Meet the pilot who quit flying because of the climate crisis

After struggling for years to finance his training, commercial pilot Todd Smith swapped his wings for climate activism 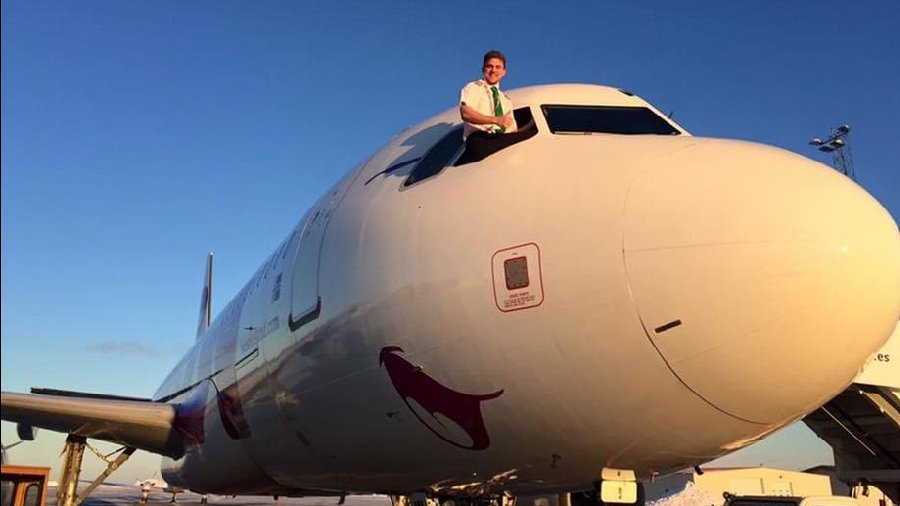 Born into a family of modest means on the outskirts of London, Todd Smith didn't grow up taking much for granted. Except, perhaps, his father's repeated insistence that he should choose a job he loves. For many, that's the challenge of a lifetime. Not for Todd.

From the moment he was taken to a watch a local Royal Air Force aerobatics display, he knew his future was written in the skies. "I was just in absolute awe of these nine aircraft flying wing to wing. That was the beginning of my journey." He was 5.

It could have been a passing phase, but his young mind had been captivated. As he got a little older, he started playing flight simulator games and by the age of 11 he was knocking on the door of the nearest branch of the air cadets asking them to bend their minimum age rules to let him join the squadron. Surprisingly, they agreed.

He went twice a week for years, and though his enthusiasm remained very much alive, with an RAF career out of reach and without the €150,000 ($162,000) necessary to train as a commercial pilot, by the time he was 16 his dream of flying started to "feel like a distant reality."

A family effort to find the necessary money

Instead, Todd went to London to become an apprentice electrician, and spent a few years moving from job to job — none of which came close to flying. "I feel very at home in the air. It gives me this feeling of freedom and tranquility," he told DW.

When he decided to take out a bank loan to train for his private pilot's license, his family saw what it meant to him and rallied to raise the money for commercial training.

Over five years, through a combination of his grandmother selling her house to move in with Todd's parents, them remortgaging their home and Todd using his own wages, he officially became a commercial pilot.

'Getting your hands on an actual jet was... nothing can ever really compare to be honest'
Deutsche Welle

"The examiner said to me afterwards 'you're a credit to aviation and you're going to go very far in your professional career.' My mum and dad were there. It was incredible really."

The last thing on his mind at that moment — or over the next three years as he flew vacationers across Europe and began climbing the ranks of his profession — were the greenhouse gas emissions the aviation industry generates annually.

Slow burn of an environmental epiphany

But that began to change in 2018, when a gut inflammation forced Todd to take a break from the pilot's cabin. It was the last thing he wanted and he was so "desperate to get back to flying as soon as possible" that he accepted a doctor's challenge of trading his meat-eating habits for an almost exclusively plant-based diet.

During this time, he watched a couple of documentaries that highlighted how animal agriculture damages the climate and environment.

"It really hit home." Hard enough to make him commit to veganism and start "reading up on climate science." When, in a strange twist of fate during his medical leave, a tick bite in a London park left him with Lyme disease and grounded for even longer, he began to dig deeper.

'It was a bittersweet moment. The guide told us that Peru was one of the first places to be hit by climate change'
Deutsche Welle

As he dug, he had a retrospective dawning of realization. He recalled a bittersweet moment from a couple of years earlier when he had stood on the brightly colored Rainbow Mountain in Peru. "There were people walking up and down it like ants. It was so beautiful, but we shouldn't have been able to see it at all."

Its glorious colors had previously been hidden under a blanket of snow, melted by warming temperatures. He had, in seeing the mountain, been a "firsthand witness to the impacts of climate change and mass tourism."

Todd could no longer deny that he'd been in denial. And that changed everything. He delved deeper into climate science and the carbon footprint of flight. He learned that the industry is responsible for more than 2% of global emissions and that of the 80% of people who have never been on a plane, many are disproportionately affected by climate change.

"I was struck by the injustice of it all. Especially since half of those emissions are generated by 1% of the population," he said.

He started trying to explain his new insights to colleagues in the aviation industry, but didn't find many willing listeners. "At the time, Greta Thunberg was the focus of all these vile comments. I actually think the industry felt really threatened by her. She was walking the walk."

'Action on climate change means coming back to community, reconnecting with nature and an economic system that values health and well-being over GDP'
Deutsche Welle

As Todd continued to walk his own walk away from the job that had been his whole identity, he felt a sense of "responsibility and morality" that meant he couldn't return to living the way he had before. He joined the Extinction Rebellion protest movement, for whom he is now a spokesperson, and started "taking climate activism really seriously."

At the same time, he still also owed his family a lot of money. But flying to pay them back was off the cards. "I couldn't even go on a plane as a passenger now. Let alone fly one," he said.

Getting his parents to understand his change of heart and conscience has taken time, empathy, reassurance that he will pay them back and their own foray into climate action. This spring, they joined him for their first protest event.

"It was a really incredible moment. And they really do get it now, so we can share in conversations about oil companies and stuff like that."

Trying to change the aviation industry from the inside

Through his activism, Todd also met fellow aviation workers who echo his climate worries. They initially formed a casual group that has since become Safe-Landing, an organization trying to change the sector from within by challenging industry leaders to "conform with climate science and reject dangerous growth."

"With the remaining carbon budget we have, we can't continue to double air traffic every 15 years, like we have historically. We want to empower aviation workers to understand that we need to fly less if we want to ensure a long-term future in the industry," he said.

He still loves flying and misses being up in the skies. But he won't return until the industry takes its obligations seriously. In the meantime, he plans to continue honoring his own.

"As pilots, we're trained to think, free from bias, to mitigate risks, to preserve life. I'm simply following my training and trying all that I can to get the industry to mitigate its risks. After all, safety is our No. 1 priority."