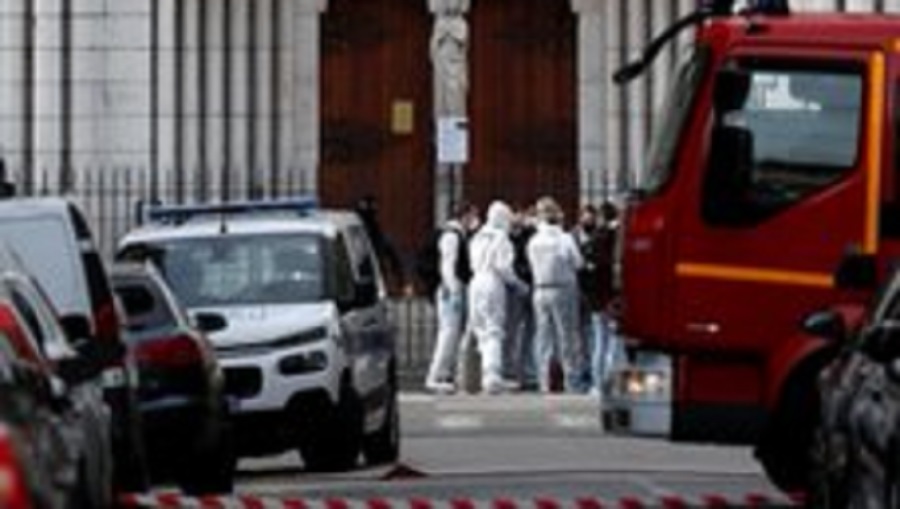 Less than two weeks after the beheading of a French schoolteacher, an assailant carrying a knife entered the towering neo-Gothic basilica in the southern city of Nice early on Thursday and killed three people, further inflaming tensions in a country already on edge and leading authorities to increase the terrorism threat level.

Officials in Nice described the attack as Islamist terrorism, and it was quickly followed by two similar events — including a knife-wielding assailant outside a French consulate in Saudi Arabia — although it was not immediately clear whether the events were coordinated.

The mayor of Nice, Christian Estrosi, told reporters on Thursday that a suspect, who has not been identified, was arrested after being shot and wounded by police. The suspect “kept repeating ‘Allahu akbar’ in front of us even though he was sedated”, Estrosi said, adding this left “no doubt” about the motivation behind the attack.

“There is a woman who quite clearly was attacked with the same modus operandi as Samuel Paty,” Estrosi told BFM TV, referring to the teacher who was killed, suggesting that the victim was also decapitated.

Prime Minister Jean Castex announced that authorities were placing the country on its highest terrorism threat level, with heightened security at places of worship, and he said the response to the attack would be “firm and relentless”.

“This attack, which is as craven as it is barbaric, plunges the entire country into mourning,” Castex told lawmakers in Paris.

Officials across the political spectrum condemned the attack, as did French Muslim representatives.

The killings in Nice come at a sensitive time for France, which is still shaken by the beheading of the teacher, Paty, and is about to enter a month-long lockdown to slow the spread of the coronavirus.

Since Paty’s killing by a young Muslim man offended that the teacher had shown cartoons of the Prophet Muhammad in a class on free speech, French authorities have undertaken a broad crackdown against what they characterized as Muslim extremists in France, conducting dozens of raids, temporarily closing a major mosque and disbanding a Muslim aid group that authorities have accused of “advocating radical Islam” and hate speech.

Those measures have found widespread support in a nation still traumatised by Islamic State-inspired terrorist attacks in recent years — including two that killed a total of more than 200 people.

But President Emmanuel Macron’s vow that France would protect the right to caricature the Prophet Muhammad has drawn harsh criticism in the Muslim world. And the tone of some of Macron’s ministers — one of them said he objected to kosher or halal aisles in supermarkets — has left the country’s Muslim population of about six million people feeling increasingly alienated.

While it is not yet clear whether the attack on Thursday was carried out in response to the government’s measures, it immediately fortified calls among French authorities for even tougher efforts to combat Islamic extremism in ways that are almost certain to deepen the polarisation of the country.

“Enough is enough,” Estrosi said. “It is now time for France to exempt itself of peacetime laws to permanently annihilate Islamo-fascism from our territory.”

Macron himself has vowed to crack down on what he called “Islamist separatism” with a range of measures aimed at countering extremism within the Muslim community.

The measures include placing stringent limits on home-schooling and increasing scrutiny of religious schools, making associations that solicit public funds sign a “charter” on secularism and phasing out the widespread practice of bringing over foreign imams to work in France while investing in home-based training of imams.

After the attack in Nice, at the city’s largest church, Notre-Dame de L’Assomption, France’s antiterrorism prosecutor said that the office had opened an investigation into terrorism-related offences.

Two of the victims were killed in the church itself, while a third died after taking refuge in a nearby bar, the mayor said.

Mohammed Moussaoui, the president of the French Council of Muslim Faith, asked in a Twitter post that French Muslims cancel all Mawlid festivities, which celebrate the birthday of the Prophet Muhammad, “as a sign of mourning and solidarity with the victims and their loved ones”.

Not long after the attack in Nice, a man who had threatened bystanders with a handgun was shot and killed by police in the southern city of Avignon, according to local news reports. And at the French consulate in the Saudi city of Jiddah, a suspect was quickly arrested after a separate knife attack that wounded a security guard, who was hospitalised.

Lawmakers who were present at the National Assembly, the lower house of the French Parliament, observed a minute of silence on Thursday morning after hearing news of the attack.

The attack came just hours before France is scheduled to go back on a one-month lockdown because of the coronavirus pandemic, which has flared dangerously around Europe over the past weeks with a surge of cases and hospitalisations.

“I can only, once again in the very difficult circumstances that our country is going through, in the challenges it is undergoing, call on the entire national representation to unity and cohesion,” Castex, the Prime Minister, told lawmakers.

The French interior minister, Gérald Darmanin, said in a post on Twitter that he had immediately convened a crisis meeting. Macron, who joined the meeting, is expected in Nice later on Thursday.

Officials did not identify the victims, but Estrosi said one was the sacristan of the church. The Bishop’s Conference of France said in a statement that the victims were a “symbol” who had been targeted merely because they were in the basilica.

“Despite the pain that grips them, Catholics refuse to give in to fear and, with all of the nation, want to face this treacherous and blind threat,” the statement said, calling upon all church bells around France to ring out at 3pm on Thursday.