Japan: Can Kishida push through Abe's goal of constitutional reform? 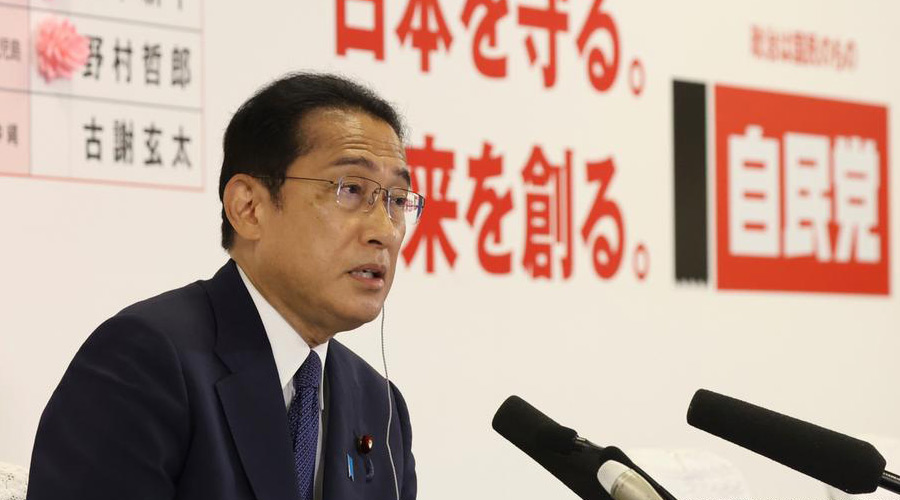 The Japanese leader now has sufficient political clout to revise the war-renouncing constitution — a long-held ambition of former Prime Minister Shinzo Abe, who was shot dead during the election campaign.

The vote took place in the shadow of the killing of former Prime Minister Shinzo Abe as he was campaigning on Friday.

A private funeral for Abe is scheduled for Tuesday.

As head of the LDP, Kishida will be present at the event before forging ahead with his policy agenda — a good deal of which was influenced by his predecessor and Japan's longest-serving premier, Abe.

For the public, two issues far outweighed all others in terms of their importance: the economy and national security.

The LDP and its junior partner Komeito won 76 of the 125 seats up for grabs in the upper house. The coalition now has 146 seats in the 248-seat chamber — far beyond the majority.

Importantly, the results give the LDP-led coalition and two opposition parties, which are open to revising the nation's pacifist constitution, a two-thirds majority in the upper house.

That group of four parties also has the necessary seats in the more powerful lower house.

To propose a constitutional amendment, both houses of parliament need to support it by a two-thirds majority.

On Monday, Kishida reportedly said he will push forward efforts to hold a referendum and revise the constitution.

"I would like to push forward efforts that would lead to the proposal (of a revision) as soon as possible," Kishida was quoted by Kyodo News as saying at a press conference on the LDP's election performance.

Revising elements of the constitution that ultraconservatives believe were forced upon a defeated Japan by the victors at the end of World War II was one of Abe's dearest political ambitions.

He had long sought to turn the country's Self-Defense Forces into a full-fledged military. But during his more than seven years in power, Abe was never able to achieve that aim. Now, immediately after his death, it looks to be a political likelihood.

"Now that the results are in, it looks very much as if Kishida is in a very strong position," said Hiromi Murakami, a professor of political science at the Tokyo campus of Temple University. "He has a large majority and the support of several of the smaller parties, and he does not have to face an election for another three years now.

"The fundamentals would appear to be in place, but we should never take anything for granted in Japanese politics, as we have just witnessed with the death of Abe," she pointed out.

"Kishida has plans to revive the national economy and address the security issues that Japan faces, but Abe was a very powerful and important supporter of his policies and I wonder whether losing that support may make it harder for him to reach all his legislative goals," Murakami added.

Abe had been the dominant player within the LDP for more than a decade and it is widely assumed that he held great influence over the administration that followed his own after he decided to step down at the end of a second stint as prime minister in September 2020.

Arguably the most immediate problem that Kishida needs to deal with is the state of the Japanese economy. Growth was weak even before the coronavirus pandemic further dented the economy, with companies in sectors such as tourism and hospitality struggling particularly and requiring assistance to stay afloat. Even with the pandemic apparently waning, the war in Ukraine has played further havoc with domestic firms.

Kishida is tasked with bringing the soaring prices of daily necessities — including food and fuel — under control, keeping inflation within acceptable boundaries and raising wages.

"The problem that he faces is that because of the reluctance to raise interest rates and potentially further weaken the economy, Kishida really only has the option of issuing new bonds and increasing the national debt," said Go Ito, a professor of politics at Tokyo's Meiji University.

And while he is struggling to right the nation's economy, Kishida must also wrestle with a rapidly worsening security situation on the nation's borders.

"I read that 80% of the candidates said that if they were elected, they would increase Japan's defense spending, which is a very high number," Ito said. "I've never seen security play such an important role in the election, but that's just a reflection of the state of the world at the moment.

"Every night, we watch the news and we see what is happening in Ukraine, and that frightens people," he said. "Until now, Japan has spent about 1% of GDP on defense, but the feeling is that it has to rise to 2% — and not many people are disagreeing."

Murakami concurs. "Before the Ukraine crisis, people had very little understanding of what a war would look like, but now we see it on the news and what was previously just a vague worry is now a very serious and immediate threat," she said.

Over the last decade, China has gradually been expanding its territorial claims and military capabilities. North Korea, meanwhile, remains unpredictable and appears to be steadily building up its nuclear and long-range missile capabilities.

And Russian military forces have also been exercising vigorously in the Pacific in recent months as a show of force.

While Abe was never able to gather sufficient political support to revise the sections of the constitution that specifically limit Japan's right to operate military forces, Kishida's latest victory gives him the two-thirds majority in both houses of the Diet to institute change.

"I expect that a proposal on rewriting the constitution will be put forward within a year, with the simplest issues — such as formalizing Japan's right to have military forces — fairly easy to introduce," Ito said.

At present, Article 9 of the constitution states that Japan renounces war as a sovereign right and declares that "land, sea and air forces, as well as other war potential, will never be maintained."

The result of this is that Japan has what it labels Self-Defense Forces, although ultraconservatives have long proposed an amendment that would state Japan does have the right to have a military force.

Abe stated on several occasions that he hoped that Japan could become a "normal nation" that was able to play a larger role on the world stage. Sunday's election has given Kishida the political clout to do precisely that.