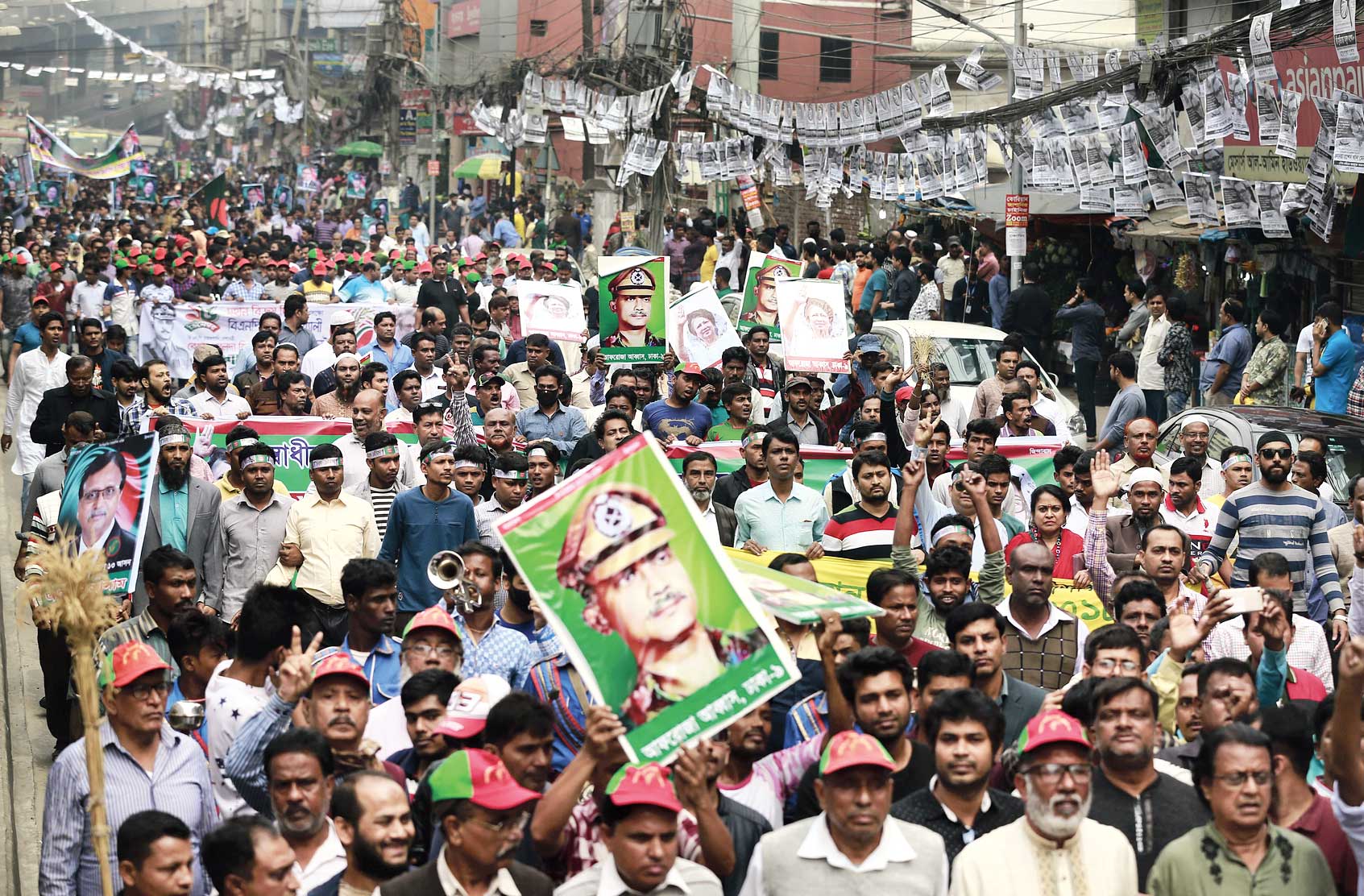 Many an elephant may be in the room for political parties in Bangladesh but leaders of the Jatiya Oikya Front (National Unity Front), an Opposition platform, are saddled with a moot question: their stand on the Jamaat-e-Islami.

The Jamaat has 21 candidates in the fray with the paddy-sheaf symbol that the other constituents of the front are also using for the December 30 polls.

Paddy sheaf is the symbol of the country’s main Opposition force, the Bangladesh Nationalist Party, which has had a long alliance with the Islamist party.

As the poll date nears, the Front — floated this October with the goal of building the country with the spirit of the liberation war — and its secular face, Kamal Hossain, a jurist who played a role in drafting the country’s Constitution, are showing signs of nervousness on justifying the Jamaat’s presence in the rainbow alliance.

The Jamaat is not registered with the poll panel. So its nominees are contesting under the symbol of the BNP, which is headed for the elections without its chairperson Khaleda Zia who is in jail on corruption charges and her exiled son Tareq Zia.

The Bangladesh media are abuzz with reports that the BNP, as part of a strategy to keep its old ally happy, has fielded weak candidates in some seats to ensure the victory of some Jamaat nominees, who are contesting as Independents.

The discomfort in the Opposition camp tumbled out into the open last Friday when Hossain was asked about contesting under the same banner as the Jamaat.

Hossain told the reporters to “shut up” before attributing motive to such questions.

“The association with the Jamaat is surely the elephant in the room for Front leaders like Hossain, who have always tried to be flag bearers of secular politics…. Now, as they are part of a forum that has nominees from a party that believes in the agenda of creating an Islamic state with the Sharia legal system, they need to explain their stand to the people,” said an observer in Dhaka.

A significant majority in Bangladesh, where Muslims account for around 90 per cent of the population, are secular and votaries of a liberal atmosphere. Even among the religious-minded, the Jamaat doesn’t have acceptance because it had opposed the independence of Bangladesh and several of its top leaders had colluded with the Pakistani Army during the country’s nine-month war of independence in 1971.

As Bangladesh celebrated Bijoy Dibos or Victory Day on Sunday, the question on the Jamaat stood out. The ruling Awami League has already started highlighting the presence of radical Islamists in the Front.

After Hossain’s comment went viral on social media — he did issue a written regret on Saturday — Prime Minister Sheikh Hasina questioned whether people like Hossain did not feel ashamed of “joining hands with war criminals and corrupt persons”.

“Will the people keep mum if you tell them to shut up?” Hasina, who faces anti-incumbency after being in power for 10 years, asked, referring to Hossain’s remarks.

The Opposition parties, on their part, accuse the Awami League of using the administration to rob them of a “level playing field” by citing instances of arrests and detentions of their leaders.

A political observer in Dhaka said there might be grievances against the government, “but the Jamaat association in the Opposition camp is unlikely to go down well with the voters”.

The observer said the Jamaat connection would cause collateral damage to the Front as some western countries — that have often echoed the Opposition’s concerns about the absence of a democratic environment — have been expressing their reservations about the Islamist party’s presence in the Opposition camp.

Several sources in Dhaka said that when the Front — including the likes of Hossain and freedom fighters like A.S.M. Abdur Rab — was formed, it did create some excitement as it threw up the possibility of a secular force that could take on the might of the ruling Awami League. That expectation, many feel, has been dashed in the run-up to the polls.

“It is becoming increasingly clear that the BNP got someone like Hossain only to add to its credibility in the absence of Khaleda and her son,” said a source in Dhaka.