Israel: Remembering the Holocaust on TikTok

More than 80 years after end of war, the debate about how to deal with it is changing 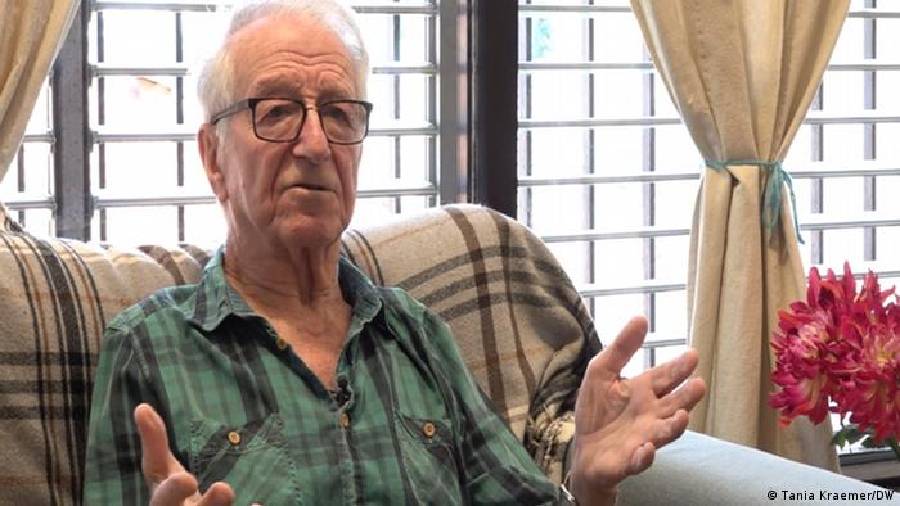 Gidon Lev has become somewhat of a sensation on TikTok where he relates his Holocaust experiences for a young audience
Deutsche Welle
Deutsche Welle   |   Published 28.04.22, 08:03 PM

Gidon Lev captures some of his memories on TikTok with music, memes and hashtags. Lev, who survived the Holocaust as a child, talks about his experiences. At 87, he has struck a chord especially among young users, some of whom refer to him as their "TikTok grandpa."

"I just think, in spite of so much horror, so much suffering, so much pain, so much cruelty, there are also good things in life and good people. You have to sometimes look for them and find them, but they're there," Lev says, adding that "young people can make the world a better place. Your life is before you. You can make it better."

Lev was born in 1935 in Carlsbad, today's Karlovy Vary in the Czech Republic. When he was six-years old, he was taken with his parents to the concentration camp and Ghetto Theresienstadt (Terezin) near Prague, where his parents were put into forced labor: his father toiled in a nearby mine, and his mother worked with other women to process the mineral mica.

"From time to time the Germans did what we call a Stichprobe," Lev says, using the German word for a random sample. Women were checked for how many stones they processed. "I suppose those women who did the indicated amount were able to stay. If they stayed, their children stayed. I guess this I owe to my mother because she must have worked hard, did enough and stayed to the very end. That is why I'm here today."

His father didn't survive. He was deported by the Nazis from Theresienstadt to the concentration camp in Auschwitz in Germany, where he was murdered. In all, Lev lost 26 of his relatives in the Holocaust. In one of the clips he recorded, Lev showed a pendant which his father had given to his mother as he was forced onto the train which took him to Auschwitz.

After the war in 1945, he and his mother briefly returned home, and then made their way to the United States and later to Canada. In 1959, Lev emmigrated to Israel.

Despite all the hardship and tragedy, Lev considers himself an optimist and doesn't want to be defined solely as a survivor of the Holocaust. But he is concerned about those who keep on denying what happened to millions of Jews and other people persecuted by the Nazis. He is also concerned about those who spread antisemitism today, particularly on social media. "I know it's there. And it doesn't take too much to bring the hatred and the cruelty to the surface. We've seen it."

Against antisemitism and Holocaust deniers

During the coronavirus pandemic, Lev called on followers of his TikTok videos not to compare measures like wearing protective face masks with Nazi tactics. He also sharply criticized those who opposed vaccination by attaching a yellow star on their clothing: under Nazi rule, every Jewish person had to wear a star of David in yellow.

"I was so angry at that because this mask we wear is to protect ourselves and others from getting sick and sometimes even dying," he says. Describing the yellow star, he says, "This was the very opposite. This was to separate Jews from the rest of the population. To isolate, to embarrass, humiliate. It was not for their protection, but to demonize them in a way."

Lev and his partner, Julie Gray, who produces the videos, are surprised by the success of their videos which have been viewed and liked by millions.

In fact, the TikTok videos were meant to help sell the book Lev and Gray wrote together: "The True Adventures of Gidon Lev." But it has long turned into something more. "For me the importance of using TikTok is that there is an astonishing lack of Holocaust education among young people," says Gray, who is an editor. "So, on TikTok you can use a medium that young people like, with music and memes and hashtags, and teach something at the same time."

It is not about getting Holocaust education across in 30 seconds. "What we do is inspire curiosity, to get people to say: 'I want to learn more.'" "We have to ask ourselves how we're teaching about the Holocaust. Is it up to date? Is it reaching people?" says Gray.

This changing landscape of remembrance has been closely followed by Noa Mkayton, Director of the Overseas Education and Training Department at the International School for Holocaust Studies at Yad Vashem, Israel's central Holocaust memorial in Jerusalem. The culture of remembrance is never static and is constantly changing, she says. And more than 80 years after the end of the World War II, there is another important reality: The generation of Holocaust survivors will soon be gone. Personal encounters that bring eyewitnesses and young people together, are becoming fewer and fewer.

Ahead of Holocaust Remembrance Day, Israel's Central Bureau of Statistics said that about 165,000 people living in Israel are recognized by the state as Holocaust survivors.

"It has a huge impact, because it kind of removes a very personal connection with the subject, such as 'this is my grandma, this is my grandpa,'" says Mkayton, referring to the third and fourth generation of Holocaust descendants in Israel.

New forms and expression of remembrance are also emerging among the younger generation. "The question is: how can I express myself and what tool do I use? And if TikTok is used, for example, then my output is simply a minute long and no longer a long, introverted, balanced inside view. The language just changes," Mkayton says. "We as educators and teachers might not be happy about it, but we must accept and deal with it."

The debate over remembrance is not new. "Even 20 years ago, when teachers were walking with their ninth graders through memorials, those teachers would panic and fret on the bus whether students would take out their gum or put down their Walkmans [as a sign of respect]," recalls Mkayton. In the end, it comes down to education. "The respect the issue demands is a question of education: How do I convey the topic to you in such a way that you understand that it also has something to do with you?"

For Lev, social media platforms — with all their advantages and disadvantages — are simply a tool to pass on his message.

"If I think sometimes of the way the Germans were cruel and so inhuman to other humans, I can't believe these same people, the same nation gave us Mozart, Bach, Handel, Brahms. And then they did what they did. How is that possible? It turns out it is," says Lev. "And I only can hope that there are enough young people who know what is right and what is good and try to make it better."