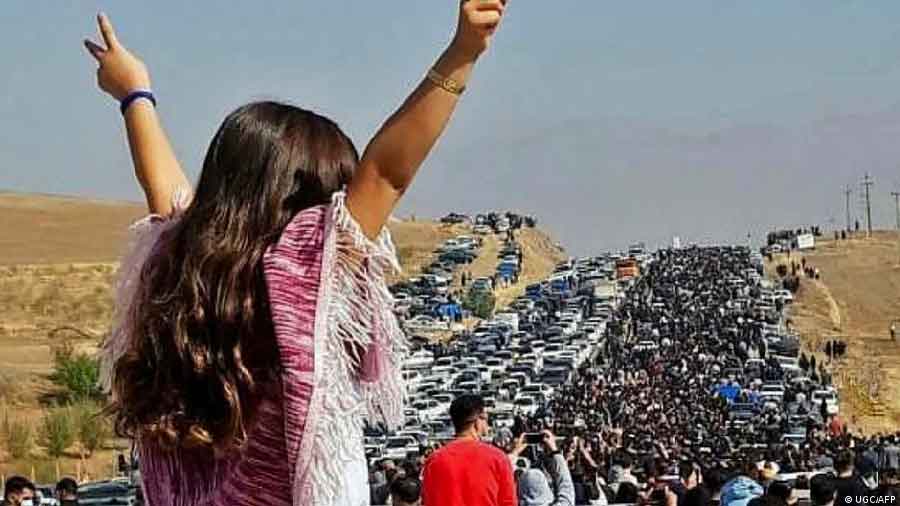 Thousands of people march to mark 40 days since the death of a young woman in the custody of Iranian authorities
Deutsche Welle
Shabnam Von Hein   |   Published 27.10.22, 09:56 PM

At the end of September, Donya Rad dared to do something that many Iranian women dream of doing every day: go out in normal clothes and sit carefree in a cafe for breakfast. She ended up sitting in jail for 11 days.

Before her arrest, Rad posted a photo of herself and her sister at the cafe, located in the traditionally religious and poorer Javadiyeh neighborhood in the south of Tehran.

Under the picture she wrote, "while working, we took a short break to have breakfast."

A day later, her sister, Maryam (name changed), tweeted that Rad had been arrested.

"It may sound ridiculous, but all we want is a simple, normal life," the 21-year-old student told DW.

"My dream is to be able to go to college in normal clothes, go out with my friends, laugh and be happy without the constant fear of being arrested," she said.

In September, 22-year-old Jina Mahsa Amini died while detained by Iran's "morality police" for not properly wearing a hijab, or Islamic headscarf. Her death sparked the largest Iranian protest movement seen in years.

Demonstrations spearheaded by women calling for an end to strict rules on behavior and appearance began in Amini's home province of Kurdistan.

They soon spread around Iran and grew in scope and intensity as authorities cracked down violently. More than 200 protesters have been killed, according to Iran Human Rights.

"Anger unites Iranian women from all strata of society," Iranian writer and activist Shadi Amin told DW. Amin is based in Germany and is an advocate of LGBTQ and minority rights in Iran.

"Iranian women are fighting for minimal and basic rights. The state determines how women are allowed to appear in public. It has systematically disenfranchised female citizens for more than 40 years," Amin said.

"But even if they conform to all the rules and laws — for example, wearing headscarves everywhere every day — they live in danger of being arrested and beaten to death just like Jina Mahsa Amini," she added.

Iranian police deny being responsible for the death of Amini. And those who oppose the authorities and join the peaceful protests on the streets run the risk of being killed by security forces.

Take the example of 32-year-old Ghazaleh Chalabi. On October 20, smartphone video footage from September taken by Chalabi of protests in her hometown of Amol in northern Iran was posted on social media.

The video shows a smoky public square at night, partially lit by flaming debris. Chalabi can be heard shouting, "don't be afraid, we are all together." Then shots ring out, fired into crowd by security forces.

Seconds later, the phone drops to the ground face up as Chalabi is struck by a bullet and killed. It records the faces of shocked demonstrators, screaming and asking her if she is still alive.

A long fight for basic rights

"Women are aware of the brutality of the security forces," said Amin.

"Yet they go out into the streets and protest. They know that they will not have a good future if the political system continues like this. They are educated, well-informed. They don't take inequality as self-evident," she added.

According to official figures, 60% of students in Iran are female. However, the share of women in the labor market is only 15%.

Women in Iran face systemic hurdles in leading an independent and self-determined life.

In Iran, Sharia-based laws regulate how women can dress and behave. Fathers and husbands make many of the important decisions in a woman's life. And there is widespread and systemic gender discrimination.

In the 2022 World Economic Forum's (WEF) "Gender Gap Report," the country ranks 143 out of 146 in an international comparison of gender equality indicators.

Above all, the lack of women's political participation played an important role in Iran's poor ranking. Germany, for example, was moved up one rank to 10th spot in the latest report because of the growing participation of women in politics.

In the Islamic Republic of Iran, however, there is no place for women in the power structures. They cannot become religious leaders. They are not allowed to run for president, and they are excluded from the judiciary. Women are barred from important bodies such as the Council of Experts, the Council of Guardians or the Council of Arbitrators.

"My parents want me to emigrate, like my cousins," said student Maryam. "It won't be easy for them. But they know I won't have an easy life here. Many Iranian women who emigrate have success abroad and a good life. But I want to stay. Who knows, maybe this time the country will change."