Iran says it handed over documents on nuclear activities to UN 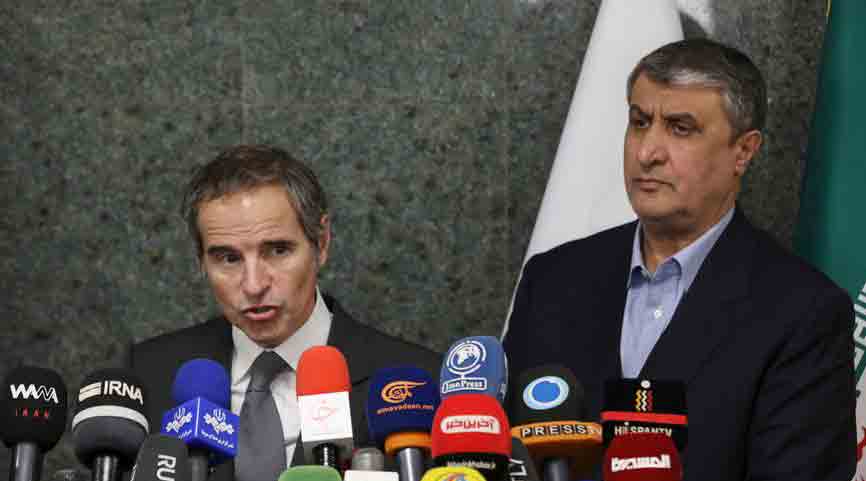 The head of the Atomic Energy Organization of Iran Mohammad Eslami (right in picture) said his government had turned over documents to the IAEA. Eslami and IAEA director Rafael Grossi appeared together at a press conference last month
Deutsche Welle
Deutsche Welle   |   Published 06.04.22, 09:50 PM

Tehran said it had given over documents sought by the UN's nuclear body pertaining to its nuclear program. Iran is hoping the International Atomic Energy Agency will shut down investigations into undeclared sites.

Iran's nuclear chief Mohammad Eslami said on Wednesday that his country had handed over documents pertaining to the country's nuclear program to the UN's nuclear oversight body. He also demanded that investigations into uranium detected at three undeclared sites be shut down.

The UN nuclear watchdog, the International Atomic Energy Agency (IAEA), agreed to a three-month plan with Iran to try and move past the unresolved matter of uranium particles located at three old but undeclared nuclear sites.

A negotiated resolution would remove a barrier to reviving the 2015 Iran nuclear deal known as the Joint Comprehensive Plan of Action (JCPOA). Washington unilaterally exited the deal in 2018 under former President Donald Trump and reimposed stiff sanctions against Iran.

What did Tehran's nuclear authority say?

Elsami told a televised news conference, "We have handed over the documents on March 20 to the agency. They are reviewing those documents and probably the agency's representatives will travel to Iran for further talks and then the IAEA will present its conclusion."

Eslami added that he expected IAEA inspectors would visit Iran "to review the answer," and would finish a report on the subject by late June.

He also used the news conference to slam regional adversary Israel and accuse it of "sowing doubts" about the purpose of the country's nuclear program.

What has the IAEA said?

The IAEA has long said Iran had so far provided unsatisfactory answers to its questions. However, in early March, the IAEA announced a plan for talks.

Rafael Grossi, the IAEA chief, said in February that he hoped to provide his conclusions in time for the Board of Governors meeting, which kicks off on June 6.

Washington and Iran have spent the last eleven months engaged in dialogue in Vienna to revive the JCPOA, though talks have stalled.

US intelligence agencies, Western nations and the IAEA have all said Iran maintained an active nuclear weapons program until 2003, which Iran denies.

What is the current state of Iran's nuclear program?

Iran is currently enriching uranium of up to 60% purity. This is its highest level ever and a minor technical leap would bring it from 60% purity to weapons-grade levels of 90%. It also far exceeds the JCPOA's 3.67% cap.

Nuclear nonproliferation experts remain concerned Iran could be nearing the threshold of enough fissionable material for an atomic weapon.