Advertisement
Home / World / In closed hearing, a clue about ‘the heart’ of Mueller’s Russia inquiry 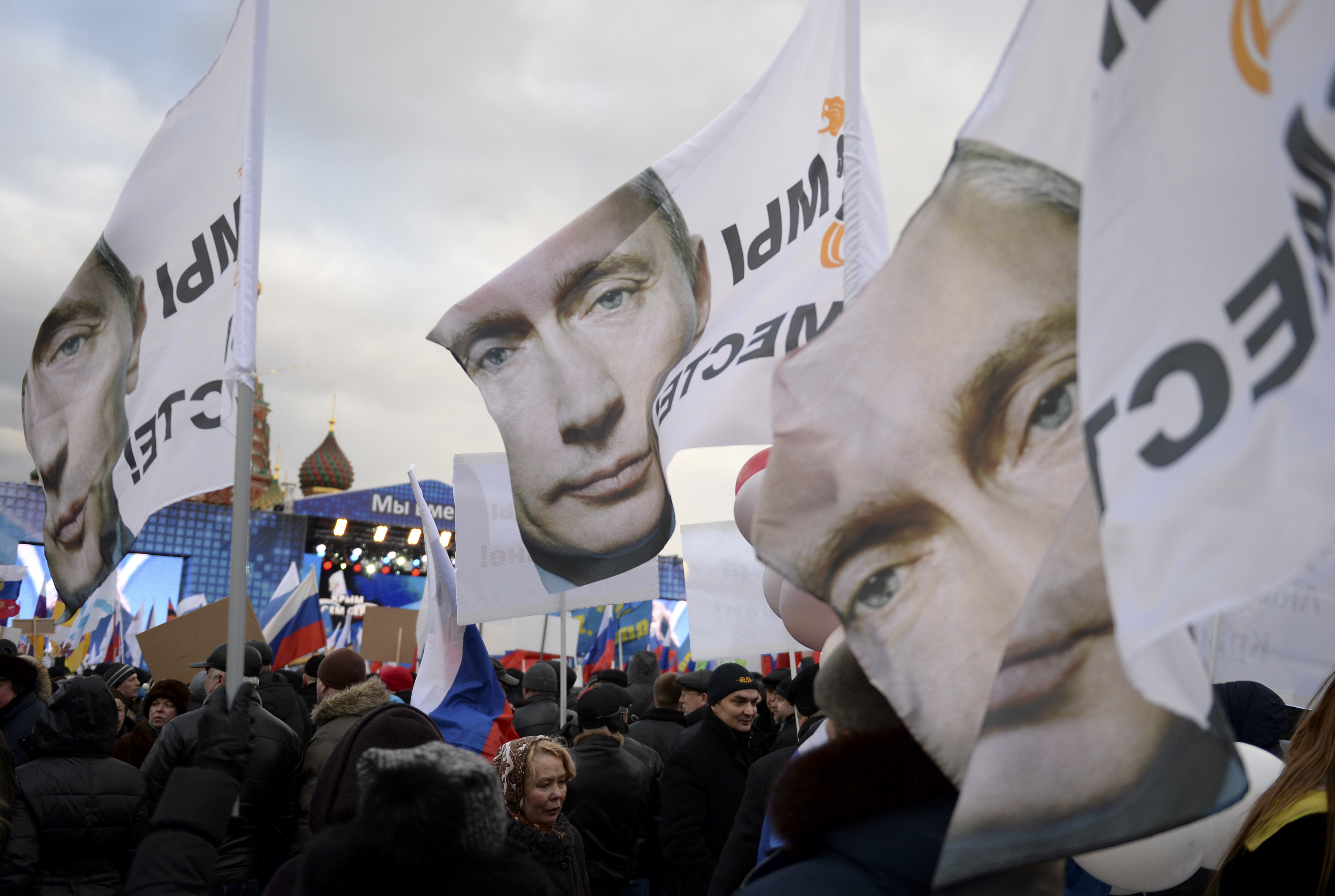 Banners in Moscow's Red Square bear the portrait of Russian President Vladimir Putin and the slogan “We Are Together,” referring to Russia and Crimea, which Russia seized from Ukraine.
The New York Times file photo
Sharon LaFraniere, Kenneth P. Vogel And Scott Shane/NYTNS   |   Washington   |   Published 11.02.19, 05:02 AM

Of the few hints to emerge from special counsel Robert Mueller about evidence of possible collusion between President Donald Trump’s campaign and Russia, one of the most tantalising surfaced almost in passing in a Washington courtroom last week.

Comments by one of Mueller’s lead prosecutors, disclosed in a transcript of a closed-door hearing, suggest that the special counsel continues to pursue at least one theory: while Russia was taking steps to bolster Trump’s candidacy, people in his orbit were discussing deals to end a dispute over Russia’s incursions into Ukraine and possibly give Moscow relief from economic sanctions imposed by the United States and its allies.

The theory was offered almost as an aside by the prosecutor, Andrew Weissmann, during a discussion of contacts between Trump’s former campaign chairman, Paul Manafort, and a longtime Russian associate, Konstantin Kilimnik, whom investigators have linked to Russian intelligence.

A closer look at the transcript, released late on Thursday, shows that the prosecutors have been keenly focused on discussions the two men had about a plan to end the conflict that followed Russia’s invasion of Ukraine and annexation of Crimea in 2014. Persuading the United States to ease or end the US-led sanctions imposed to punish Moscow for its aggression has been a primary goal of Russian foreign policy.

According to the transcript, which was heavily redacted, Manafort and Kilimnik repeatedly communicated about a so-called peace plan for Ukraine starting in early August 2016, while Manafort was still running Trump’s campaign, and continuing into 2018, months after Manafort had been charged by the special counsel’s office with a litany of crimes related to his work in the country. The prosecutors claim that Manafort misled them about those talks and other interactions with Kilimnik.

Pressed by the judge at Monday’s hearing to say why Manafort’s alleged lies mattered, Weissmann gave a broad hint about the thrust of the investigation.

“This goes to the larger view of what we think is going on, and what we think is the motive here,” Weissmann said. “This goes, I think, very much to the heart of what the special counsel’s office is investigating.”

Weissmann did not elaborate. The hearing’s purpose was narrow — determining whether Manafort had breached his plea agreement by misleading the prosecutors about Kilimnik and other matters. Kilimnik was charged last June with conspiring with Manafort to obstruct justice by trying to shape the accounts of prospective witnesses in Manafort’s case.

Yet Weissmann’s cryptic comments suggest that the special counsel’s investigation — which Trump has sought to dismiss as a witch hunt and which acting Attorney General Matthew Whitaker has said will wrap up soon — is still pursuing the central question of whether there was some kind of deal between Russia and the Trump campaign.

To date, prosecutions by the special counsel have skirted that question. They have laid out Russia’s hacking, leaking and social media manipulation, most of it in favor of Trump. They have charged multiple Trump aides with lying, including the President’s first national security adviser, Michael Flynn, who admitted misleading the FBI about his discussions with the Russian ambassador about sanctions.

Trump’s longtime friend Roger Stone was indicted last month on charges of lying to Congress about his efforts to contact WikiLeaks, which released tens of thousands of Democratic emails stolen by the Russians.

But the essential question of why the Kremlin bet so heavily on Trump, and whether President Vladimir Putin of Russia had any indication that Trump would give him what he desired, has remained unresolved.

Sen. Richard Burr, R-N.C., who is chairman of the Senate Intelligence Committee, told CBS News on Thursday that, based on the evidence they have seen, the committee’s investigators “don’t have anything that would suggest there was collusion by the Trump campaign and Russia.”

But Weissmann’s remarks seem to suggest that for the special counsel, at least, that avenue of inquiry is still alive.

The sanctions have inflicted substantial pain on the Russian economy. As a candidate and a new President, Trump seemed skeptical that such punishment was necessary or effective.

As Trump took office, some State Department officials described worrying inquiries that suggested the White House might be preparing to precipitously drop the sanctions. And various intermediaries floated proposals they said would end the sporadic combat in eastern Ukraine between Russian-funded separatist fighters and Ukrainian forces trying to hold back the loss of more territory.

Kilimnik, meanwhile, was trying to use his extensive ties to Manafort to advance another. It envisioned the return of Viktor Yanukovych, a pro-Russia politician who had risen to the presidency of Ukraine in 2010 with the help of Manafort, who was paid tens of millions of dollars for his efforts.

Yanukovych was forced from office by a popular uprising in 2014 and fled to Russia. Kilimnik wanted to resurrect him as a semiautonomous leader in eastern Ukraine, a division of the country fiercely opposed by most Ukrainians.

In a February 2017 interview with The Times, Kilimnik described Manafort as a possible negotiator for the deal. He said that Manafort had told him that “there is only one enemy — the chaos.”

“If there is a serious project that can bring peace to Ukraine, Manafort will be back,” Kilimnik said at the time.

The first discussion between Manafort and Kilimnik cited by the prosecutors took place on August 2, 2016, at the Grand Havana Room in Manhattan, and also included Rick Gates, Manafort’s deputy on the Trump campaign and during his Ukraine work. Weissmann noted that Manafort and Gates tried to avoid drawing attention at that meeting, leaving separately from Kilimnik.

“That meeting and what happened at that meeting is of significance to the special counsel,” Weissmann said at the hearing.

Manafort initially told prosecutors he had dismissed Kilimnik’s proposal out of hand, Weissmann said. In fact, according to the transcript, Manafort and Kilimnik talked about the proposal again in December 2016; in January 2017, when Kilimnik was in Washington for Trump’s inauguration; and again in Madrid the next month.

Weissmann noted that those talks went forward despite the “enormous amount of attention” in the United States at the time to contacts between Russians and Trump associates.

Manafort’s lawyer, Richard Westling, suggested the discussions were not all that memorable to Manafort because he had minimal interest in advancing Kilimnik’s plan. Although the two men revisited the proposal after Trump’s election, he said, “there is no real follow through.”

Westling said it was not the only such plan afloat — nor was it the only one proposed by Kilimnik, who has denied having ties to Russian intelligence. Kevin Downing, another lawyer for Manafort, argued that suspicions about Kilimnik’s communications were “nonsense” because “the sanctions were going to continue against Russia” whether or not Trump was elected.