The Taliban’s strategy of coercion and persuasion was repeated across the country, unfolding for months as a focal point of the insurgents’ new offensive this year 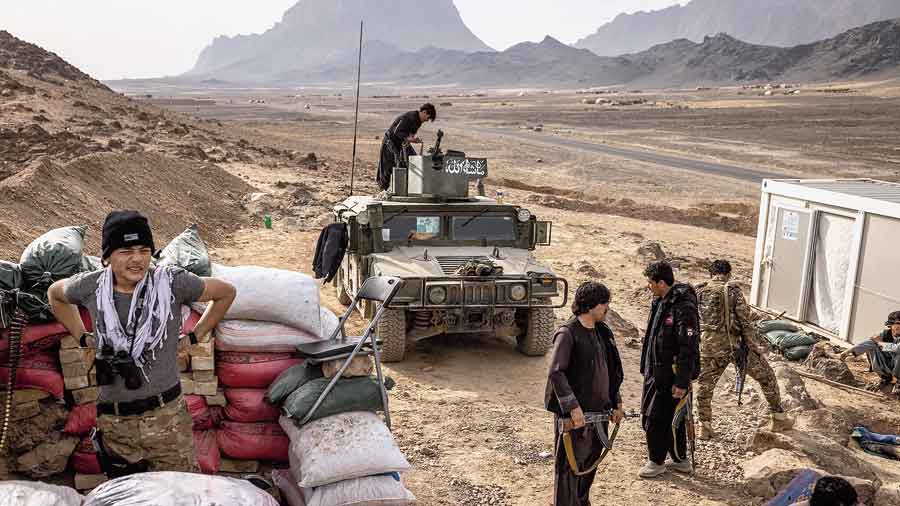 Afghan security forces at an outpost on the periphery of Panjwai, Afghanistan, in January this year.
Jim Huylebroek for The New York Times
David Zucchino   |   Published 20.08.21, 12:35 AM

In early May, a Taliban commander telephoned Muhammad Jallal, a tribal elder in Baghlan Province in northern Afghanistan, and asked him to deliver a message to Afghan government troops at several bases in his district.

“If they do not surrender, we will kill them,” Jallal said he was told.

He and other tribal elders complied. After several rounds of negotiations, two government bases and three outposts surrendered without a fight. More than 100 security forces handed over weapons and equipment and were sent home unharmed.

The Taliban’s strategy of coercion and persuasion was repeated across the country, unfolding for months as a focal point of the insurgents’ new offensive this year. The militants cut multiple surrender deals that handed them bases and ultimately entire provincial command centres, culminating in a stunning military blitz this summer that put the militants back in power two decades after they were defeated by the US and its allies.

The negotiated surrenders were just one element of a broader Taliban strategy that captured heavily defended provincial capitals with lightning speed, and saw the insurgents walk into the capital, Kabul, on Sunday with barely a shot fired. It was a campaign defined by both collapse and conquest, executed by patient opportunists.

Each surrender, small or large, handed the Taliban more weapons and vehicles — and, vitally, more control over roads and highways, giving insurgents freedom to move rapidly and collect the next surrenders as the security forces were progressively cut off from ammunition, fuel, food and salaries.

Each victory also added to a growing sense of inevitability that the Taliban would eventually prevail, especially after the militants poured so many resources into winning the north, a traditional stronghold of anti-Taliban militias. As those outposts and districts fell, the Taliban gained important propaganda victories, quickly spreading the word that they could overcome even dogged resistance, and would keep their word to allow soldiers and policemen to walk away with their lives.

The result was a lopsided fight between an adaptable and highly mobile insurgent juggernaut, and a demoralised government force that had been abandoned by its leaders and cut off from help. Once the first provincial capital city surrendered this month, the big collapses came as fast as the Taliban could travel.

The Taliban triumph came just four months after President Joe Biden announced on April 14 that he would honour a deal with the Taliban signed by the Trump administration to withdraw all American troops beginning May 1. The announcement sank the morale of already beleaguered security forces and emboldened the Taliban, which had failed to honour most pledges under the February 2020 agreement.

The Taliban seized the advantage in May, crushing government troops now forced to defend themselves. The militants quickly expanded their control among the country’s 400-odd districts from 77 on April 13 to 104 on June 16 to 223 on August 3, according to the Long War Journal at the Foundation for Defense of Democracies.

The Taliban also received money, supplies and support from Pakistan, Russia and Iran, analysts said. That included 10,000 to 20,000 Afghan volunteers sent from Pakistan.

The volunteers swelled Taliban ranks to more than 100,000 fighters from most analysts’ estimates of 60,000 to 70,000, London-based analyst Antonio Giustozzi said. That was more than enough to crush a government force listed at 300,000 on paper but hollowed out by corruption, desertion and a staggering casualty rate.

The key to victory, Giustozzi and other analysts said, was the Taliban’s plan to threaten and cajole security forces and government officials into surrendering.

“They contacted everyone and offered the chance to surrender or switch sides, with incentives, including money and rewarding people with appointments afterward,” said Giustozzi, the author of the 2019 book The Taliban at War.

The Taliban exploited Afghans’ resentments toward a corrupt and ineffective government that was unable to resupply its forces or mount an effective media campaign to rally the public to its side. By contrast, the Taliban pounded home a message through social media and village elders that the government was illegitimate and the militants would soon restore their Islamic rule.

Saad Mohseni, the CEO of Moby Media Group, which oversees TOLO News, the leading independent news network in Afghanistan, said: “They capitalised on intratribal, ethnic, religious and ideological differences to win over people. And they made the most of peoples’ frustrations with the government.”

The nearly 20-year war was perhaps all but won last winter, when the Taliban seized control of the country’s major highways. Government forces had only lightly defended the roadways.

That was part of a government strategy, urged by the US military, to cede rural areas and focus on protecting urban centres and major provinces.

Initially, dominance on the highways allowed the Taliban to cut off district-level checkpoints and outposts by forcing negotiated surrenders or simply overpowering outgunned security forces. By midsummer, they were able to besiege provincial capitals cut off from resupplies or reinforcements. At the same time, the militants raised millions of dollars by taxing trucks and other vehicles.

The government never recovered from the surprise summer attacks on anti-Taliban strongholds in the north, Giustozzi said.

“The Taliban adopted a strategy to push on key northern warlords to push them and their militias to defend their own areas, essentially preventing them from cohering a national defence,” Kimberly Kagan, founder and president of the Institute for the Study of War in Washington DC, wrote in an email.

To the very end last week, the Taliban continued to pursue their strategy of forcing negotiated surrenders.

By August 14, Sahaifullah Andkhoie, a pro-government militia commander in Maimana, the capital of Faryab Province in northern Afghanistan, said he had received several calls from Taliban commanders offering surrender terms.

“The Taliban were reassuring us that if we surrender, they will not kill us,” Andkhoie said. “Then I saw the Taliban were seizing weapons and ammunition of the regimental headquarters.”

That night, the entire province fell to the Taliban. Fighters and government officials surrendered en masse, handing over a trove of weapons and equipment to the militants.

For nearly 20 years, with the backing of American and Nato forces and airstrikes, Afghan government forces had been able to hold onto all 34 provincial capitals despite persistent attacks by the Taliban. That’s what made events earlier this month so extraordinary — the rapid collapse of more than 15 major provincial capitals in a span of just nine days.