Violent activities are intensifying and impact on society is spreading wider: China 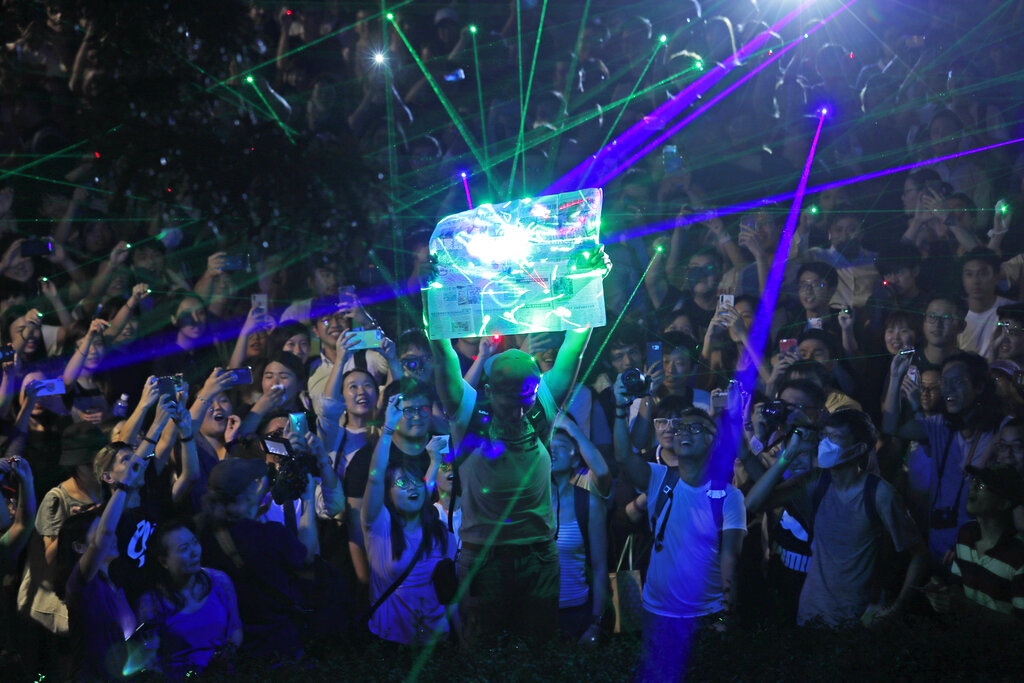 Protesters focus the laser pointers to a newspaper as they try to burn it, during a rally to demonstrate against the arrests of people caught in possession of laser pointers that police classified as offensive weapons because of their ability to harm the eyes in Hong Kong, on Wednesday
AP
Reuters   |   Hong Kong   |   Published 07.08.19, 07:51 PM

Hong Kong is facing its worst crisis since it returned from British to Chinese rule in 1997, the head of China’s Hong Kong and Macau Affairs office said on Wednesday, as more anti-government protests rocked the Asian financial hub.

“Hong Kong’s crisis ... has continued for 60 days, and is getting worse and worse,” Zhang Xiaoming, one of the most senior Chinese officials overseeing Hong Kong affairs, said during a meeting in the southern Chinese city of Shenzhen.

“Violent activities are intensifying and the impact on society is spreading wider. It can be said that Hong Kong is now facing the most severe situation since its handover,” he said.

Hong Kong has faced months of sometimes violent protests that began with opposition to a now-suspended extradition law and which have evolved into a direct challenge to the government of embattled leader Carrie Lam and calls for full democracy.

Hong Kong’s protests, which continued on Wednesday, pose a major challenge to Chinese President Xi Jinping who is grappling with a trade war with the US and a slowing economy.

Zhang held a forum on Wednesday to discuss the political crisis in Hong Kong which included Hong Kong delegates to China’s parliament, the National People’s Congress and China’s main consultative body, the CPPCC. No Opposition democratic figures or protest representatives were invited.

Speaking after the meeting, several attendees said Zhang cited speeches by former Chinese paramount leader Deng Xiaoping in 1984 and 1987 in which he said if “turmoil” occurs in Hong Kong, “the central government must intervene”.

No specific mention, however, was made of deploying the People’s Liberation Army (PLA), which has a garrison in Hong Kong, to quell the unrest, with Zhang cited as saying Beijing remained confident in the Hong Kong government and local police.

In China’s sharpest rebuke yet of the protesters, the government warned them on Tuesday not to “play with fire” and called on Hong Kong citizens to protect their homeland.

The Global Times, a Chinese tabloid published by the Communist Party’s People’s Daily, showed a video on its official Twitter feed of of police officers taking part in an anti-riot training drill in Shenzhen, which borders Hong Kong.

The protests have drawn millions onto the streets in opposition to an extradition bill that would see suspects tried in mainland courts controlled by the Communist Party. Many feared it would undermine Hong Kong’s independent judiciary and was another step towards full mainland control of Hong Kong.

Several thousand Hong Kong lawyers dressed in black, marched in silence on Wednesday to call on the government to safeguard the independence of the city’s department of justice.

The city’s lawyers fear the justice department’s prosecutions of arrested protesters are taking on an increasingly political slant with over 500 arrests. A female lawyer who declined to be named said she was marching “to make sure the government knows that within the legal sector”.