University committing $100 million for an endowed 'Legacy of Slavery Fund' 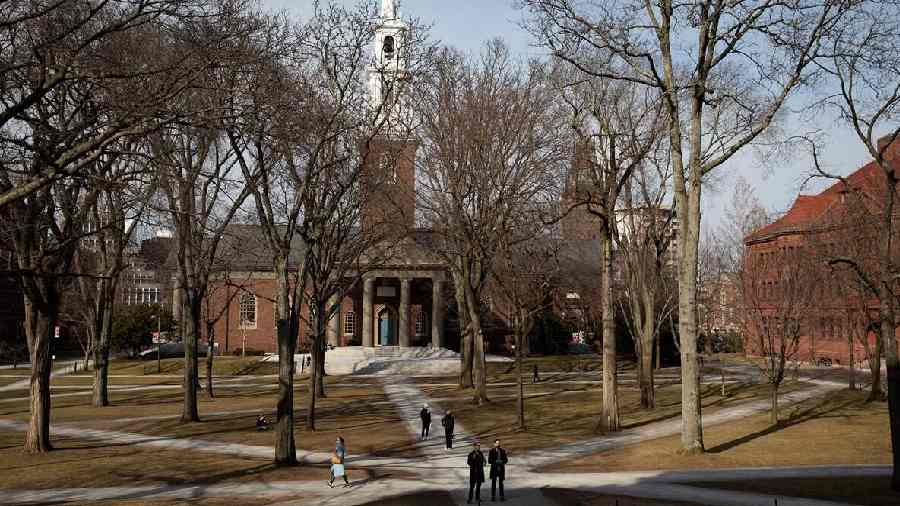 Experts said the amount of money Harvard was committing for such a project was rare, if not unprecedented for an educational institution.
NYTNS
Anemona Hartocollis   |   Published 28.04.22, 02:25 AM

In one column are the names of more than 70 enslaved people at Harvard: Venus, Juba, Cesar, Cicely. They are only first names, or sometimes no name at all — “the Moor” or “a little boy” — of people and stories that have been all but forgotten.

In another column are the names of the ministers and presidents and donors of Harvard who enslaved them in the 17th and 18th centuries: Increase Mather, governor John Winthrop, William Brattle. These full names are so powerful and revered they still adorn buildings today.

The contrasting lists are arguably the most poignant part of a 134-page report on Harvard University’s four centuries of ties to slavery and its legacy.

And they are just an appendix.

The report by a committee of Harvard faculty members, released on Tuesday, is Harvard’s effort to begin redressing the wrongs of the past, as some other universities have been doing for decades.

As part of the process, the university’s governing corporation has pledged $100 million in part to create an endowed “Legacy of Slavery Fund” that would allow scholars and students to bring Harvard’s connections to slavery into the light for generations to come.

Experts said the amount of money Harvard was committing for such a project was rare, if not unprecedented for an educational institution. It rivals the $100 million pledged by leaders of the Jesuit conference of priests for racial reconciliation and to benefit descendants of enslaved people at Georgetown University.

The report calls for spending the money in a multitude of tracks: By tracing the modern-day descendants of enslaved people at Harvard. By building memorials and curriculum to honour and expose the past. By creating exchange programmes between students and faculty members at Harvard and those at historically black colleges and universities, and by collaborating with tribal colleges. And by forging partnerships to improve schools in the American south and the West Indies, where plantation owners and Boston Brahmins made their intertwined fortunes on the backs of the enslaved.

The recommendations are somewhat vague, purposely so, Harvard officials said, so that more care can be put into fulfilling them. Some descendants of the enslaved said talks had already begun to figure out how they could work together.

But the report carefully avoided treading on direct financial reparations for the descendants of enslaved people.

Reparations “means different things to different people, so fixating on that term, I think, can be counterproductive”, Tomiko Brown-Nagin, the committee chair, a professor of both law and history, and dean of the Harvard Radcliffe Institute, said in an interview.

She said one goal of the new endowed fund was to drive social mobility by closing gaps in educational opportunity. “The university is committed to deeply meaningful and sustained remedies that will endure in perpetuity,” she said. “Those remedies are focused on leveraging our expertise in education, which is consistent with our mission.”

Some descendants of the enslaved at Harvard, like Jordan Lloyd, found the university’s promises bittersweet.

Lloyd grew up in Boston wondering how her black family had got there. While working as an actress, she paid her bills by waitressing at Harvard’s repertory theatre, never suspecting that she was walking the same streets as an ancestor she did not know about, Cuba Vassall.

Harvard’s report says Cuba Vassall was enslaved by Penelope Royall Vassall, sister of Isaac Royall Jr, the slaveholding benefactor of Harvard Law School. The Royall family crest, with its sheaves of wheat, was a symbol of the law school until it was withdrawn in 2016, after 80 years, because of student protests. The student paper, The Harvard Crimson, now practically makes a game of finding the Royall crest extant on some university property.

Lloyd, who now lives in Los Angeles and works in film, learned about her ancestor from Carissa Chen, then an undergraduate researching descendants of the enslaved under the tutelage of a Harvard history professor, Sven Beckert. Beckert, in turn, had been inspired by an investigation of slavery at Brown University that was started in 2003 by Ruth Simmons, the first black president of an Ivy League school.