Sites of UK govt, NYT, Amazon, CNN were briefly inaccessible for some users 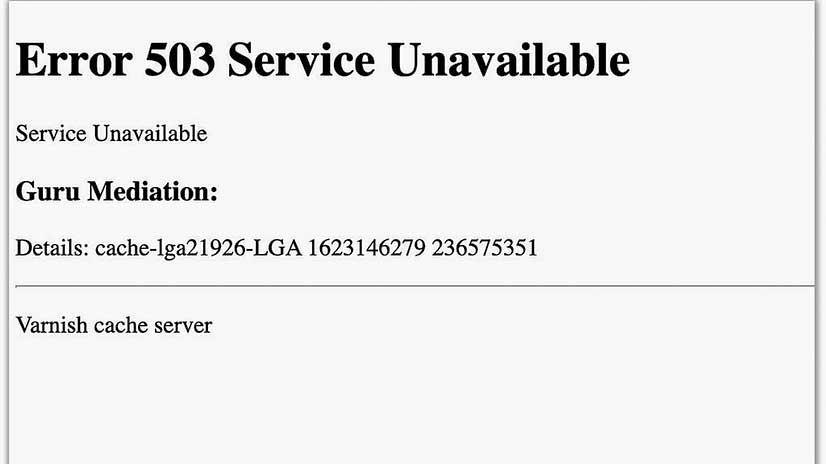 Thousands of government, news and social media websites across the globe were coming back online on Tuesday after being hit by a widespread hour-long outage linked to US-based cloud company Fastly Inc.

High traffic sites including Reddit, Amazon, CNN, Paypal, Spotify, Al Jazeera Media Network and the The New York Times were out of commission, according to outage tracking website Downdetector.com. They came back up after outages that ranged from a few minutes to an hour.

Fastly, one of the world’s most widely-used cloud-based content delivery network providers, said it reported a disruption from a “service configuration” and did not explain.

“Incidents like this underline the fragility of the Internet and its independence on a patchwork of fragmented technology. Ironically, this also underlines its inherent strength and how quickly it can recover,” Ben Wood, chief analyst at CCS Insight said.

“The fact that an outage like this can grab headlines around the world shows how rare it is.”

Fastly, which went public in 2019 and has a market capitalisation of more than $5 billion, is far smaller than peers like Amazon’s AWS.

The UK’s attorney-general earlier tweeted that the country’s main gov.uk website was down, providing an email for queries.

The disruption may have caused issues for citizens booking Covid-19 vaccinations or reporting test results, the Financial Times reported.

Fastly’s website said that most of its coverage areas had faced “Degraded Performance”. Error messages on several of the websites pointed to Fastly problems.

News publishers came up with inventive workarounds to report about the outage when their websites failed to load up.

Popular tech website the Verge used Google Docs to report news, while UK Technology Editor at the Guardian started a Twitter thread to report on the problems.

At the onset of the outage, nearly 21,000 Reddit users reported issues with the social media platform, while more than 2,000 users reported problems with Amazon, according to Downdetector.com.

Twitter users quickly jumped on the news, creating the #InternetShutdown hashtag with KITKAT’s official handle telling its 441,500 followers, “Guess it's time to Have A Break”.

“We were offline for a few minutes because the whole internet broke down,” tweeted Jitse Groen, chief executive of food delivery group Just Eat Takeaway.com.

For a company pitching itself as helping improve the reliability and speed of websites, it is hard to imagine a worse turn of events than what Fastly experienced on Tuesday.

Fastly, based in San Francisco, provides the kind of behind-the-scenes technology that most people do not know exists, but is crucial for making the Internet work.

The company had been enjoying some success. Its stock skyrocketed last year, benefiting from all the people who were online amid the pandemic, the same wave that helped other tech companies like Zoom before coming back down over the past several months. Before the system crashed, the stock had more than doubled since the company went public in 2019.

Fastly provides a technology known as a Content Delivery Network, or CDN, a highly distributed network used to reduce the distance between a server and a user, thus accelerating website loading speeds.