From home, a breakthrough 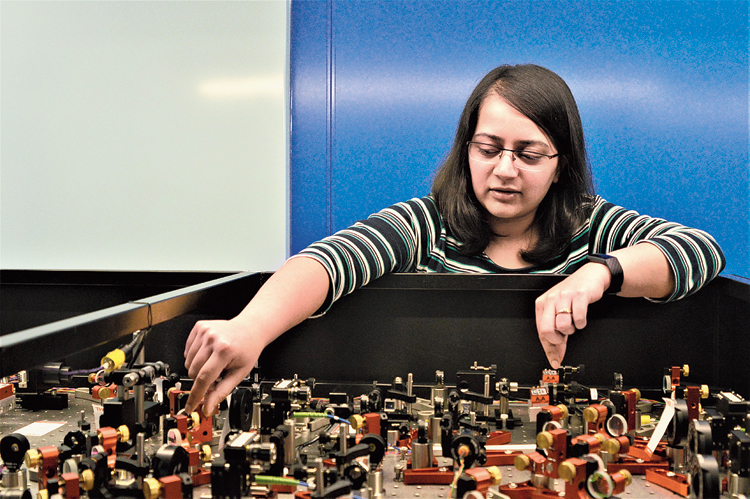 Amruta Gadge, an Indian physicist working in the UK, has made a major breakthrough by successfully creating a Bose-Einstein Condensate (BEC), also known as the “fifth state of matter”, from her living room two miles from her laboratory, Sussex University has announced.

Amruta, who is originally from Mumbai and is married to Calcutta boy Anjan Roy, a theoretical physicist — “we met at the Raman Research Institute in Bangalore” — explained that the Bose-Einstein Condensate is an outcome of the exchanges between Satyendranath Bose and Albert Einstein in 1924-25 and conceived a state of matter quite different from the four better known ones: solid, liquid, gas and plasma.

That she had been able to create BEC “remotely” from her living room — a fortuitous outcome of being in lockdown — has far-reaching ramifications, she said.

“You can apply quantum technology in areas that are difficult to get to,” said Amruta, who is a research fellow in Quantum Physics and Technologies.

According to Sussex University, “the achievement could provide a blueprint for operating quantum technology in inaccessible environments such as space”.

“A BEC consists of a cloud of hundreds of thousands of rubidium atoms cooled down to nanokelvin temperatures which is more than a billion times colder than freezing,” it said.

The research team are developing their sensors to be applied in many areas including electrical vehicle batteries, touch screens, solar cells and medical advancements such as brain imaging, the university added.

Peter Krüger, professor of experimental physics at the University of Sussex, said: “We believe this may be the first time that someone has established a BEC remotely in a lab that didn’t have one before. We are all extremely excited that we can continue to conduct our experiments remotely during lockdown, and any possible future lockdowns…..

“Enhancing the capabilities of remote lab control is relevant for research applications aimed at operating quantum technology in inaccessible environments such as space, underground, in a submarine, or in extreme climates.

“There are many applications for that, often in hard or impossible to access locations. This could be seismic tests underground, gravitational shifts in glaciers due to climate change or in extra-terrestrial studies of dark matter, to give just a few examples.”

Amruta first attended St Xavier’s College in Mumbai and then did her masters at the University of Pune. She also worked at the Tata Institute of Fundamental Research in Mumbai before going to Bangalore. “I went to the University of Nottingham for my PhD and the whole lab moved to University of Sussex a couple of years ago.”

Explaining the background to the breakthrough and its significance, Amruta said: “The Bose Einstein Condensate is a unique phase of matter. This is not a new topic — this goes way back to when Satyendranath Bose wrote to Einstein about this idea he had in the 1920s and then Einstein developed it further.”

Asked what was new about the breakthrough, she said: “The Bose Einstein Condensate has been achieved in the lab in 1995 in the US. And there has been a Nobel Prize (for that work). So, BEC is not new, but you have to understand the effort that is required to achieve this Condensate given that the theory was developed in 1920s and the first time they were able to achieve it in the lab was in 1995…. But now what’s new is that we are able to do it remotely.”