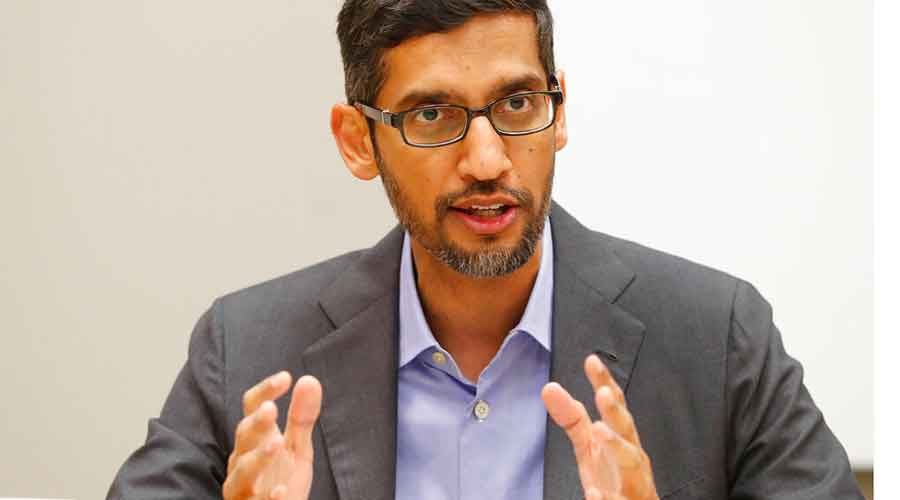 The Google chief urged "countries with strong democratic traditions and values" to stand up against the potential fragmenting of the internet
File picture
Agencies   |   New Delhi   |   Published 12.07.21, 10:27 PM

The free and open internet is under attack in countries around the world, Google boss Sundar Pichai warned in an interview with BBC.

He says many countries are restricting the flow of information, and the model is often taken for granted. Pichai also addresses controversies around tax, privacy and data and argues that artificial intelligence is more profound than fire, electricity or the internet.

"... it is more a step back... I think a free and open internet is a tremendous force for good and we take it for granted a bit...," he said in response to a question about "different internets" - a reference to countries having increasingly disparate laws about online content and what kind is "offensive".

"In each country now there is a debate what speech is OK and what should be allowed... in some ways I think we pull back from the bigger picture (which is that) many countries around the world are restricting the flow of information and drawing much more rigid boundaries," he said.

The Google chief urged "countries with strong democratic traditions and values" to stand up against the potential fragmenting of the internet.

The government insists the laws will "empower and protect users...".

Critics say the rules violate users' right to privacy and freedom of expression.

Facebook-owned WhatsApp - whose service is used by over 50 crore Indians - has mounted a legal challenge over being forced to dismantle its end-to-end encryption.

Similarly, news broadcasters in India have red-flagged rules they say give authorities "excessive powers to unreasonably and impermissibly restrict (media's) freedom of speech and expression".

They have said the rules'' 'Code of Ethics' contained "vague, imprecise and ambiguous terms in relation to 'content' such as 'good taste', and 'snobbish attitude'", and that these are not in line with the Supreme Court ruling that struck down Section 66A of the IT Act.

Twitter has frequently been in the headlines on this issue, with delays over compliance and removal of "offensive" content angering the government; last week it was told the "law of the land is supreme".

Last month United Nations special rapporteurs also expressed concern; they said the rules did not conform with international human rights norms and were worried it could curb free speech. The government dismissed these concerns, insisting India had strong democratic roots.

In May, Mr Pichai told reporters from the Asia Pacific region "Google is committed to complying with local laws and engages constructively with governments". However, he added: "... we are very clear about the values of a free and open internet and the benefits it brings and we advocate for it...".

Mr Pichai said that while his company respected the legislative processes in different countries, in cases where it needed to push back, it would do so.

"It's a balance we have struck around the world," he said.