A member of a prominent Afrikaner family, he had vehemently defended the separation of the races during his long climb up the political ladder 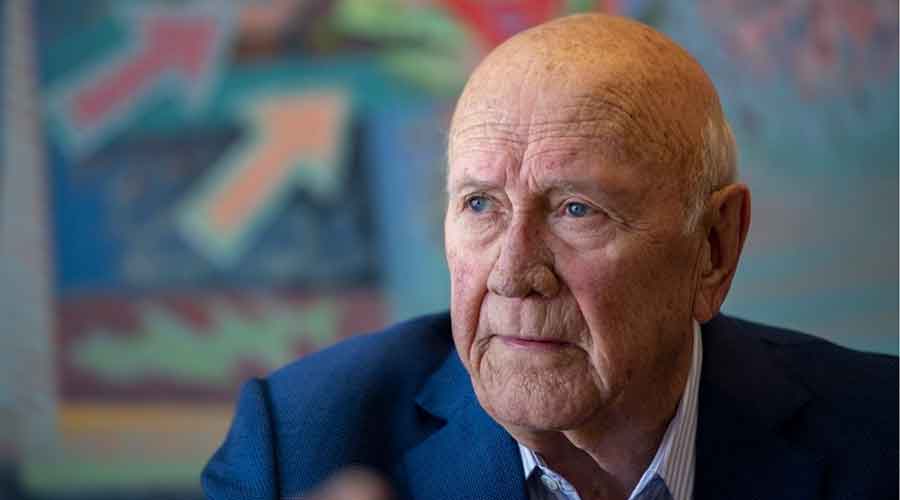 F.W. de Klerk, who as President of South Africa dismantled the apartheid system that he and his ancestors had helped put in place, died at his home near Cape Town on Thursday. He was 85.

The former President’s death was confirmed by the F.W. de Klerk Foundation, which said in a statement that he had been receiving treatment for cancer.

A member of a prominent Afrikaner family, De Klerk had vehemently defended the separation of the races during his long climb up the political ladder.

But once he took over as President in 1989, he stunned his deeply divided nation, and the wider world, by reconsidering South Africa’s racist ways, a step that led to him and Nelson Mandela, whom he released from prison, being awarded the Nobel Peace Prize.

South Africa had become such a pariah in the eyes of the world by the 1980s, its internal strife and tainted reputation so disruptive to the economy, that De Klerk argued that the country’s future depended on a new course.

“He didn’t say apartheid was bad or immoral but that he had decided it wasn’t going to work,” said Herman J. Cohen, who held talks with de Klerk during that tumultuous time as the top Africa adviser in the administration of President George H.W. Bush.

With its web of insidious laws doling out rights, privileges and even meal sizes in prisons based on skin colour, apartheid was not easy to undo, requiring years of legislative action and significant national angst. But when De Klerk in 1990 announced the lifting of the 30-year ban on the African National Congress and the release from prison of its most prominent leader,  Mandela, he set in motion a transformation so powerful that it quickly pushed him to the margins.

Mandela would trample De Klerk in presidential elections just four years after winning his freedom. Even as Mandela invited De Klerk into his transitional government as second deputy President, De Klerk struggled with his diminished role and eventually quit.

Frustrated by party tensions and criticism from the country’s Truth and Reconciliation Commission, which investigated the country’s past, De Klerk announced his retirement from politics in 1997.

De Klerk apologised for the crimes committed to people of colour in a video released by his foundation on its website hours after his death. “I, without qualification, apologise for the pain and the hurt and the indignity and the damage that apartheid has done to Black, Brown and Indians in South Africa,” de Klerk said.