The decision comes in the wake of Russia's invasion of Ukraine 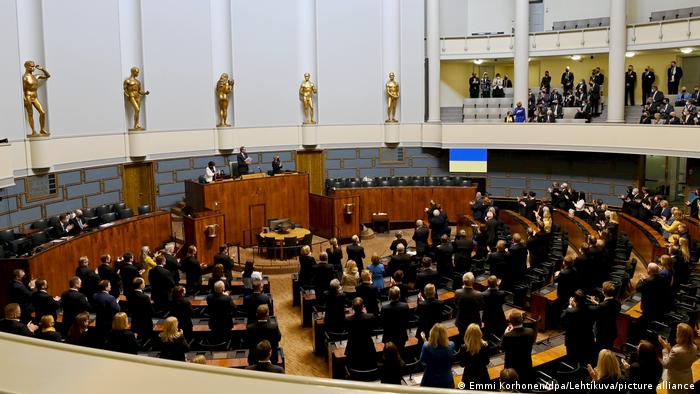 The majority party in the Finnish parliament has come out in support of joining NATO.
Deutsche Welle
Deutsche Welle   |   Published 14.05.22, 09:52 PM

The decision to join the defense alliance was endorsed by Finnish President Sauli Niinisto and Prime Minister Sanna Marin earlier this week.

Finland's ruling Social Democrats backed a proposal on Saturday to apply for NATO membership, according to a statement on the party's website. The decision comes in the wake of Russia's invasion of Ukraine.

The party followed in the footsteps of Prime Minister Sanna Marin, who released a joint statement with President Sauli Niinisto on Thursday saying Finland must join the alliance "without delay."

The officials of the Finnish Social Democrats, historically wary of NATO, voted with 53 votes in favor of joining the alliance, with only 5 against. With the majority of Parliament backing membership, an official application is expected within days.

Marin repeated her support for joining NATO in a speech to the party council on Saturday. She made clear that Russia's invasion of Ukraine was the turning point in Finland's trajectory.

"The conversation was direct and straightforward, and it was conducted without aggravations. Avoiding tensions was considered important," Niinisto said after the call.

Russia's invasion of Ukraine has pushed public support in the Nordic nation for joining NATO from about 25% to around 75%. Sweden is also considering joining the alliance after a long-held position of neutrality.

The Kremlin's response to the Finnish president was that any move to abandon Finland's historically neutral stance would be a mistake. Putin said Russia posed no threat to Finland, but that membership in NATO could negatively affect the countries' relations.

The Kremlin cut off Russian electricity supplies to Finland on Friday night after the firm supplying the electricity, RAO Nordic, complained of payment arrears.

Russia provided about 10% of Finland's electricity, but this has largely been covered by imports from Sweden. The official Finnish bid to join NATO is expected to be made soon. NATO chief Jens Stoltenberg has previously said both Finland and Sweden would be welcomed into the alliance "with open arms."