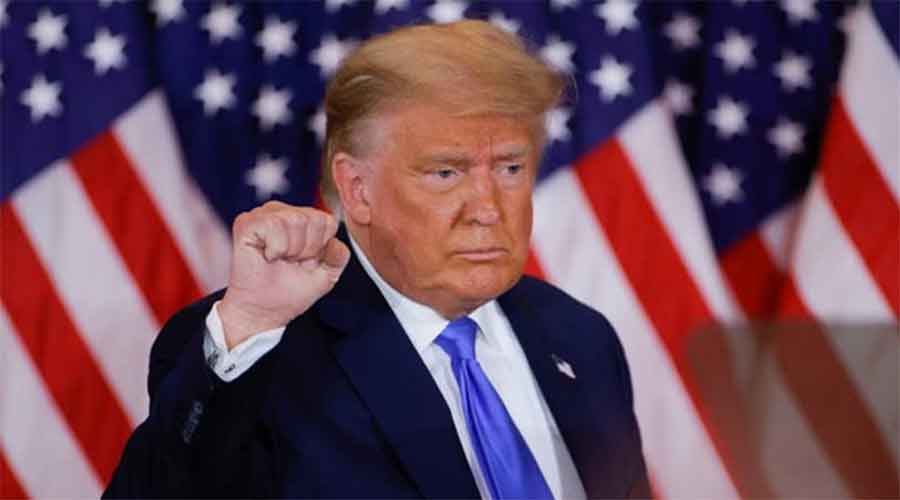 President Trump’s government on Monday authorised President-elect Joseph R. Biden Jr to begin a formal transition process after Michigan certified Biden as its winner, a strong sign that the President’s last-ditch bid to overturn the results of the election was coming to an end.

Trump did not concede, and vowed to persist with efforts to change the vote, which have so far proved fruitless. But the President said on Twitter on Monday night that he accepted the decision by Emily W. Murphy, the administrator of the General Services Administration, to allow a transition to proceed.

In his tweet, Trump said that he had told his officials to begin “initial protocols” involving the handoff to Biden “in the best interest of our country,” even though he had spent weeks of trying to subvert a free and fair election with false claims of fraud.

Hours later, he tried to play down the significance of Murphy’s action, tweeting that it was simply “preliminarily work with the Dems” that would not stop efforts to change the election results.

Still, Murphy’s designation of Biden as the apparent victor provides the incoming administration with federal funds and resources and clears the way for the President-elect’s advisers to coordinate with Trump officials.

The decision from Murphy came after several additional senior Republican lawmakers, as well as leading figures from business and world affairs, denounced the delay in allowing the peaceful transfer of power to begin, a holdup that Biden and his top aides said was threatening national security and the ability of the incoming administration to effectively plan for combating the coronavirus pandemic.

And it followed a key court decision in Pennsylvania, where the state’s Supreme Court on Monday ruled against the Trump campaign and the President’s Republican allies, stating that roughly 8,000 ballots with signature or date irregularities must be counted.

In Michigan, the statewide canvassing board, with two Republicans and two Democrats, voted 3 to 0 to approve the results, with one Republican abstaining. It officially delivered to Biden a key battleground that Trump had wrested away from Democrats four years ago, and rebuffed the President’s legal and political efforts to overturn the results.

By Monday evening, as Biden moved ahead with plans to fill out his cabinet, broad sectors of the nation had delivered a blunt message to a defeated President: His campaign to stay in the White House and subvert the election, unrealistic from the start, was nearing the end.

Murphy said she made her decision on Monday because of “recent developments involving legal challenges and certifications of election results”, most likely referring to the certification of votes by election officials in Michigan and a nearly unbroken string of court decisions that have rejected Trump’s challenges in several states.

In a statement, Yohannes Abraham, the executive director of Biden’s transition, said that Murphy’s decision was “a needed step to begin tackling the challenges facing our nation”.

He added that aides to Biden would soon begin meeting with Trump administration officials “to discuss the pandemic response, have a full accounting of our national security interests, and gain complete understanding of the Trump administration’s efforts to hollow out government agencies”.

Trump had been resisting any move towards a transition. But in conversations in recent days that intensified on Monday morning, top aides — including Mark Meadows, the White House chief of staff; Pat A. Cipollone, the White House counsel; and Jay Sekulow, the President’s personal lawyer — told the President the transition needed to begin. He did not need to say the word “concede”, they told him, according to multiple people briefed on the discussions.