No face cover for Trump 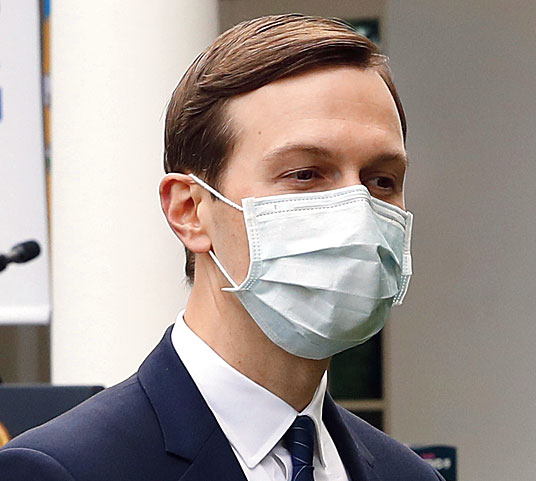 The White House on Monday ordered all West Wing employees to wear masks at work unless they are sitting at their desks, an abrupt shift in policy after two aides working near the President — a military valet and Katie Miller, the vice-president’s spokeswoman — tested positive for the coronavirus last week.

In an internal email obtained by The New York Times, people who work in the cramped quarters around the Oval Office were told that “as an additional layer of protection, we are requiring everyone who enters the West Wing to wear a mask or face covering.”

Asked at a Rose Garden news conference whether he had ordered the change, Trump — who did not wear a mask and has repeatedly said he sees no reason to — said, “Yeah, I did.” But officials said the new requirement was not expected to apply to Trump or to Vice-President Mike Pence.

White House officials have scrambled since last week’s positive diagnoses to keep the virus from spreading throughout 1600 Pennsylvania Avenue even as the President, Pence and many other senior administration advisers who may have come into contact with Miller and the valet declined to self-quarantine. Trump said on Monday that he and Pence had tested negative for the virus.

Three top public health officials have chosen to remain isolated for a period of time — Dr Robert R. Redfield, the director of the Centers for Disease Control and Prevention; Dr Stephen Hahn, the commissioner of the Food and Drug Administration; and Dr Anthony S. Fauci, the director of the National Institute of Allergy and Infectious Diseases.

During Trump’s afternoon news conference, senior White House aides could be seen standing along the side of the Rose Garden — all of them wearing masks.

The White House also made some smaller changes, including displaying signs encouraging social distancing at entryways and asking aides during routine temperature checks if they are experiencing symptoms, according to officials. Monday’s email said that West Wing staff members were “not required to wear a facial covering while at their desk if they are appropriately socially distanced from their colleagues”.

Many of the President’s top aides and advisers have eschewed masks in their appearances with Trump, despite their own advice to their staffs to wear them.

On Saturday, the defence secretary, Mark T. Esper, and the top military chiefs sat barefaced around the table with Trump at the White House, apparently in contradiction of policy at the Pentagon, where officials have been social distancing for two months.

Esper had made a point of extolling the virtues of wearing masks while indoors during a visit to US Northern Command in Colorado earlier in the week, saying that “in the open air, it’s not as essential”, but adding that “in a room, we’re wearing masks”.

The new White House policy on masks came as Trump tried to reinvent his government’s troubled history on testing for the coronavirus, claiming that the US was “unmatched and unrivalled” in its testing capacity but ignoring the early failures to provide testing that allowed the virus to spread invisibly for months.

Declaring once again that “if somebody wants to be tested right now, they’ll be able to be tested”, Trump said that his administration was working with states to allow them to conduct 12.9 million tests in May, insisting that the testing ability in the US compares favourably with other countries.

“We are testing more people per capita than South Korea, the UK, France, Japan, Sweden, Finland and many other countries,” he said, ignoring countries where testing on a per capita basis is higher, including Germany, Russia, Spain, Canada, Switzerland and 20 others. New York Times News Service