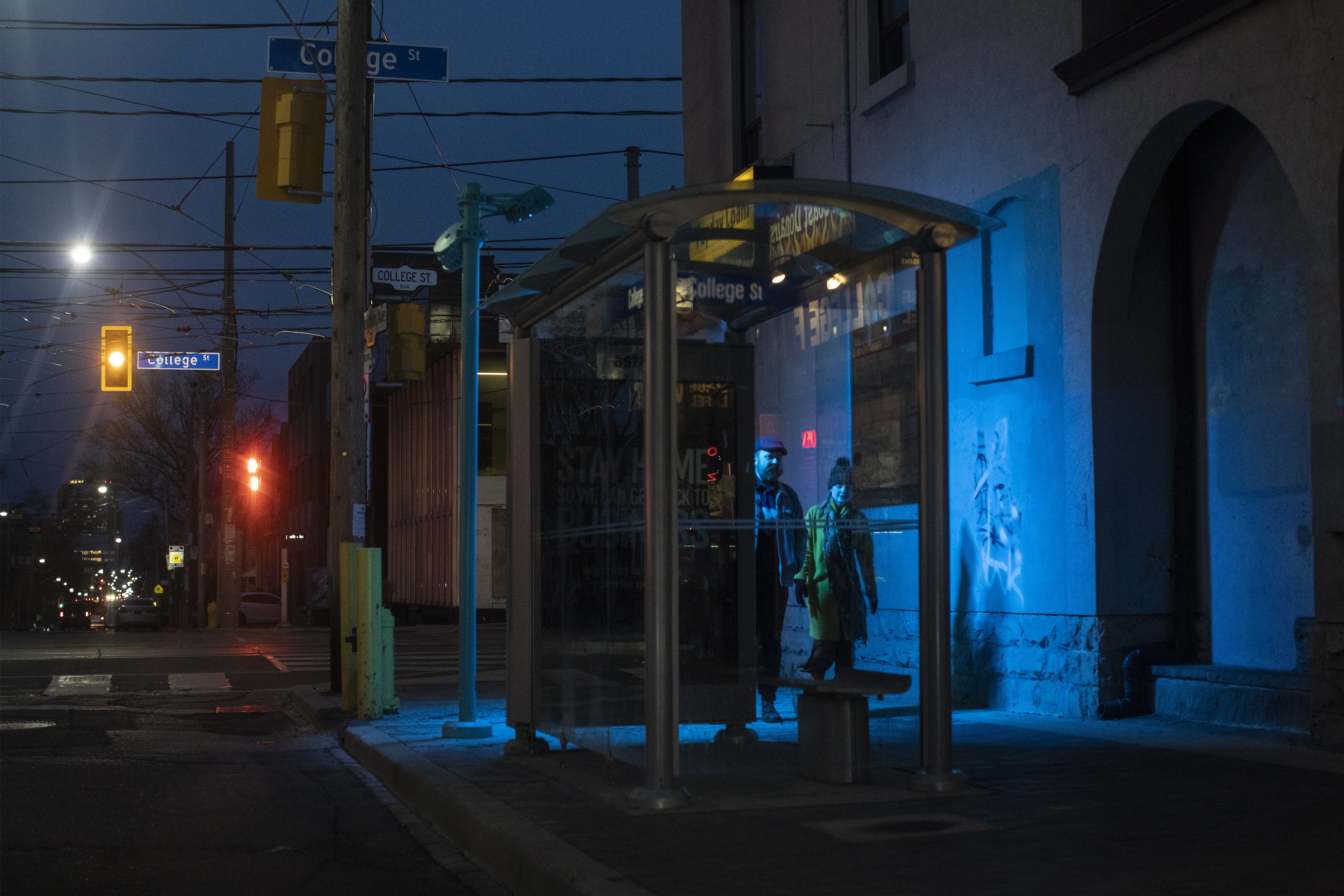 A crowd of people bunched shoulder to shoulder one recent spring day on a boardwalk overlooking Lake Ontario. They leaned over a waist-high fence, taking pictures with their phones.

Only one wore a mask.

Canada’s largest city has been under coronavirus lockdown since mid-March. Mayor John Tory was the first to go into self-isolation, and the rest of Toronto — a city known for adhering to the rules — soon followed.

So that scene at the boardwalk? We can explain.

There was a baby fox, you see, a whole family of foxes, in fact, newly taking up residence beneath the boardwalk.

For a few weeks starting in April, it seemed as if all anyone was talking about, other than the virus, were the foxes — mom, dad and four kits. Or was it five? No one was really sure.

There were reports of people picking up the kits and hand-feeding them. Paparazzi assembled at dusk and dawn, hunting for shots of the kits in the honey light beloved by both photographers and, it turns out, foxes. They made the national news.

At first, they were a welcome distraction. But they quickly became a full-on attraction.

“I watched a lady trying to take a selfie with the fox in the background,” said Erwin Buck, a retired advertising executive-turned-local-photographer who lives nearby. “People have been locked up for the last six to seven weeks and this is the first excitement they’ve seen. They go overboard.”

The poets and philosophisers of Toronto think there is more behind the city’s captivation with the fox family.

They are wild and free, when the rest of us feel trapped. They are new, beautiful life, while we are transfixed with death. And they offer hope that maybe we can make it through these hard times.

Foxes, after all, are highly adaptable, able to flourish in almost any environment. In literature, they are the classic tricksters, emerging unscathed from every deadly snare.

“They are full of courage, full of wit, full of resource and unremitting effort to survive,” said Al Moritz, Toronto’s poet laureate.

Still, for all their survival skills, these foxes had made their den under the busy boardwalk in the city’s Beach neighbourhood, just five miles from downtown. I live five blocks away. While I went there regularly before lockdown, now it is my one precious, daily escape.

So I was worried.

Would the city close down the area, as it had High Park across town during cherry blossom season, for fear too many adorers would infect one another? Would it move the fox family’s den to a less open place, where people wouldn’t congregate dangerously around them?

That’s not what happened.

“We want to protect these foxes,” said Mary Lou Leiher, a manager with the city’s animal services department. She noted that in Toronto, a provincial law ensures the protection of wild animals unless they are destroying private property, which these foxes are not.

City workers put up a bigger fence around the fox den. Then, they extended it all the way down to the water, so the foxes had their own private beach.

Soon after, volunteers with the Toronto Wildlife Center, a local charity that rehabilitates sick and injured wild animals, swooped in. They were concerned that the animals were becoming habituated to human contact, which could prove their undoing: If they scratch or otherwise injure a human, the city would euthanise them and test their brains for rabies, Leiher said.

So the volunteers replaced the fence along the boardwalk with an even taller one, and wrapped it in green cloth, and the foxes were spared not just reaching hands but prying eyes.

Giant signs were posted with a warning: “Smile, you’re on camera.”

The volunteers began staffing the site, for 16 hours a day, to shoo away both humans and any baby foxes that tried to approach human visitors.

It’s known as aversive conditioning, and the volunteers can only hope it works.

“They’ve been trained to go to people for food,” explained Nathalie Karvonen, the Wildlife Center’s executive director. “It’s questionable whether we can turn it around now.”

The city also beefed up its patrols in the area. Jogging by one day in early May, I counted five enforcement officers, tasked with ticketing people who gathered too close together in parks.

One officer was yelling at a lone pedestrian for stopping and trying to look over the fence.

“Our chief concern is for the animals’ welfare,” said Brad Ross, the City Hall spokesman.

As a rule, Canadians have deep respect and fear of wild animals, grown from living in a country of vast forests and few people.

The country’s literature is filled with stories of wolves and bears; Canadian coins are stamped with caribou and beaver.

Still, in the midst of pandemic, Toronto seems open to making an exception for foxes.

“The fox is a little flash of beauty and resourcefulness,” said Moritz, the poet laureate. “It manages to live in alleyways and backyards. It’s a fugitive and it’s lovely.”

It is also a little more discreet than some of its fellow urban wildlife.

“Foxes are typically more shy and not as obvious,” said Burton Lim, assistant curator of mammalogy at the Royal Ontario Museum, and one of the authors of Toronto’s guide to local mammals.