The breakout garment of quarantine season 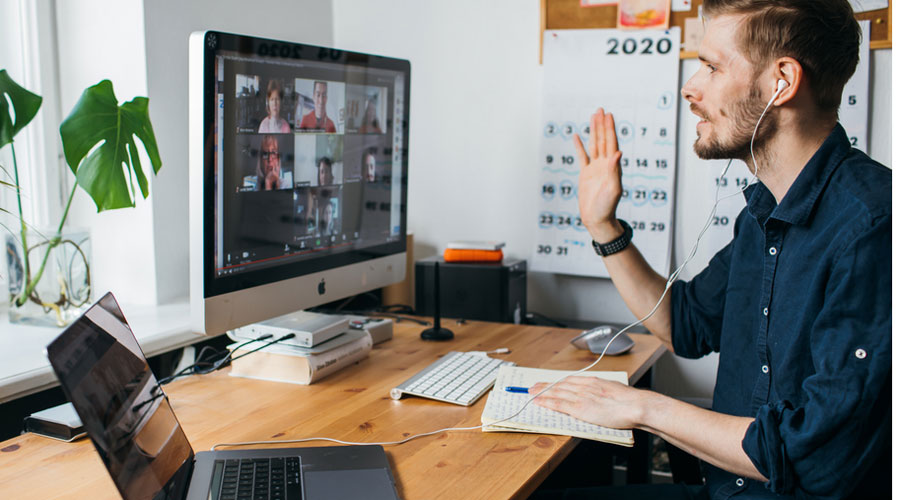 It’s time to log in to his first Zoom meeting of his workday, so Joe Farrell puts on a short-sleeve button-down from Brooks Brothers, in black, red and white plaid.

He has worn it for video calls on 70 consecutive days. This was not his plan. “My ego thought someone would notice,” said Farrell, the executive vice-president of the comedy empire Funny or Die.

No one did. Not one of the half-dozen co-workers he sees every day via screen said anything. Neither did the 50-odd entertainment industry executives he Zooms with week after week. This is a man who once owned 210 shirts because, as the host of a design show on TLC, he couldn’t have viewers see him repeat.

Finally, the terrible secret of this single garment became too much for Farrell to bear. He began confiding in colleagues about his Zoom shirt.

“Every time I’ve outed myself, they say, ‘Oh, yeah,’ and they pull up two shirts hanging on the back of their chair,” he said.

If you ask, people who have managed to stay employed during the pandemic will confess to owning a Zoom shirt: a top, typically kept on the back of the computer chair or a hanger nearby, that they pop on in the moments before their webcam lights up. Like the pre-knotted tie Lyndon Johnson kept ready to put around his neck, a Zoom shirt instantly spiffs you up for a last-minute work meeting.

Maria Rugolo, an apparel industry analyst for the NPD Group, said her company had run a poll showing that only 10 per cent of people get dressed for working at home at the start of the day and change into “comfortable clothes” later. Some vast portion of the rest of us, I have come to understand, just slip into and then out of our Zoom shirts.

There are several ways to Zoom Shirt. Some people, like Farrell, go to a one-garment extreme. Others rotate at least a couple shirts, or stratify them by degree of formality, depending on the Zoom situation. Some take their Zoom shirt on and off for every meeting, while others wear theirs all day.

My book editor, Gretchen Young, a vice-president at Hachette Book Group, has exactly three Zoom Shirts: a button-down Hollister, a turtleneck and a James Perse sky blue V-neck T-shirt that she wears under a Free People jacket.

“Initially I would look in my closet for them,” Young said. “Then I said, ‘I’m hanging them on my bedroom door.’ Then I just had them sitting on a chair in my dining room where I set up my desk.”

Choosing a Zoom shirt isn’t simple. Ironically, a garment that rarely leaves a single room needs the same qualities as a travel shirt: durable, easy to store, able to front in a variety of social settings. It also must come on and off in a flash. The Platonic ideal of the Zoom shirt stays mostly buttoned all the time, with just enough of them undone to get the thing over your head.

When my J. Crew button-downs started to look wrinkled after a few uses, I settled on a cheap, casual, basic H&M number that was made to maintain its cheap, casual, basic look. But I’m considering upgrading to one recommended by Daniel Zisman, the public relations manager at the men’s wear start-up Proper Cloth. It’s a $175 merino wool dress shirt that he promised would “hold its shape” even after being thrown on the sofa near my laptop.

I was particularly sold after I asked him the most important question about any Zoom Shirt.

“You can wash it maybe every week or two, honestly,” he said.

Zoom shirts are really the first and last word in Zoomwear. Zoom jackets, I quickly discovered from looking around large Zoom calls in the early pandemic weeks, are vestimenta non grata. Zoom Ties look even more ridiculous. Everyone knows you have your laptop set up on the dining room table, with dishes just out of sight.

“When people overly dress up, I find it a little pretentious,” said Kevin Murray, a member of the Federal Home Loan Bank of San Francisco’s board and chief executive of the Weingart Center Association, which serves the homeless. Murray has been dressing less formally for Zoom calls, partly because they’re Zoom calls and partly because he has bigger things to worry about right now.

But while it can’t be too formal, a Zoom shirt can be accessorised. “Wear statement earrings,” suggested Sarah LaFleur, the chief executive and founder of MM.LaFleur, a maker of stylish office wear for women. As for the shirt itself, she advises pastels to brighten your face.

“I have four colours in our Chadwick sweater, and I often throw them on five minutes before a Zoom call,” she wrote in an email.

“They’re stretchy, wrinkle resistant and also machine washable. I literally keep them stacked next to my laptop.”

The Zoom shirt market is competitive. LaFleur has promoted the idea of “mullet dressing” — business on top, party on the bottom.

Email inboxes are stuffed with ads. Urban Outfitters: “Shirts, blouses and camis to keep you video-call ready.” Brooks Brothers: “What We’re Wearing: Our Video Conference Edit.” Neiman Marcus: “Picks for when you’re only in the mood for dressing up from the waist up.”

Walmart sold more tops than bottoms in the first quarter of the year. Google Trends shows that “shirts” is at a 12-month high as a search term. While Google Trends records erratic data for the term “Zoom Shirts”, that’s most likely because I only just made it up for this article.

“In the real world, you can wear something a little bit plungy, because they’re presented with the whole thing, from the top to the feet,” she said. “On Zoom, all people are going to see is your breasts. And you don’t want that. Unless you’re doing an OnlyFans thing.”

For last-minute Zooms at her Los Angeles home, Grayson covers up with a Louis Vuitton pink scarf near her laptop. “I know in 15 minutes I’ll be back to my glass of rosé,” she said, “so I’ll put this on and have my Jackie O. moment.”

Sterling McDavid, a former Goldman Sachs analyst who co-founded the fashion line Burnett New York, suggests for a Zoom shirt a flowy top with a pattern that shows some movement. Her $1,500 floral ruffle blouse is her biggest seller. In fact, it’s basically her only seller, besides masks.

“What you’re going to see from us in the fall is going to be primarily appropriate for Zoom,” McDavid said.

“You can go straight from Zoom call to socially distanced drinks outside with your friends. It’s the new desk-to-dinner.”