About 3,700 people have been confined aboard the ship 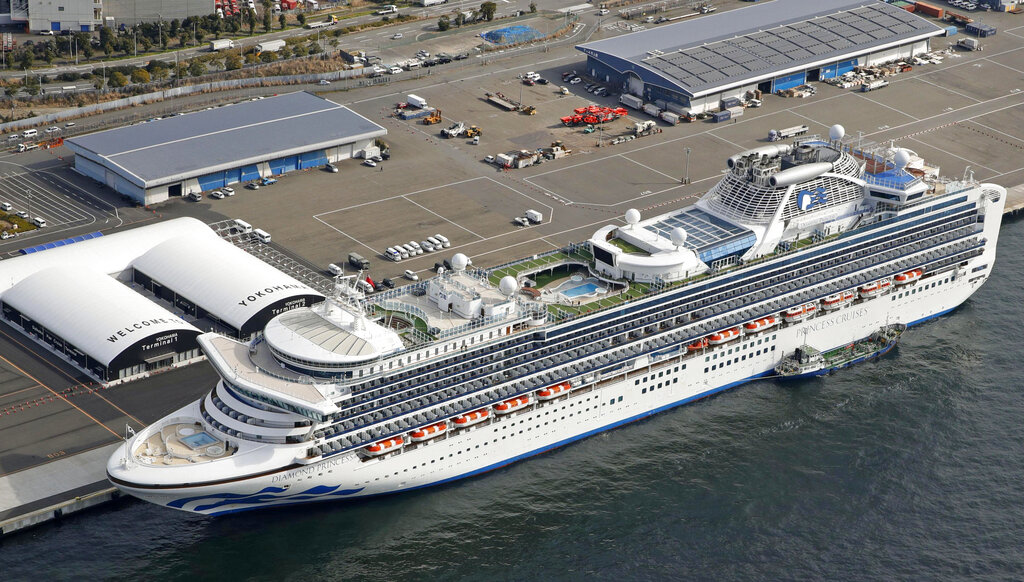 Japan on Friday reported 41 new cases of a virus on a quarantined cruise ship and turned away another luxury liner while the death toll in mainland China rose to 636, including a doctor who got in trouble with authorities in the communist country for sounding an early warning about the disease threat.

China's anti-graft watchdog on Friday launched a probe into the death of a whistle blower doctor who was reprimanded by police for spreading 'rumours' about the coronavirus outbreak in China that has claimed over 630 lives, amid an outpouring of global grief and anger over his demise.

Following an online uproar over the government's treatment of Dr. Li Wenliang, 34, the ruling Communist Party said it was sending an investigation team to 'fully investigate relevant issues raised by the public' regarding the case.

Two docked cruise ships with thousands of passengers and crew members remained under 14-day quarantines in Hong Kong and Japan.

Before Friday's 41 confirmed cases, 20 infected passengers were escorted off the Diamond Princess at Yokohama near Tokyo. About 3,700 people have been confined aboard the ship.

Prime Minister Shinzo Abe announced Thursday that Japan will deny entry of foreign passengers on another cruise ship — Holland America's cruise ship Westerdam, on its way to Okinawa from Hong Kong — because of suspected virus patients found on board. The Seattle-based operator denied anyone had virus.

The ship was currently near Ishigaki, one of Okinawa's outer islands, and was seeking another port, said Overseas Travel Agency official Mie Matsubara. Japanese media reported there were 2,257 people aboard.

'Everyone is starting to reject the ship and we are getting desperate,' she said. 'We hope we can go somewhere so that passengers can land.'

At least four other cruise ships, two foreign and two Japanese-operated, are headed to Japan by the end of the month, transport minister Kazuyoshi Akaba said, urging port authorities around the country to turn them away.

Dr. Li had worked at a hospital in the epicenter of the outbreak in the central city of Wuhan. He was one of eight medical professionals in Wuhan who tried to warn colleagues and others when the government did not, writing on his Twitter-like Weibo account that on December 3 he saw a test sample that indicated the presence of a coronavirus similar to SARS, which killed nearly 800 people in a 2002-2003 outbreak that the government initially tried to cover-up.

Li wrote that after he reported seven patients had contracted the virus, he was visited on January 3 by police, who forced him to sign a statement admitting to having spread falsehoods and warning him of punishment if he continued.

This image from video, shows a selfie of Dr. Li Wenliang. The Chinese doctor who got in trouble with authorities in the communist country for sounding an early warning about the coronavirus outbreak died Friday, February 7, 2020, after coming down with the illness.
AP

A copy of the statement signed by Li and posted online accused him of making 'false statements' and 'seriously disturbing social order.'

'This is a type of illegal behavior!' the statement said.

Li wrote that he developed a cough on January 10, fever on January 11 and was hospitalized on January 12, after which he began having trouble breathing.

He also wrote that he had not in fact had his medical license revoked, a reference to the sort of extrajudicial retaliation the communist authorities meet out to rights lawyers and others seen as troublemakers.

'Please rest easy, I will most certainly actively cooperate with the treatment and seek to obtain an early discharge!' Li wrote on January 31. He posted again on February 1, saying he had been confirmed as having the virus.

On Friday, the Global Times, a Communist Party newspaper and usual staunch defender of the authorities, reported that 'many said the experience of the eight 'whistleblowers' was evidence of local authorities' incompetence to tackle a contagious and deadly virus.'

It quoted Zeng Guang, chief epidemiologist at the Chinese Center for Disease Control and Prevention, as telling the paper's editor that 'we should highly praise the eight Wuhan residents.'

'They were wise before the outbreak,' Zeng was quoted as saying. The paper also cited online voices saying local authorities owe Li an apology. It quoted one posting as saying, 'We lost a hero.' 'If his warning could send an alarm, the outbreak might not have continued to worsen,' the posting said.

'Looking back, his professional sense of vigilance in particular is worthy of our respect,' the paper said in an editorial.

The police action against the eight whistleblowers also garnered a rare and extremely subtle rebuke from the nation's highest court. 'We have the responsibility to express to society our legal thoughts about solving the problem of rumors,' a posting on the court's Weibo account said.

Within a half-hour of announcing earlier Friday that Li was in critical condition, the hospital received nearly 500,000 comments on its social media post, many of them from people hoping Li would pull through. One wrote: 'We are not going to bed. We are here waiting for a miracle.'

Meanwhile, a newborn discovered infected 36 hours after birth has become the youngest known patient. The number of people infected globally has risen to more than 31,000. Precisely how the child became infected was unclear.

'The baby was immediately separated from the mother after the birth and has been under artificial feeding. There was no close contact with the parents, yet it was diagnosed with the disease,' Zeng Lingkong, director of neonatal diseases at Wuhan Children's Hospital, told Chinese TV.

Zeng said other infected mothers have given birth to babies who tested negative, so it is not yet known if the virus can be transmitted in the womb.

China's state media Friday that President Xi Jinping urged the US to 'respond reasonably' to the virus outbreak in a phone call with President Donald Trump.

'A people's war against the virus has been launched,' Xi was quoted as saying by broadcaster CCTV, using timeworn communist terminology. 'We hope the US side can assess the epidemic in a calm manner and adopt and adjust its response measures in a reasonable way.'

Beijing has complained that the US was flying its citizens out of Wuhan but not providing any assistance to China.

The White House said Trump 'expressed confidence in China's strength and resilience in confronting the challenge' of the outbreak.

Testing of a new antiviral drug was set to begin on a group of patients Thursday, the official Xinhua News Agency reported. The drug, Remdesivir, is made by US biotech company Gilead Sciences.