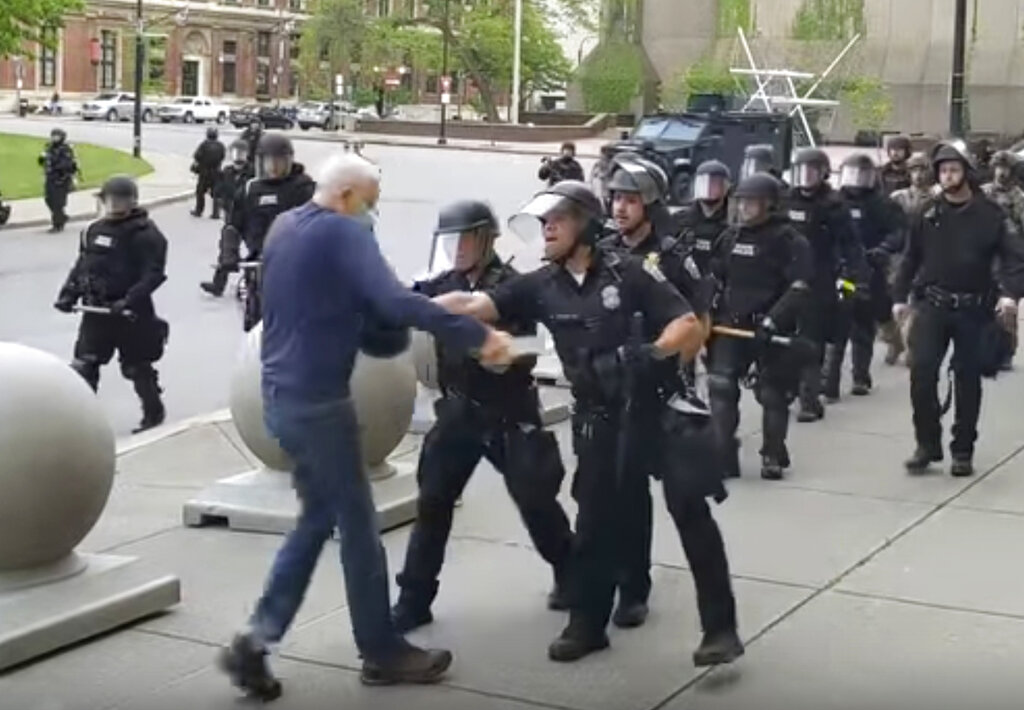 Two Buffalo police officers were suspended without pay on Thursday night after a video showed them shoving a 75-year-old protester, who was hospitalised with a head injury, the authorities said.

The video taken by WBFO, a local radio station, shows the man approaching a group of officers during a protest stemming from the death of George Floyd. After he stops in front of them to talk, an officer yells, “push him back” three times; one officer pushes his arm into the man’s chest, while another extends his baton towards him with both hands.

The man is seen flailing backward, landing just out of range of the camera, with blood immediately leaking from his right ear. The video shows an officer leaning down to examine him, but another officer then pulls the first officer away. Several other officers are seen walking by the man, motionless on the ground, without checking on him.

Mayor Byron Brown said on Thursday night that the man was in serious condition.

The video, which rapidly spread across social media, added to a growing body of videos from across the nation that showed officers responding to protests against police violence with more police violence. Fury among online supporters of the protests was heightened by the police department’s initial claim that the man “tripped and fell”, a description at direct odds with the video.

Governor Andrew M. Cuomo of New York condemned the actions of the officers in a statement late on Thursday night.

“The incident in Buffalo is wholly unjustified and utterly disgraceful,” Cuomo said. “I’ve spoken with City of Buffalo mayor Byron Brown and we agree that the officers involved should be immediately suspended. Police officers must enforce — NOT ABUSE — the law.”

“It sickens me,” the Erie County executive, Mark Poloncarz, wrote on Twitter about the video, which includes both vulgarity and disturbing images.

The Buffalo Police Department told local media that five people were arrested during the protest.

The mayor, Brown, said in a statement that he was disturbed by the episode and that the city’s police commissioner had ordered an immediate investigation.

“After days of peaceful protests and several meetings between myself, police leadership and members of the community, tonight’s event is disheartening,” he said.