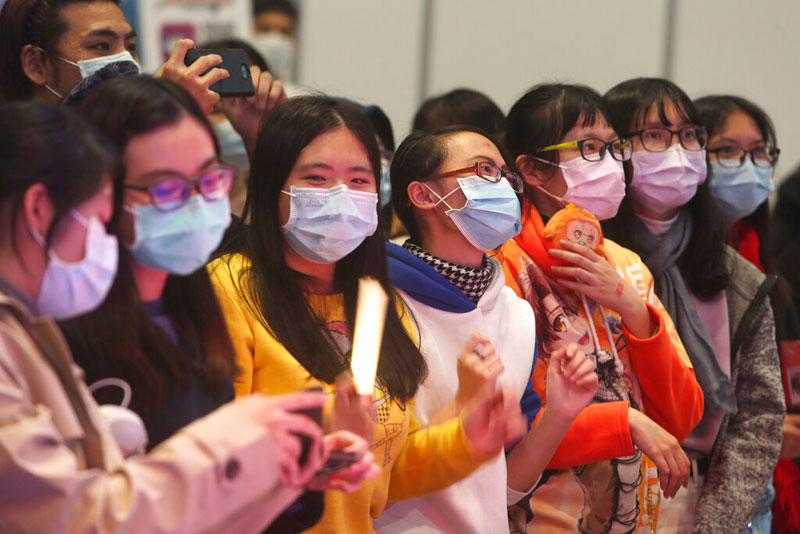 A mysterious illness had stricken seven patients at a hospital, and a doctor tried to warn his medical school classmates. “Quarantined in the emergency department,” the doctor, Li Wenliang, wrote in an online chat group on December 30, referring to patients.

“So frightening,” one recipient replied, before asking about the epidemic that began in China in 2002 and ultimately killed nearly 800 people. “Is SARS coming again?”

In the middle of the night, officials from the health authority in the central city of Wuhan summoned Dr Li, demanding to know why he had shared the information. Three days later, police compelled him to sign a statement that his warning constituted “illegal behaviour”.

The illness was not SARS, but something similar: a coronavirus that is now on a relentless march outward from Wuhan, throughout the country and across the globe, killing at least 304 people in China and infecting more than 14,380 worldwide.

The government’s initial handling of the epidemic allowed the virus to gain a tenacious hold. At critical moments, officials chose to put secrecy and order ahead of openly confronting the growing crisis to avoid public alarm and political embarrassment.

A reconstruction of the crucial seven weeks between the appearance of the first symptoms in early December and the government’s decision to lock down the city, based on two dozen interviews with Wuhan residents, doctors and officials, on government statements and on Chinese media reports, points to decisions that delayed a concerted public health offensive.

In those weeks, the authorities silenced doctors and others for raising red flags. They played down the dangers to the public, leaving the city’s 11 million residents unaware they should protect themselves. They closed a food market where the virus was believed to have started, but didn’t broadly curb the wildlife trade.

Their reluctance to go public, in part, played to political motivations as local officials prepared for their annual congresses in January. Even as cases climbed, officials declared repeatedly that there had likely been no more infections.

By not moving aggressively to warn the public and medical professionals, public health experts say, the Chinese government lost one of its best chances to keep the disease from becoming an epidemic.

“This was an issue of inaction,” said Yanzhong Huang, a senior fellow for global health at the Council on Foreign Relations who studies China. “There was no action in Wuhan from the local health department to alert people to the threat.”

The first case, the details of which are limited and the specific date unknown, was in early December. By the time the authorities galvanised into action on January 20, the disease had grown into a formidable threat.

It is now a global health emergency. It has triggered travel restrictions around the world, shaken financial markets and created perhaps the greatest challenge yet for China’s leader, Xi Jinping. The crisis could upend Xi’s agenda for months or longer, even undermining his vision of a political system that offers security and growth in return for submission to iron-fisted authoritarianism.

On the last day of 2019, after Dr Li’s message was shared outside the group, the authorities focused on controlling the narrative. The police announced that they were investigating eight people for spreading rumours about the outbreak.

That same day, Wuhan’s health commission, its hand forced by those “rumours”, announced that 27 people were suffering from pneumonia of an unknown cause. Its statement said there was no need to be alarmed. “The disease is preventable and controllable,” the statement said.

Li, an ophthalmologist, went back to work after being reprimanded. On January 10, he treated a woman for glaucoma. He did not know she had already been infected with the coronavirus, probably by her daughter. They both became sick. So would he.

Hu Xiaohu, who sold processed pork in the Huanan Seafood Wholesale Market, sensed by late December that something was amiss. Workers were coming down with nagging fevers. No one knew why but, Hu said, several were in hospital quarantine.

The market occupies much of a block in a newer part of the city, sitting incongruously near apartment buildings and shops catering to the growing middle class. It is a warren of stalls selling meats, poultry and fish, as well as more exotic fare, including live reptiles and wild game that some in China prize as delicacies. According to a report by the city’s centre for disease control, sanitation was dismal, with poor ventilation and garbage piled on wet floors.

In hospitals, doctors and nurses were puzzled to see a cluster of patients with symptoms of a viral pneumonia that did not respond to the usual treatments. They soon noticed that many patients had one thing in common: They worked in Huanan market.

On January 1, police officers showed up at the market, along with public health officials, and shut it down. Local officials issued a notice that the market was undergoing an environmental and hygienic cleanup related to the pneumonia outbreak. That morning, workers in hazmat suits moved in, washing out stalls and spraying disinfectants.

It was, for the public, the first visible government response to contain the disease. The day before, on December 31, national authorities had alerted the World Health Organisation’s office in Beijing of an outbreak.

City officials struck optimistic notes in their announcements. They suggested they had stopped the virus at its source. The cluster of illnesses was limited. There was no evidence the virus spread between humans.

Nine days after the market closed, a man who shopped there regularly became the first fatality of the disease, according to a report by the Wuhan Health Commission, the agency that oversees public health and sanitation. The 61-year-old, identified by his last name, Zeng, already had chronic liver disease and a tumour in his abdomen, and had checked into Wuhan Puren Hospital with a raging fever and difficulty breathing.

The authorities disclosed the man’s death two days after it happened. They did not mention a crucial detail in understanding the course of the epidemic. Zeng’s wife had developed symptoms five days after he did.

About 32km from the market, scientists at the Wuhan Institute of Virology were studying samples from the patients checking into the city’s hospitals. One of the scientists, Zheng-Li Shi, was part of the team that tracked down the origins of the SARS virus, which emerged in the southern province of Guangdong in 2002.

As the public remained largely in the dark about the virus, she and her colleagues quickly pieced together that the new outbreak was related to SARS. The genetic composition suggested a common initial host: bats.

As the virus spread in early January, the mayor of Wuhan, Zhou Xianwang, was touting futuristic healthcare plans for the city.

It was China’s political season, when officials gather for annual meetings of People’s Congresses — the Communist Party-run legislatures that discuss and praise policies. It is not a time for bad news.

When Zhou delivered his annual report to the city’s People’s Congress on January 7 against a backdrop of bright red national flags, he promised the city top-class medical schools, a World Health Expo, and a futuristic industry park for medical companies. Not once did he or any other city or provincial leader publicly mention the viral outbreak.

Shortly after, Wuhan went ahead with a massive annual potluck banquet for 40,000 families from a city precinct, which critics later cited as evidence that local leaders took the virus far too lightly.

As the congress was taking place, the health commission’s daily updates on the outbreak said again and again that there were no new cases of infection, no firm evidence of human transmission and no infection of medical workers.

“We knew this was not the case!” said a complaint later filed with the National Health Commission on a government website. The anonymous author said he was a doctor in Wuhan and described a surge in unusual chest illnesses beginning January 12.

Officials told doctors at a top city hospital “don’t use the words viral pneumonia on the image reports”, according to the complaint, which has since been removed. People were complacent, “thinking that if the official reports had nothing, then we were exaggerating”, the doctor explained.

Even those stricken felt lulled into complacency.

When Dong Guanghe developed a fever on January 8 in Wuhan, his family was not alarmed, his daughter said. He was treated in the hospital and sent home. Then, 10 days later, Dong’s wife fell ill with similar symptoms.

“The news said nothing about the severity of the epidemic,” said the daughter, Dong Mingjing. “I thought that my dad had a common cold.”

“If there are no new cases in the next few days, the outbreak is over,” Guan Yi, a respected professor of infectious diseases at the University of Hong Kong, said on January 15.

WHO’s statements during this period echoed the reassuring words of Chinese officials.

It had spread. Thailand reported the first confirmed case outside China on January 13.

The first deaths and the spread of the disease abroad appeared to grab the attention of the top authorities in Beijing. The national government dispatched Zhong Nanshan, a renowned and now-semiretired epidemiologist who was instrumental in the fight against SARS, to Wuhan to assess the situation.

He arrived on January 18, just as the tone of local officials was shifting markedly. A health conference in Hubei province that day called on medical workers to make the disease a priority. An internal document from Wuhan Union Hospital warned its employees that the coronavirus could be spread through saliva.

On January 20, more than a month after the first symptoms spread, the current of anxiety that had been steadily gaining strength exploded into public. Dr Zhong announced in an interview on state television that there was no doubt that the coronavirus spread with human contact. Worse, one patient had infected at least 14 medical personnel.

President Xi, fresh from a state visit to Myanmar, made his first public statement about the outbreak, issuing a brief set of instructions.

It was only with the order from Xi that the bureaucracy leapt into action. At that point the death toll was three; in the next 11 days, it would rise above 200.

With the crisis worsening, Dr Li’s efforts are no longer viewed as reckless. A commentary on the social media account of the Supreme People’s Court criticised the police for investigating people for circulating rumours.

Li is 34 and has a child. He and his wife are expecting a second in the summer. He is now recovering from the virus in the hospital where he worked. In an interview via text messages, he said he felt aggrieved by the police actions.

“If the officials had disclosed information about the epidemic earlier,” he said, “I think it would have been a lot better. There should be more openness and transparency.”