The Chinese embassy on August 12 applied for clearance of the new dates, from August 16 to 22, 'for replenishment purposes of the vessel' 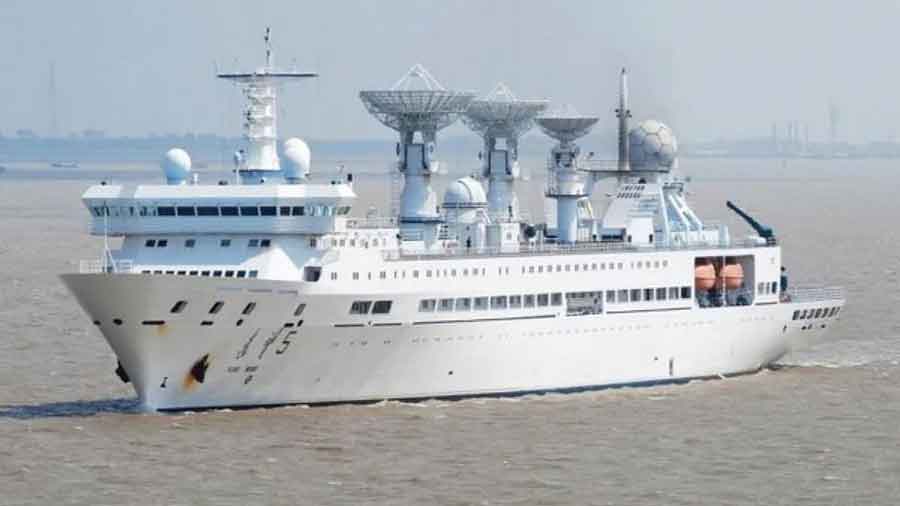 China on Monday said Sri Lanka has allowed its satellite and missile tracking ship to berth at the Hambantota port on Tuesday, but declined to reveal details of talks with Colombo leading to the bankrupt island's government reversing its earlier stand to defer the high-tech vessel's entry.

"As you said, Sri Lanka has given Yuan Wang-5 the permission to berth at its port," Chinese Foreign Ministry spokesman Wang Wenbin told a media briefing here, responding to a question about Colombo giving its nod for the ship to berth at Hambantota Port, days after asking it to defer the visit following reported concerns expressed by India and the US.

Wang, however, declined to go into details of Beijing's talks with Colombo in relation to the berthing of the ship.

"As for the specific questions that you raised, we have mentioned China's position quite a few times," Wang said when asked about what were the consultations that were held and the concerns addressed.

After Sri Lanka asked it to defer the entry of the ship, China on August 8 reacting angrily said it was "completely unjustified" for certain countries to cite the so-called security concerns to pressure Colombo and "grossly interfere" in its internal affairs.

The Sri Lankan Foreign Ministry in its statement explained that it had on August 5 requested the Chinese embassy that the visit of the Chinese ship scheduled between August 11 and 17 to Hambantota port be deferred "in light of certain concerns raised with the ministry" until the conduct of further "consultations on the matter."

"The government has since engaged in extensive consultations at a high level through diplomatic channels with all parties concerned, with a view to resolving the matter in a spirit of friendship, mutual trust, and constructive dialogue, taking into account the interests of all parties concerned, and in line with the principle of sovereign equality of states," the statement said.

The Chinese embassy on August 12 applied for clearance of the new dates -- from August 16 to 22 -- "for replenishment purposes of the vessel".

"Having considered all material in place", the clearance to the Chinese embassy "was conveyed for the deferred arrival of the vessel between August 16 and 22", the Sri Lankan statement said.

The ship with some 2,000 sailors on board with facilities to track satellites and intercontinental missiles will berth at the Hambantota Port which China has taken for a 99-year lease as a debt swap.

Colombo's permission has also raised speculation that Beijing could make a positive announcement about Sri Lanka's previous request to defer the loans it owned to China and plead for bridge financing to tide over the crisis until it received International Monetary Fund (IMF) support.

China, which has extensive investments in Sri Lanka running into billions of dollars, has provided USD 73 million in aid and shipments of rice but maintained a steady silence on Colombo's request for a bailout package as it became bankrupt after running out of foreign exchange reserves in April this year.

India stepped in with about USD 4 billion support in terms of multiple lines of credit to buy essential commodities such as fuel, food, and medicines.

China is the main creditor of Sri Lanka with investment in infrastructure. Debt restructuring of Chinese loans would be key to the island's success in the ongoing talks with the IMF for a bailout.

The southern deep-sea port of Hambantota, which has been developed largely with Chinese loan, is considered strategically important because of its location.

India has said that it carefully monitors any development having a bearing on its security and economic interests.

New Delhi is concerned about the possibility of the ship's tracking systems attempting to snoop on Indian installations while being on its way to the Sri Lankan port.

The ties between India and Sri Lanka came under strain after Colombo gave permission to a Chinese nuclear-powered submarine to dock in one of its ports in 2014.

India's concerns have been focused on Hambantota port in particular.

In 2017, Colombo leased the southern port to China Merchant Port Holdings for 99 years, after Sri Lanka was unable to keep its loan repayment commitments, fanning fears over the potential use of the port for military purposes.

The Chinese Foreign Ministry on Monday said it was "completely unjustified for certain countries to cite the so-called security concerns to pressure Sri Lanka.

India on Friday rejected China's "insinuations" that New Delhi pressured Colombo against the planned visit by the Chinese research vessel, but asserted that it will take decisions based on its security concerns.

External Affairs Ministry Spokesperson Arindam Bagchi said in New Delhi that Sri Lanka, as a sovereign country, makes its own independent decisions and noted that India would make its judgment on its security concerns based on the prevailing situation in the region, especially in the border areas.