The vote is due to take place next week, and if Boris Johnson succeeds, he can take UK out of EU by October 31 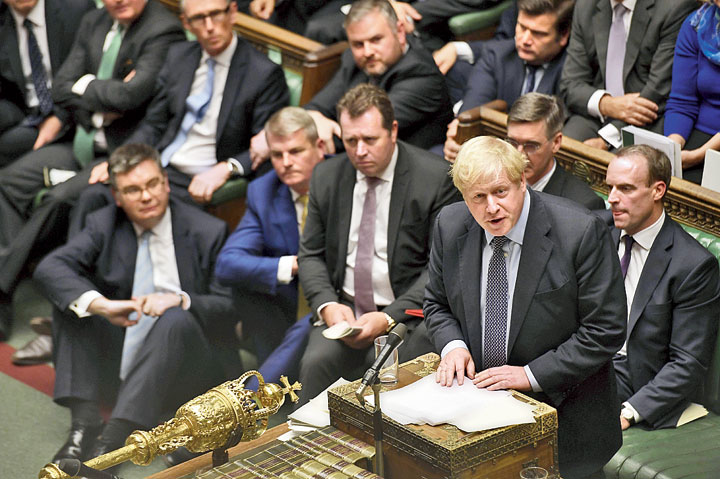 Boris Johnson has done something that probably no other world leader has thought of before by simultaneously sending two letters in which the British Prime Minister has deliberately contradicted himself.

In the first letter, which he pointedly left unsigned, he asked the European Union to extend the Brexit negotiating cut-off date for the UK from October 31, 2019, to January 31,2020.

In the second, he pleaded that the extension should not be granted.

The letters were sent to Donald Tusk, president of the European Council, who was addressed as “Dear Mr President” in the first letter, which ended, “Yours sincerely, Prime Minister of the United Kingdom of Great Britain and Northern Ireland.”

Boris had previously said that he would rather be “dead in a ditch” than seek an extension but was required to do so after MPs voted for a motion tabled by Hilary Benn from the Labour Party. This stipulated that unless a Brexit deal was agreed by 11pm on October 19, the Prime Minister was instructed to seek an extension to the Brexit process.

On Saturday, Boris pulled a vote on his Brexit deal after MPs voted 322-306 to delay the process.This vote is due to take place either on Monday or Tuesday, and if Boris succeeds, he can still take the UK out of the EU by October 31.

In the second, much warmer letter, addressed to “Dear Donald” and signed, “Yours sincerely, Boris Johnson,” he made it clear he did not want the extension sought in the first letter.

“While it is open to the European Council to accede to the request mandated by Parliament or to offer an alternative extension period, I have made clear since becoming Prime Minister, and made clear to Parliament again today, my view, and the government’s position, that a further extension would damage the interests of the UK and our EU partners, and the relationship between us.”

Quite a few politicians and lawyers are speculating Boris could end up in court again, having been told by the Supreme Court that his decision to prorogue Parliament was “unlawful”.

Labour’s shadow chancellor John McDonnell said on Sky News’s Sophy Ridge on Sunday: “He may well be in contempt of Parliament or the courts themselves because he’s clearly trying to undermine the first letter and not signing the letter.

“He’s behaving a bit like a spoilt brat. Parliament made a decision, he should abide by it and this idea that you send another letter contradicting the first, I think it flies in the face of what both Parliament and the courts have decided.”

This was emphasised by the shadow Brexit secretary, Sir Keir Starmer, who told BBC TV’s Andrew Marr Show that Boris was being “childlike” and adopting a “silly approach”.

“The law is very clear,” said Starmer, who was Director of Public Prosecutions and head of the Crown Prosecution Service from 2008 to 2013.

“He should have signed one letter in accordance with the law,” he added. “If we crash out because of what he has done with the letters…without a deal, he bears personal responsibility for that.”

Most analysts expect the political deadlock can only be resolved with a general election although Labour and other Opposition parties are pushing for a second referendum that could overturn the result of the first in June 2016 in which there was a 52-48 vote in favour of leaving the European Union.

It is said Boris’s election manifesto will pitch “the people vs Parliament”. But the battle is to some extent also becoming one between “papers and the people”.

Although an estimated one million people turned out on “Super Saturday” to protest against Brexit, their concerns were dismissed by Leave supporting newspapers.

“The House of Fools,” reads the Mail on Sunday’s front-page headline, above photographs of four of the “posturing MPs” who it says “subjected us to yet more agonising delay”.

“Oliver Twits,” reads The Sun on Sunday’s headline. The paper calls Letwin a “buffoon” who has “persuaded zombie MPs to block Brexit”.

“Why won’t they let us leave?” asks the front page of the Sunday Express, which voices its “outrage” that Parliament voted “to obstruct Boris’s breakthrough Brexit deal”.

The Independent website, on the other hand, pictures the scene outside the Commons, where campaigners for another referendum gathered in Parliament Square. It says a million people joined the march for a “Final Say on Brexit”, on what was “the day you made Johnson listen”.

The Observer pictures the massed demonstrators, next to a headline reading: “A million take to the streets for public vote.” In a comment piece, Will Hutton writes: “We marched with hope but few expectations. Yet history will side with us.”

But The Sunday Times dismisses the masses as “A vast throng, too posh to putsh.”