The British politician had quit politics last year over Brexit, citing a conflict 'between family loyalty and the national interest' 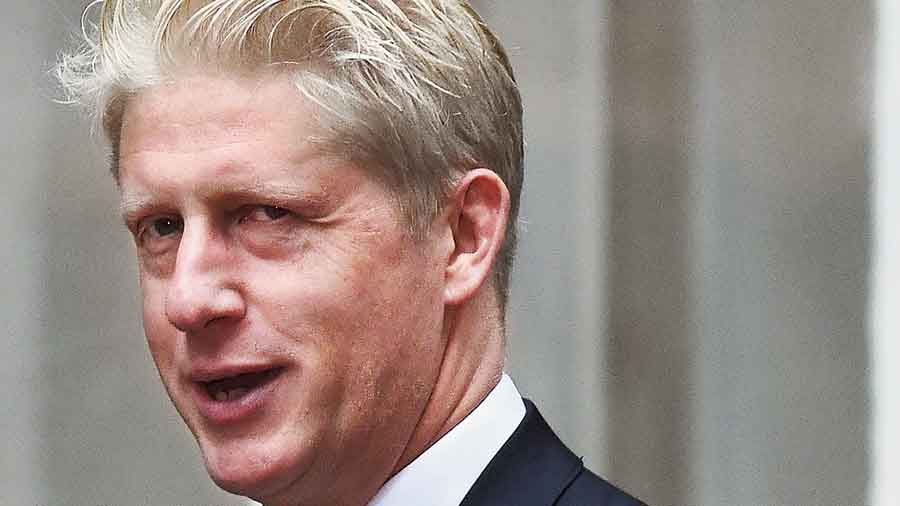 The Prime Minister, Boris Johnson, 56, has moved to resolve a family quarrel by giving a peerage to his brother, Jo, 48, who resigned from his brother’s government and quit politics altogether in September last year over Brexit, citing a conflict “between family loyalty and the national interest”.

Jo, who was once the Financial Times’s India correspondent based in Delhi and then developed good relationships with his Indian counterparts as universities and science minister, is expected to add a sympathetic voice in support of India when he joins the Tory benches in the House of Lords.

His tweet announcing his departure from the government last year was something of a bombshell. “It’s been an honour to represent Orpington for 9 years & to serve as a minister under three PMs,” said Jo,a much quieter figure compared with flamboyant elder brother. In recent weeks I’ve been torn between family loyalty and the national interest — it’s an unresolvable tension & time for others to take on my roles as MP & Minister….It’s time to move on.”

The BBC’s assistant political editor, Norman Smith, explained Jo’s departure by commenting: “This isn’t some minor family tiff. This is Jo Johnson trying to cut the political legs from under his brother in a very, very public way because he is saying in effect, ‘I don’t really trust my brother. I don’t have confidence in what he’s doing. I don't think I can carry on as a Tory MP. And the timing and the fact that he’s chosen to go public with it in this way is designed to basically put the skids under his brother.”

This was also speculation that Jo had reservations about Boris splitting from his wife of 25 years, Marina Wheeler, while she was battling cervical cancer. It was also not known what Jo thought of his brother’s girlfriend, Carrie Symonds.

Since then, Boris has survived a near death experience after contracting coronavirus. His divorce from Marina has been finalised, and he has had a baby son with 32-year-old Carrie, who now lives in 10 Downing Street with the Prime Minister as his “fiancée”. After leaving politics, Jo has kept a low profile but he did turn up on October 2 last year for the commemoration of Gandhi’s 150 birth anniversary held by the statue of the Mahatma in Parliament Square in London. Jo is among 36 people being elevated to the Lords.

Apart from Ian Botham, former England all-rounder and staunch Brexit supporter, whose elevation has been well trailed,, they include the columnist Charles Moore, who has been Boris’s editor at The Daily Telegraph and the Russian media mogul Evgeny Lebedev, owner of the London Evening Standard; Veronica Wadley, a former editor of the Standard and Boris’s former colleague at the Daily Telegraph where she was deputy editor; and Philip May, husband of former Prime Minister Teresa May.

Boris has also offered an olive branch by giving peerages to two former Tory anti-Brexit heavyweights who were effectively thrown out the Conservative for voting against his government – former chancellors Ken Clarke and Philip Hammond.

Among people of Asian origin, peerages have been given to Conservative Party Treasurer Aamer Sarfraz, and Prem Sikka, a professor of  accounting at the University of Sheffield. The latter was nominated by the former Labour leader Jeremy Corbyn.

It is traditional for outgoing Speakers to be sent to the Lords but John Bercow has been denied this honour because of his regular clashes with senior Tory ministers when he was in charge of the Commons from 2009 to 2019.

Inevitably, Boris was accused of choosing peers from a close circle of friends and acolytes.

Scottish National Party MP Pete Wishart called the selection “the worst kind of cronyism”, accusing the Prime Minister of giving jobs for life to “friends and those who have done him favours”.

The Liberal Democrats’ leader in the Lords, Lord Newby, added: “By giving a large number of his cronies peerages, he has shown that the Tories have abandoned any pretence of reducing the size of the bloated (830 strong) House of Lords.”