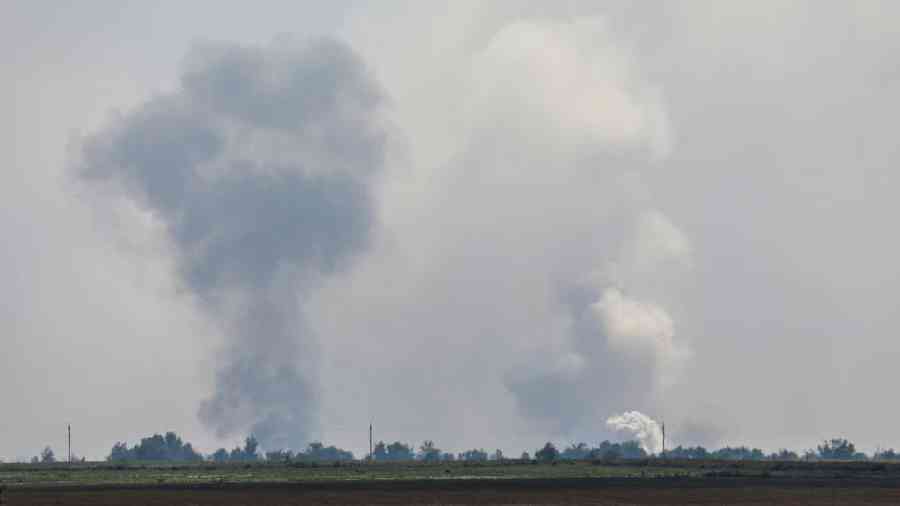 Huge explosions rocked a Russian ammunition depot on the occupied Crimean Peninsula on Tuesday morning, delivering another embarrassing blow to Moscow’s forces a week after blasts at a Russian air base in the same region destroyed several fighter jets.

A senior Ukrainian official, speaking on the condition of anonymity to discuss the operation, said that an elite Ukrainian military unit operating behind enemy lines was responsible for the explosions. Russia’s defence ministry said in a statement that the episode was an “act of sabotage”, according to the Russian state news agency RIA Novosti.

The apparent use of covert forces behind enemy lines underscored the inventiveness of Ukraine’s forces.

Since the war began, they have adopted unconventional tactics in the hopes of levelling the playing field while trying to repel attacks from a much larger and better-equipped Russian military.

Although Ukraine’s leaders did not publicly claim responsibility, an adviser to President Volodymyr Zelensky confirmed that the explosions had occurred. The adviser, Mykhailo Podolyak, also appeared to hint at Ukrainian involvement.

“A reminder: Crimea of a normal country is about the Black Sea, mountains, recreation and tourism, but Crimea occupied by Russians is about warehouses explosions and high risk of death for invaders and thieves. Demilitarization in action,” he wrote on Twitter.

And although he did not confirm Ukraine’s involvement, Andriy Yermak, the head of the presidential office in Ukraine, said on the Telegram messaging app that the country’s armed forces would continue the “demilitarisation” of Crimea and other captured territories.

At least two civilians were wounded in the blasts in the northern part of the peninsula, and as many as 3,000 were evacuated from the area around the weapons depot, the Kremlin-installed head of Crimea, Sergei Aksyonov, said on Telegram.

The explosion occurred at a temporary ammunition storage site near a military base, he said. The ammunition then continued exploding after the initial blast. “At the moment detonations are continuing,” Aksyonov said.

The Russian defence ministry said that there were no serious casualties and that the explosions damaged power lines, railroad tracks and homes.