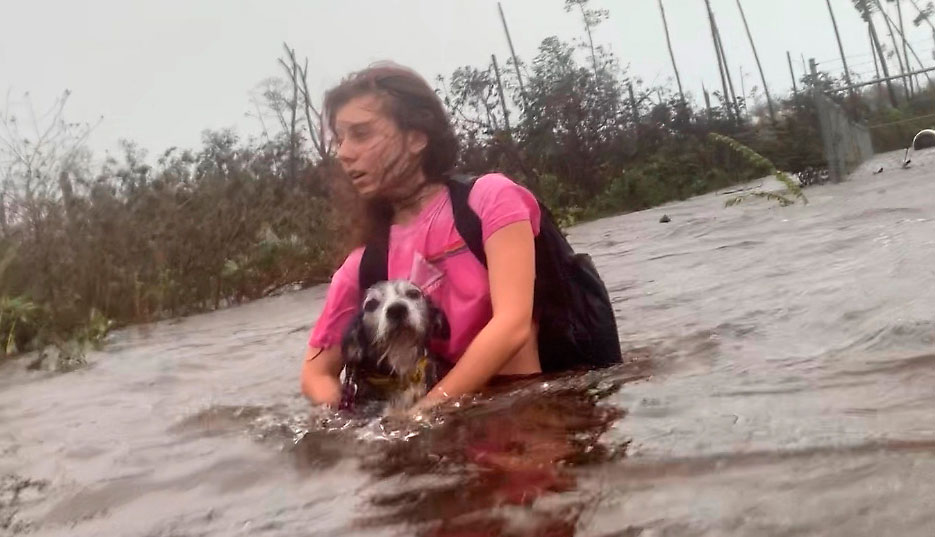 Hurricane Dorian grew in size and picked up speed on Tuesday, and was forecast to come “dangerously close” to Florida’s coast after pounding Grand Bahama Island for about a day, killing at least five people.

Dorian, which over the weekend had been one of the most powerful Atlantic hurricanes on record, inundated homes with floodwater in the Abaco Islands in the northern Bahamas ahead of its expected advance on the US east coast, where more than a million people had been ordered evacuated.

The hurricane weakened early on Tuesday to a Category 2 on the five-step Saffir-Simpson Wind Scale, with maximum sustained winds of 110 miles per hour (175kmph), the US National Hurricane Center said. It was moving northwest at 2mph (1.6kmph), below walking speed, and was about 105 miles (170km) east of Fort Pierce, Florida.

The NHC warned that Dorian remained dangerous despite the reduced wind speed.

“The headline for this #Dorian advisory is NOT that the wind speed has slightly decreased,” it said on Twitter. “The combined wind, surge, and floods hazards are the same or even worse since the hurricane has become larger.”

The exact toll of the devastation in the Bahamas will not be clear until the storm passes and rescue crews can get on the ground. The storm lashed the islands for almost 24 hours, and the death toll was likely to rise, said Iram Lewis, an MP, in an interview with CNN.

“It is safe to say, unfortunately, that that number will go up,” Lewis said, adding that extensive floodwaters were making it difficult for rescuers to reach stranded residents. He saw extensive numbers of destroyed houses, felled trees and stunned residents as he surveyed the area he said, adding: “It is just unbelievable.”

As many as 13,000 homes in the Bahamas may have been destroyed or severely damaged, the International Federation of Red Cross and Red Crescent Societies said.

Efforts to reach officials in the Bahamas by phone on Tuesday were unsuccessful.

Dorian was expected to churn towards Florida by day’s end, before bringing its powerful winds and dangerous surf along the coasts of Georgia, South Carolina and North Carolina by late Thursday.

Forecasters have told Floridians not to become complacent because the storm is now predicted to stay off the coast.