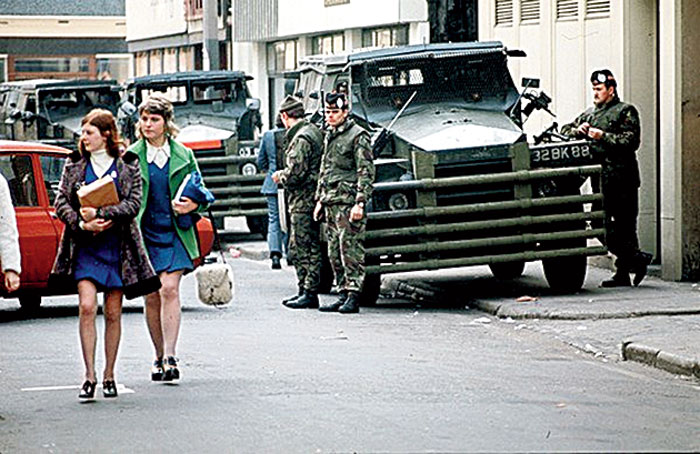 In the days when I was on the staff of The Daily Telegraph in London, it was the practice of the paper’s all powerful managing editor, Peter Eastwood, to send reporters from the newsroom in London to Belfast so that experience of covering the civil war in Northern Ireland would train us to become war correspondents.

Operation Banner, as it was called, lasted from August 1969 to July 2007 — and claimed the lives of 722 British military personnel.

British soldiers, sent in to keep the peace between the majority Protestant community and the minority Catholics, were initially welcomed as friends but soon became drawn into the increasingly violent civil war and a target, in particular, for the IRA (Irish Republican Army).

Journalists stayed at the Europa Hotel in Belfast, whose windows was shattered so often by explosions that it came to be regarded as probably the most bombed hotel in the world.

As someone totally innocent of the politics of Northern Ireland, I remember the advice I was given by Gerry Kemp, one of the veterans in the newsroom. He was over 6 feet tall, built like a solder himself and often called “the colonel” by his colleagues.

The logic was that anyone spotted running was more likely to attract sniper fire, either from the IRA or from British soldiers. He himself made a point of wearing a Stetson and smoking a cigar when sauntering nonchalantly across the badlands of Northern Ireland.

On one occasion, I stayed with the British soldiers in the officer’s mess and saw the men black up their faces before they asked me to jump into their vehicle as they went out on night patrol. They allowed me to look through the night sight on their guns, which enhanced available light and made it possible to see even in pitch blackness.

When the vehicle pulled into one of the Catholics areas, the residents stopped banging their litter bin lids which they used to do to demonstrate their hostility to the presence of the soldiers.

The residents had never before seen an Indian reporter. “Who is that!” came an incredulous voice.

“Father Christmas,” one of the soldiers shouted back.

There was a bit of good humoured though slightly racist laughter, as a callow Bengali youth brought peace to Northern Ireland for about 10 seconds.

With debate currently raging about Brexit and the precise status of the border between the Irish Republic, which will remain in the EU, and Northern Ireland, which as part of the UK will not, there are genuine fears that the men with guns will return.

Peace came to the province as part of the deal between all the warring factions signed in Belfast on Good Friday, April 10, 1998. Under the “Good Friday agreement”, the IRA agreed to decommission its weapons while the British released many of the men of violence — even killers — serving long prison terms.

Earlier this year in an article in the New York Times, the Indian author Pankaj Mishra expressed the opinion that it served the British right that they were now coping with all the problems of partition in Northern Ireland.

In his article, The Malign Incompetence of the British Ruling Class, Mishra said that “with Brexit, the chumocrats who drew borders from India to Ireland are getting a taste of their own medicine”.

He argued: “The Brexiteers, pursuing a fantasy of imperial-era strength and self-sufficiency, have repeatedly revealed their hubris, mulishness and ineptitude over the past two years.

“Such a pattern of egotistic and destructive behaviour by the British elite flabbergasts many people today. But it was already manifest seven decades ago during Britain’s rash exit from India.”

“It is actually more accurate, for those invoking British history, to say that partition — the British Empire’s ruinous exit strategy — has come home. In a grotesque irony, borders imposed in 1921 on Ireland, England’s first colony, have proved to be the biggest stumbling block for the English Brexiteers chasing imperial virility. Moreover, Britain itself faces the prospect of partition if Brexit, a primarily English demand, is achieved and Scottish nationalists renew their call for independence.”

The problems of Northern Ireland spilled over into mainland Britain. The Daily Telegraph’s night editor, the late Andrew Hutchinson, made a point of sending me to cover a minor device which went off outside Harrow school at around midnight on one occasion. He held back the paper so that he could splash with what had been a relatively inconsequential affair. But then Andrew (like Churchill and Nehru) was a Harrovian.

On another occasion, I went to a bomb explosion outside the Tory Carlton Club. Again, no one was hurt.

But when the IRA exploded bombs in Birmingham pubs on 21 November 1974, 21 people were killed and injuring 182 others.

Indira Gandhi was among the first to send messages of support when Margaret Thatcher, the prime minister, escaped an assassination attempt on 12 October 1984 when the IRA blew up the Grand Hotel during the Tory party conference. But five others were killed and 31 injured. I stood outside the crumbling hotel and covered the “Iron Lady’s” defiant speech that evening that the terrorists would never win.

On Wednesday, relatives of loved ones were recalling some of 3,600 people killed and thousands maimed during the last 50 years. Some Tory MPs now want to change the law to give the army immunity from prosecution for civilians shot during operations in Britain and abroad.