Shift to give refugees a better life, says Hasina govt; critics say they were coerced 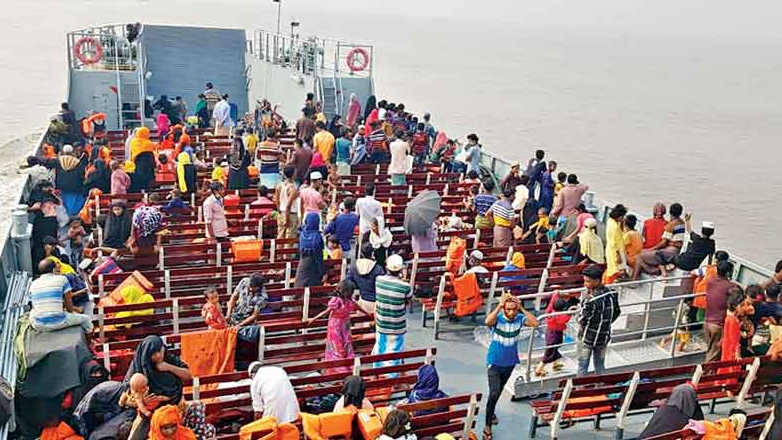 The Sheikh Hasina government on Friday relocated 1,642 Rohingya to Bhasan Char, an island in the Bay of Bengal under the Hatiya upazila of Noakhali.

According to an official source, the relocation was part of a phased shift of over 100,000 refugees from the overcrowded camps in Cox’s Bazar on the southern part of Bangladesh.

Over 1 million Rohingya, persecuted Muslim minority from Myanmar, have been given shelter by the Hasina government in several camps around Cox’s Bazar.

The camps have become the world’s largest refugee settlement since 2017 when extreme violence erupted in Myanmar’s Rakhine state and over 7,25,000 civilians were forced to flee their homes and seek shelter in neighbouring Bangladesh.

“The relocation became imperative in the face of growing concern over the extreme congestion in the camps of Cox’s Bazar and to avert any risk of death due to landslides and other unwarranted incidents,” said Shahriar Alam, minister of state for foreign affairs in the Hasina cabinet.

Amid reports of growing criminal activities in the camps and surrounding areas and rapid radicalisation of the stateless refugees, who have been living in the cramped camps on aides provided by the Bangladesh government and some international NGOs, the Hasina administration has been planning their relocation to mitigate security concerns in the country, which has seen a steady rise of radical Islamic forces in the last few years.

The Bangladesh government has maintained that it zeroed in on Bhashan Char — an uninhabited 13,000-acre island, formed by Himalayan silt in 2006 and located in the Bay of Bengal, 37 miles from the Bangladesh coast — for relocation as part of its attempt to give a better life to the Rohingya, considered as the most persecuted minority community in the world.

The plan, however, had drawn criticism as environmentalists, human rights groups and NGOs had raised concerns regarding the fragility of the Bashan Char because to its location and weather.

A fresh controversy broke out recently after reports in some international media that some of the Rohingya, who were shifted on Friday, had been coerced into going to the flood-prone island.

Aware that such a campaign against the relocation attempt — undoubtedly the biggest in recent memory — may help Hasina’s detractors to turn the tables on her as Bangladesh is a Muslim-majority country and there is sympathy for the stateless refugees, the government has been trying to counter the “misinformation narrative” by sharing details of how it spent Taka 2,400 crore from its own budget to create the necessary living conditions at the island.

The foreign ministry said the relocation process was voluntary and they launched it only after some refugee representatives checked the amenities there and gave their consent to relocate.

“Besides, cyclone Amphan proved the strength of the structures of Bhashan Char. Contrary to the apprehension in some quarters, Bhashan Char stood firm against the massive storm. Despite the heightened tidal wave, all the 1,440 houses and 120 shelter stations in the island remained unharmed,” said Alam.

On Day One of the relocation exercise, Bangladeshi journalists were invited to be on the armada, comprising 7 boats and two additional ones carrying supplies, to interact with the refugees who sailed from the Chittagong port.

“I spoke to several Rohingya onboard and spoke to them in detail… None of them complained that they were being forcibly taken to the island. Besides, when I checked the stuff they were carrying, it appeared that they had prepared themselves for the relocation,” said Munni Saha, a journalist with ATN News.

While the Hasina government, widely hailed for extending humanitarian assistance to the fleeing refugees, said that they would do everything possible to temporarily accommodate the refugees, the foreign ministry alsomade it clear that the Rohingya were Myanmar nationals and they must return to Myanmar.

The government sought help from the international community to ensure repatriation of the Rohingya.

“The Government of Bangladesh is doing its best for the safety and security of these temporarily sheltered Myanmar Nationals. At this stage, it is only practical that International Community, including the United Nations, fulfil their responsibility and meaningfully engage with Myanmar to commence repatriation, which is the only durable solution to this crisis,” said Alam.