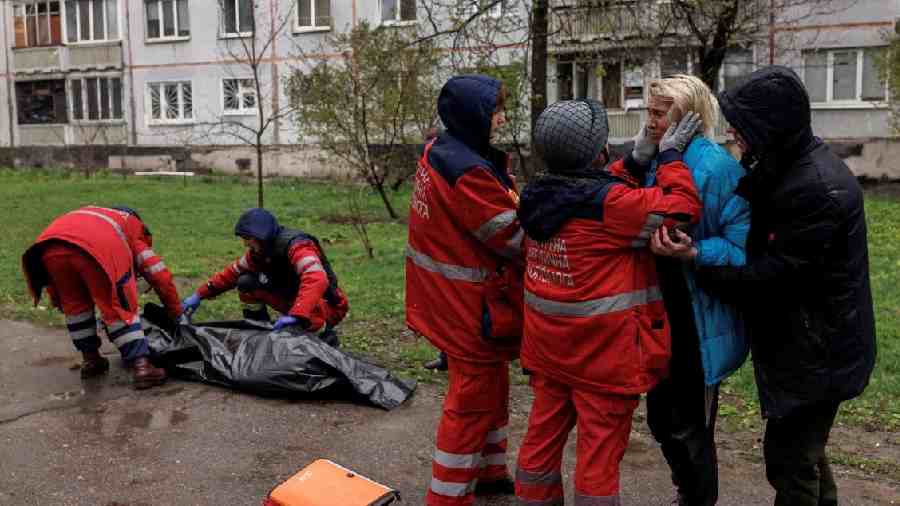 Crew members had to hold Yana Bachek back as they carried her father’s body away following the blasts that hit the Soviet-era apartment complex where they live.
Twitter/ @ManOnelife
Reuters   |   Kharkiv, Ukraine   |   Published 22.04.22, 02:01 AM

Victor Gubarev stepped out to buy bread when he was killed by a fragment from a shell that landed in front of his apartment block in Kharkiv on Monday, minutes before his daughter arrived to find an ambulance crew standing over his body.

Crew members had to hold Yana Bachek back as they carried her father’s body away following the blasts that hit the Soviet-era apartment complex where they live.

An English teacher, she said she had been preparing an online lesson in the kitchen of her one-bedroom apartment, close by her parents’ flat, when the shelling started.

“I remember just the explosion,” she said. “I just returned from shopping and crazy explosions, noise.”

Immediately her mother, Lyubov, called, voice trembling, and said her father had gone to buy bread and was still outside. Her partner, Yevgeniy, stopped her from rushing out straight away in case there were follow-up strikes, as there were, seconds later.

“I began to call him and there was no answer,” she said.

When she pulled on her coat and went out a few minutes later, her anguished reaction to the sight of her father’s body was caught by photographers who had arrived with the ambulances, shortly after the blasts.

“I am sorry. I want to forget it. The picture. The one picture I saw him,” Bachek said.

Along with the mass graves of Bucha near Kyiv or the destruction of the port city of Mariupol, the indiscriminate shelling of cities like Kharkiv has come to symbolise what the Kremlin has called its “special military operation” in Ukraine.

Russia says its incursion is intended to demilitarise and “denazify” Ukraine. Kyiv and its western allies reject that as a false pretext for war.

Russia denies targeting civilians and rejects what Ukraine says is evidence of atrocities, saying Ukraine has staged them to undermine peace talks.

Gubarev’s death was one of at least three on Monday in Kharkiv, which has been subjected to near-daily bombardment since Russia launched its invasion on February 24.

A former driver who started working at the age of 16 and rose to become a vehicle fleet manager for the oil company Gazprom, the 79-year-old had been reluctant to leave because of health problems he and his wife suffered.