SUV falls 26ft from bridge onto river bank during holiday 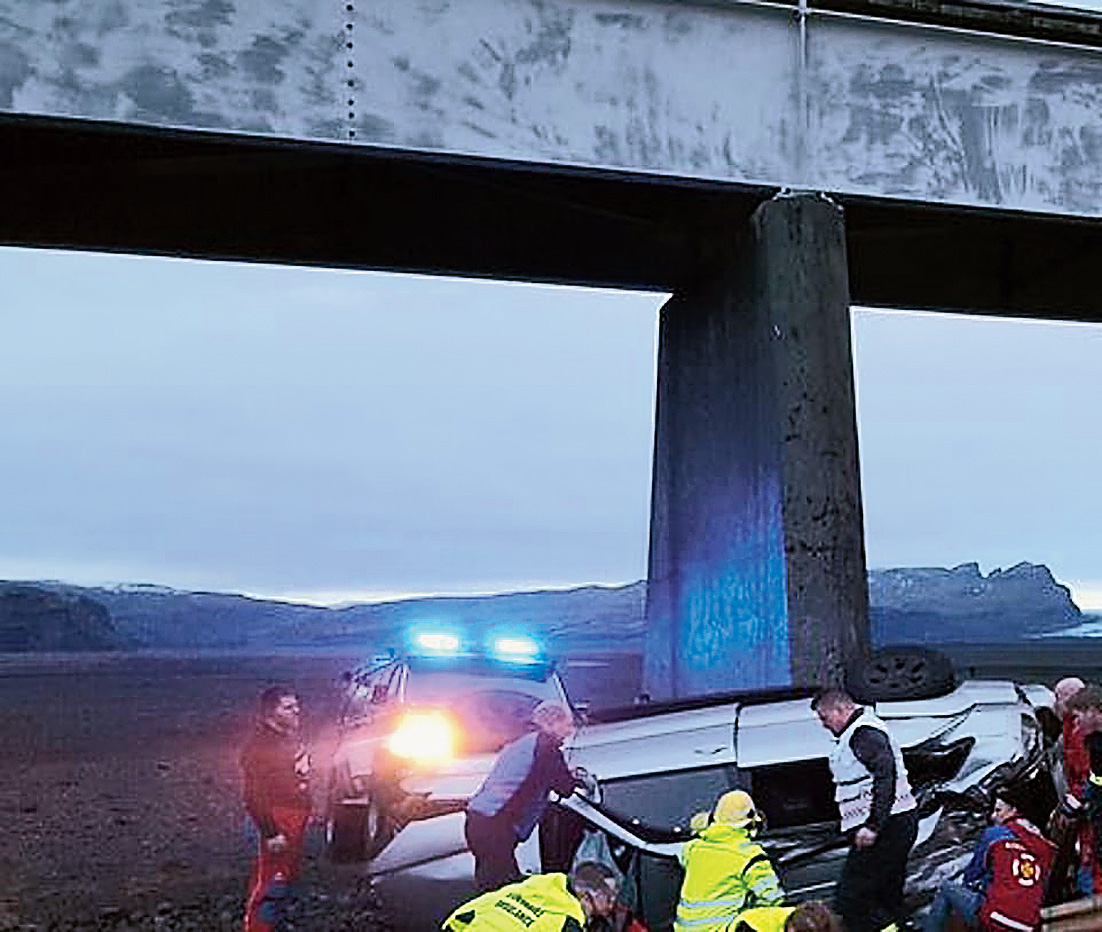 Britain has been shaken out of its holiday mood by a holiday tragedy in Iceland in which a 4x4 SUV plunged 30ft off a bridge on Thursday night, killing two Indian sisters-in-law from London and a 10-month-old baby.

Details have yet to be confirmed but the women were named by British newspapers as Rajshree Laturia and Khushi Laturia and the baby as Shreeprabha. Her age was given as three.

Those who survived the tragedy but were seriously injured include two brothers — Rajshree’s husband, Shreeraj, and Khushi’s husband, Supreme (also named as Noble) — and a boy and a girl aged eight and nine, respectively.

Tour guide Adolf Erlingsson, who was among the first on the scene, said: “The car seemed to have hit the ground many metres from where it stopped. We struggled getting everyone out.

“Four people were out of the car, one of them deceased. Then there were three people trapped in the car and I think two of them were deceased.

“The driver was alive and trapped more or less under the dashboard. It was a horrible sight to come there and see the wreckage and people there.”

The brothers work in the financial sector in London’s Canary Wharf.

The survivors, who are UK nationals, are the responsibility of the British embassy in Reykjavik but Indian ambassador Armstrong Changsan visited them in hospital in the capital where they were airlifted by helicopter from the crash site.

He was quoted as saying: “The situation is very bad. Three people have died and one of them is an infant. There were seven people. Two couples in their thirties and three children. The girl is in surgery.”

“All are stable in hospital,” an Indian embassy spokesman in Reykjavik told The Telegraph on Friday.

The crash happened around 9.30am on Thursday when the Toyota Land Cruiser carrying seven passengers from the extended Indian family crashed through a railing of a one-lane bridge in the south of the country before falling around 26ft onto a river bank.

The 1,377ft bridge over Núpsvötn was built in 1973 and is the second-longest in the country.

The bridge on the national Route 1 is near Skeidararsandur, a vast sand plain of over 800sqmiles in southern Iceland. The area was formed by deposits carried from the nearby Vatnajökull glacier.

Police said the road was not thought to be icy but humidity could have made the surface slippery for the SUV, which was driving eastbound over the bridge.

Chief superintendent of south Iceland police, Sveinn Kristjan Runarsson, said the four injured had been taken to hospital with serious injuries, but added that “we haven’t been able to talk to them about what happened”.

In London, Rajshree and Shreeraj’s Spanish au pair Monica Fontam, 20, told the Mail: “I’m still in a terrible state of shock, we all are. The older daughter was told last night what had happened, that her mother, her aunt and her cousin had been killed.

“Her seven-year-old brother is in a stable condition, as both of the dads are too, and has not yet been told about what’s happened…. They all live here and they’re all very close.”

A family friend told of her shock when she heard about the crash. “It’s terrible, we were together a few days before Christmas and they were getting ready for the trip, they were all so excited to go. It was a Christmas sightseeing holiday, their first with all the children. When my husband and I heard about the crash we were shocked, it couldn’t have happened to a nicer family.

“They were all so sharp, even the kids. So intelligent. A popular and much loved family by so many people, I still can’t believe they are gone and that this has happened.”

A third brother, Sarvesh Laturia, is said to be on his way to Iceland from India.

Most of the information so far has come from the tour guide.

Erlingsson said: “We were trying to get the people out of the car and helping them. It was a very difficult situation.

“Soon after I arrived, we had an SUV with a winch and we used it to lift the car up a little bit to alleviate the pressure on the driver and to try and get him out.”

He said he spoke to some people who were “semi-conscious” outside the vehicle, and added: “I tried to talk a bit to the driver to calm him down. He was trapped inside the car.”

He said the crash occurred in an area that was “the most popular destination on the south coast”.

The Vatnajokull glacier is the largest in Europe, covering 8 per cent of Iceland’s landmass including the island’s tallest peak Hvannadalshnjukur at 2,200 metres tall (7,218ft).

A British foreign office spokesperson said in London: “We are supporting the family of several British nationals who were involved in a road traffic accident in Iceland and are in close contact with the Icelandic authorities.”