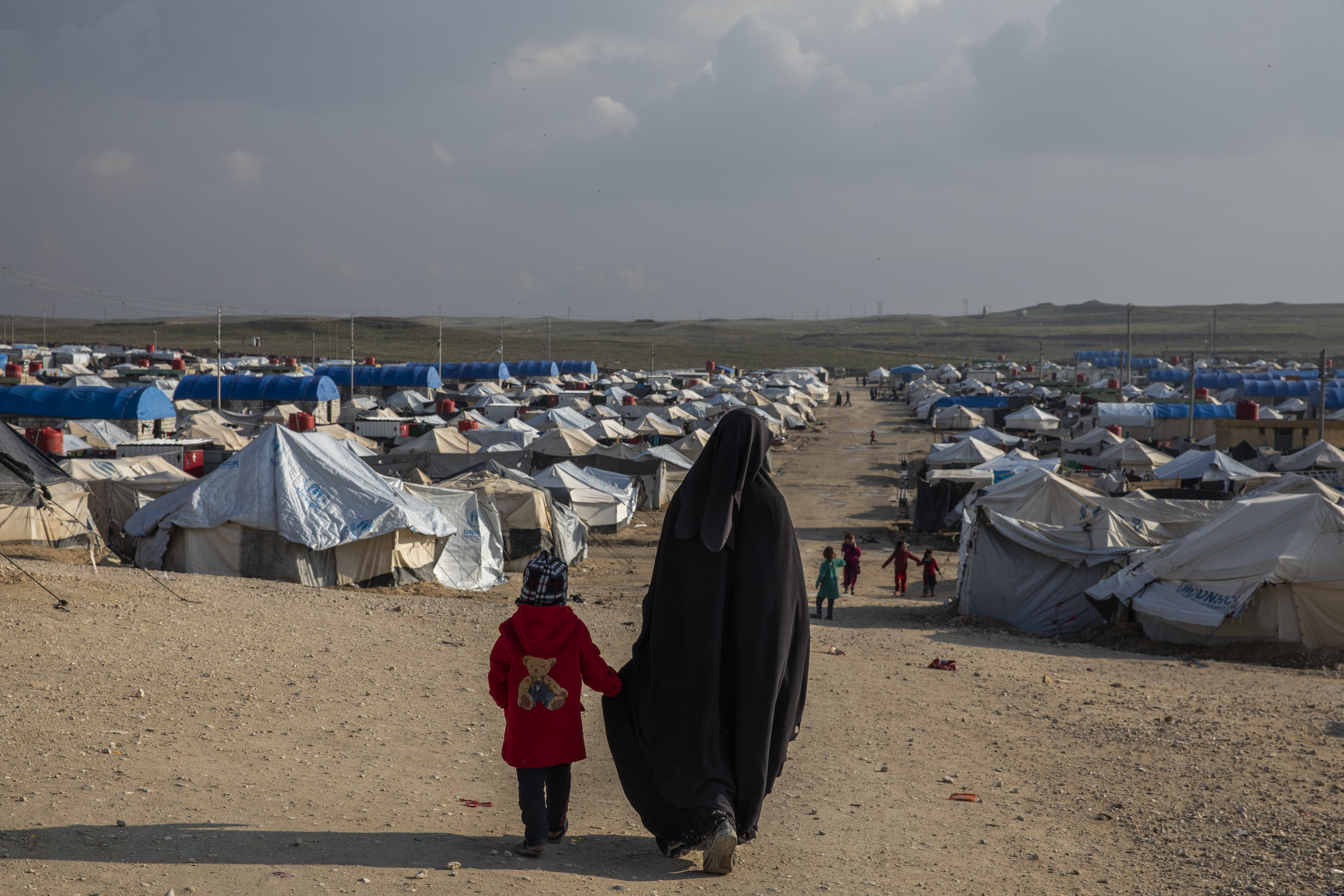 The Al-Hawl refugee camp in Syria, where many who have fled areas that were under control of the Islamic State group are now kept.
The New York times
Rukmini Callimachi And Catherine Porter/NYTNS   |   Al Hawl Camp (Syria)   |   Published 20.02.19, 09:04 AM

She was a 20-year-old college student in Alabama who had become convinced of the righteousness of the Islamic State. So she duped her parents into thinking she was going on a college trip and instead bought a plane ticket to Turkey with her tuition money.

After being smuggled into the caliphate, the student, Hoda Muthana, posted a photograph on Twitter showing her gloved hands holding her American passport. “Bonfire soon,” she promised.

That was more than four years ago. Now, after being married to three Islamic State fighters and witnessing executions like those she had once cheered on social media, Muthana says she is deeply sorry and wants to return home to the United States.

She surrendered last month to the coalition forces fighting the Islamic State and now spends her days as a detainee in a refugee camp in northeastern Syria. She is joined there by another woman, Kimberly Gwen Polman, 46, who had studied legal administration in Canada before joining the caliphate and who possesses dual US and Canadian citizenship.

Both women, interviewed by The New York Times at the camp, said they were trying to figure out how to have their passports reissued and how to win the sympathy of the two nations they scorned.

“I don’t have words for how much regret I have,” said Polman, who was born into a Reformed Mennonite community in Hamilton, Ontario, to an American mother and a Canadian father and who has three adult children.

Muthana, who attended high school in Hoover, Alabama, and the University of Alabama at Birmingham, said she was first drawn to the Islamic State in high school reading Twitter and other social media posts.

“Once I look back on it, I can’t stress how much of a crazy idea it was,” she said. “I can’t believe it. I ruined my life. I ruined my future.”

In a tweet this weekend, President Donald Trump criticised allies including Britain, France and Germany for not taking back hundreds of Islamic State prisoners captured on the battlefield. “The alternative is not a good one in that we will be forced to release them,” he warned.

The President made no mention of American women who had married Islamic State fighters and whom the United States had not returned home. Both Muthana and Polman said they had not been visited by US officials since their capture last month. They also said there was a family of four sisters from Seattle, with four children, who were being detained in a separate camp. A former law enforcement official confirmed that a Seattle family had traveled to Syria to join the Islamic State but did not have further information.

A small number of Americans — as few as 59, according to data tracked by the George Washington University Program on Extremism — are known to have traveled to Syria to join the Islamic State. Nearly all the American men captured in battle have been repatriated, but it is unclear why some of the American women and their children — at least 13 known to The Times — have not been.

Citing the many crimes committed by the Islamic State, Seamus Hughes, deputy director of the George Washington programme, said there were “thousands of legitimate reasons to question the sincerity” of appeals like those of Muthana and Polman.

“The foreign women of the Islamic State, while often reduced to simplistic narratives about ‘jihadi brides,’ ‘brainwashing’ and ‘online grooming,’ aided and abetted many of these atrocities and in some cases directly perpetrated them,” he said.

Muthana and Polman acknowledged in the interview here that many Americans would question whether they deserved to be brought back home after joining one of the world’s deadliest terrorist groups.

“How do you go from burning a passport to crying yourself to sleep because you have so much deep regret? How do you do that?” Polman asked. “How do you show people that?” 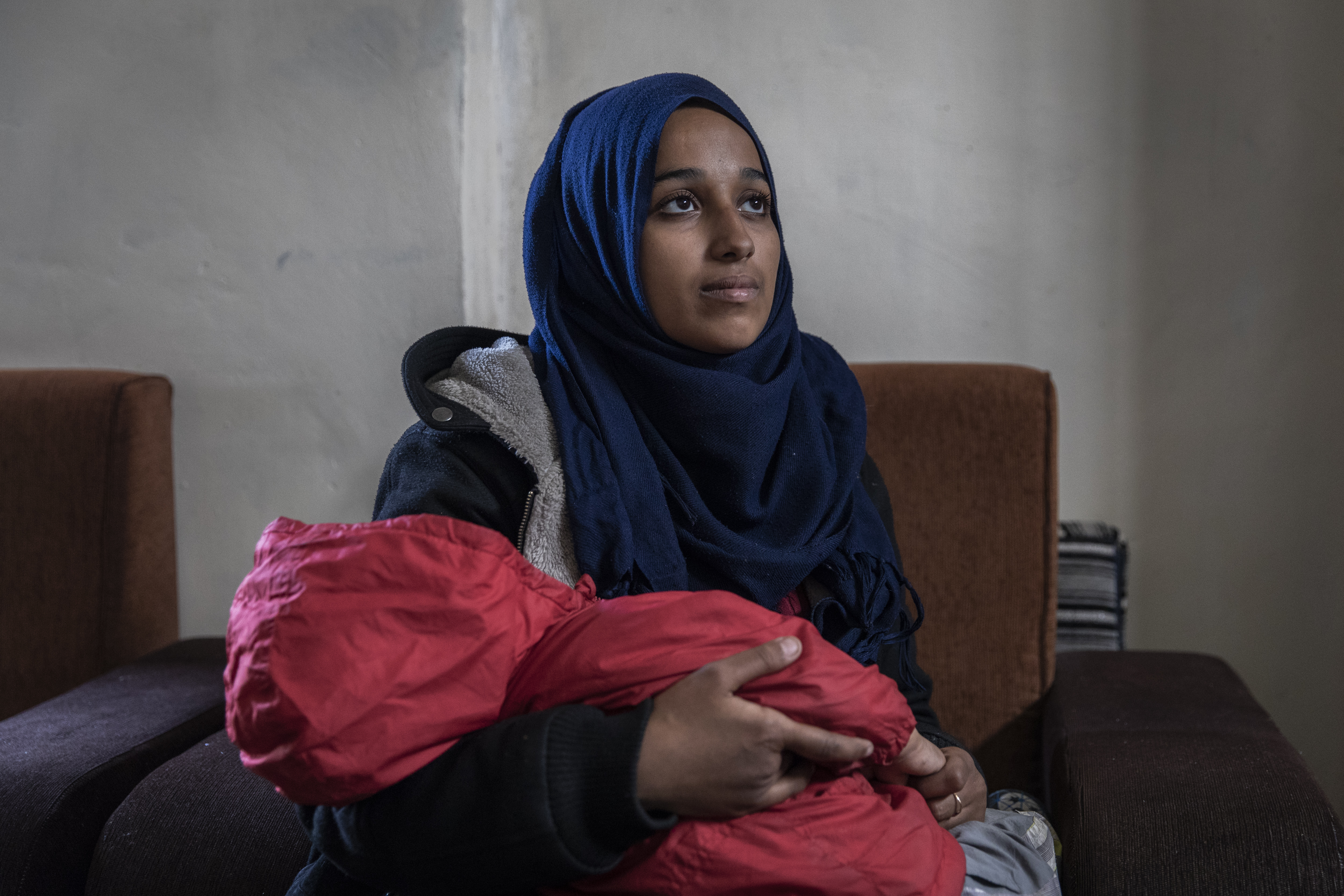 Hoda Muthana, who left Alabama for the Islamic State group’s self-declared caliphate four years ago, at the Al-Hawl refugee camp in Syria.
The New York Times

The daughter of Yemeni immigrants, Muthana grew up in an ultra-strict household — no partying, no boyfriends and no cellphone.

When she finished high school, her father gave her a phone as a graduation gift. It soon became her portal to the world of extreme Islam, she said.

Two years later, in 2014, an online contact walked her through the steps of joining the Islamic State, she said: Board a flight to Turkey. When you land, call this number.

Muthana said she was smuggled across the Syrian border in November 2014 and taken to a female dormitory, which was packed with hundreds of single women from around the world. Every day, she said, an Islamic State official roamed the dormitory carrying a list of men looking for brides.

She said that she held out for a month before acquiescing to meet Suhan Rahman, an Australian originally from Melbourne. He used the name Abu Jihad, or “Father of Jihad,” she said. They met in a room with a chaperone. After a brief conversation, he took her home.

She took the name Umm Jihad, or “Mother of Jihad”. Home alone as her husband went out to fight, she posted toxic tweets under her pseudonym. “Hats off to the mujs in Paris,” she said in one of them, using an abbreviation for “mujahedeen” on the day in 2015 when jihadis stormed the offices of Charlie Hebdo and killed 12 people at the satirical magazine.

She also urged others to join the terror organisation. “There are soooo many Aussies and Brits here but where are the Americans, wake up u cowards,” she posted.

And she used her account to help incite attacks in the West, including in the United States. “Americans wake up!” she wrote on March 15, 2015. “You have much to do while you live under our greatest enemy, enough of your sleeping! Go on drive-bys and spill all of their blood, or rent a big truck and drive all over them.”

She had barely been married three months, Muthana said, when she was at home napping and a man ran up the stairs yelling that her husband had been “martyred”. After his death, she consented to two more arranged marriages, she said. 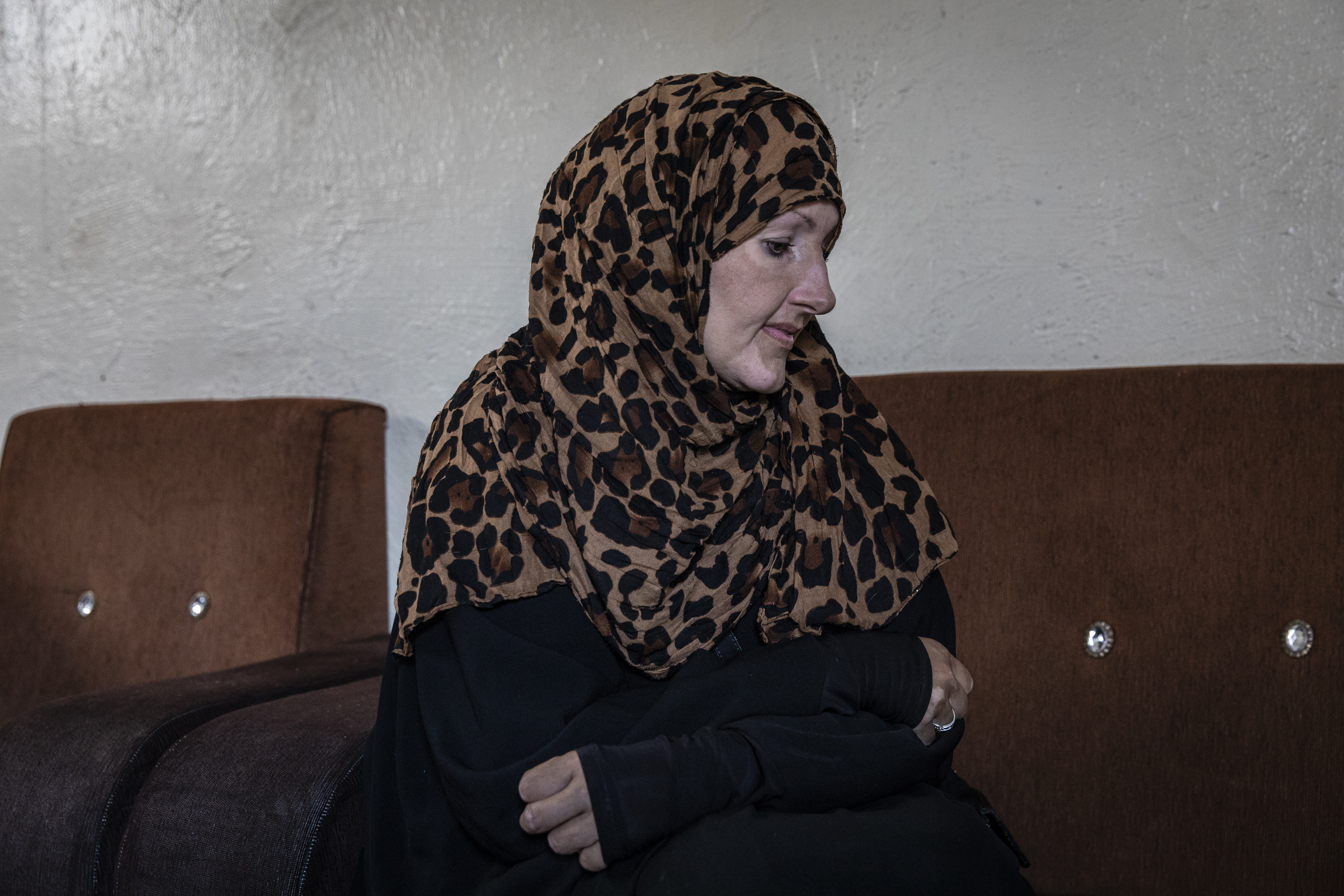 Kimberly Polman, who was born into a Mennonite community in Canada and traveled to live in the Islamic State group’s self-declared caliphate, at the Al Hawl detention camp in Syria.
The New York Times

Polman said she was smuggled into the caliphate in early 2015, after using an American passport to fly from Vancouver to Istanbul.

She said she had recently taken an interest in nursing and had begun corresponding with a man in Syria who used the nom de guerre Abu Aymen. The man, whom she later married, told her that nursing skills were needed in the growing caliphate.

Years earlier, she had left the Reformed Mennonite faith of her childhood and converted to Islam. With nothing else to do, she said, she spent her days online, where her Facebook timeline exploded with images of Muslims dying in Syria.

Her sister said that in summer 2015, Polman left on a trip to Austria, ostensibly for two weeks. “She gave me a hug goodbye and said we’d have tea when she got back,” the sister said.

It was only after the family heard from Canadian authorities that they realised she had joined the Islamic State. At one point, the sister had not heard from Polman in six months and assumed she had been killed.

By the time Polman arrived in the caliphate, its crimes were well documented, including beheading journalists, enslaving and systematically raping women from the Yazidi minority and burning prisoners alive. Both she and Muthana were evasive when asked about that brutality.

“I’m not interested in bloodshed, and I didn’t know what to believe,” Polman said. “These are videos on YouTube. What’s real? What’s not real?”


Once I look back on it, I can’t stress how much of a crazy idea it was. I can’t believe it. I ruined my life. I ruined my future.
- Kimberly Gwen Polman


In her telling, Muthana began to pull away from the terrorist group in her second year in the caliphate. She was married to a second fighter and was pregnant. Anemic from an iron deficiency, she spent much of her time in bed.

“I started having doubts,” she said in an account that The Times could not verify. “I was pregnant. Very emotional, because I missed my family,” she said. “I thought — what am I doing?”

Her second husband was killed in Mosul, Iraq, she said. “Either a missile or an airstrike,” she said.

By then it was 2017, and the siege of Raqqa, Syria, had begun. When her water broke, she walked more than a mile at night to reach the nearest clinic as bombs fell on the city, she said.

After giving birth to a son, Muthana moved from house to house, chasing the shrinking shadow of the caliphate. When Raqqa fell in late 2017, she moved to Mayadeen, along the Euphrates River Valley. When Mayadeen fell, she moved to Hajin, and from there to Shafa, a village in the last sliver of the Islamic State’s territory. Hundreds of airstrikes hammered the area.

She married a third time and sometime after, she divorced her husband, whom she declined to name.


I started having doubts. I was pregnant. Very emotional, because I missed my family. I thought — what am I doing?
- Hoda Muthana


Polman said her break with the caliphate came more violently, just a year after her arrival. She claims that she tried to escape but was spotted by Islamic State intelligence agents as she approached a woman about finding a smuggler at the market. She was imprisoned in a jail cell in Raqqa, she said, where she spent so much time that she eventually counted all 4,422 tiles.

She was repeatedly taken out of her cell and interrogated, she said. One night, she said, she was gang-raped.

“They took me down the hallway, and it was really dark,” she said. “There were metal doors, heavy ones, and I slipped, I remember, and they kicked me.”

She said the guards warned her that if she ever reported the rapes, they would say they had evidence that she was a spy. Before releasing her, she said, they had her sign a statement in both Arabic and English stating that if she tried to run away again, she accepted the “hukm,” or Shariah judgment, of death.

The two women, a generation apart, met and befriended each other in the final pocket of the caliphate, which by January consisted of less than 6 square miles.

They began talking about making a run for it, and they said they shared their growing horror over the choices they had made.

The Islamic State forbade anyone to leave, planting land mines and using snipers to shoot down anyone who tried. But last month, Muthana said, she decided to give it a try by latching on to a Syrian family who left Shafa at dusk.

All she took was her baby and his stroller, she said. When darkness fell, the group got lost and spent the night in the cold, she said.

The next day, January 10, she completed the journey and surrendered to American troops in the Syrian desert, who fingerprinted her.

Shamima Begum who left UK to join ISIS has given birth: Family