Of the 45 seats that go to polls on Saturday, the BJP is ahead in 22 going by 2019 Lok Sabha polls and includes three Hill seats of Darjeeling, Kurseong and Kalimpong 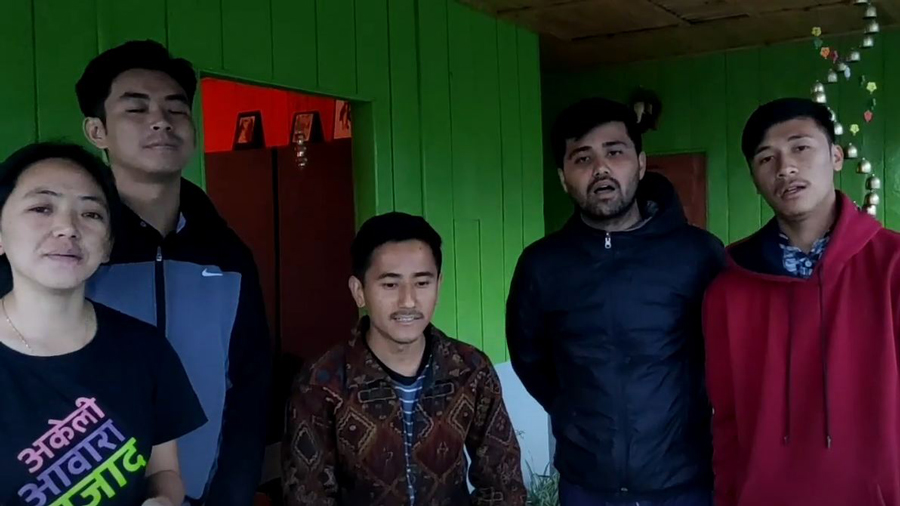 The Nepali song has been performed by Laaliguraas, meaning red rhododendrons, a socio-cultural organisation that has been at the spearhead against Fascism.
YouTube screengrab
Arnab Ganguly   |   Calcutta   |   Published 16.04.21, 11:52 PM

A day before the fifth-phase of polling in Bengal, a Bengali song that spoke out against Fascism has found an echo in the hills of Darjeeling.

“Ma katai pani jaadina, yahi desh mai basnechhu (I won’t go anywhere else, I will live in this country),” says the Nepali song, almost literally translating the Bengali song in Nepali, and also sharing the visuals from the original. The Bengali song “Nijeder mote nijeder gaan (Our views, our songs)" speaking out against the politics of hatred had created a flutter.

In the Bengali version, Rabindranath Tagore’s 1923 play Raktakarabi (Red Oleanders) inarguably his strongest protest against authoritarianism and exploitation, had featured prominently.  The Nepali version has been performed by Laaliguraas, meaning red rhododendrons, a socio-cultural organisation that has been at the spearhead against Fascism.

Some of the most prominent faces from Bengali cinema, theatre and music like Rudraprasad Sengupta, Sabyasachi Chakraborty, Parambrata Chatterjee, Anirban Bhattacharya, Suman Mukhopadhyay, Anupam Roy and others had participated in the Bengali song. The Nepali version was performed by artistes from the tea gardens of Darjeeling and Kurseong.

On Thursday, the Laliguraas members trekked five kms from Sonada till Maragaret Hope Tea Garden where at the residence of a member Prasidh, the song was recorded. After processing the video footage through the night, the song—an abridged version of the original—was released on Friday morning.

Of the 45 seats that go to polls on Saturday, the BJP is ahead in 22 going by the 2019 Lok Sabha polls. This includes the three Hill seats of Darjeeling, Kurseong and Kalimpong.

For over three decades, since the days of Subhash Ghising and later his protégé turned bete noire Bimal Gurung, the diktat of the hill outfit has writ large on the voters in these three constituencies. The BJP could get outsiders like the late Jaswant Singh and the current Raju Bista elected to the Parliament riding on the Gorkha votes.

This time, however, the Hills are a divided lot with Gurung and another faction of the GJM led by Binay Tamang backing Mamata, while the GNLF is with the BJP, making a split in the votes inevitable. Even with both factions of the GJM backing her, the sailing may not be smooth for the Bengal chief minister.

The fifth phase of polling will be held exactly a week from the blood-spilled fourth phase when five villagers in Cooch Behar’s Sitalkuchi were killed in two separate incidents. The campaign for the fifth phase which ended on Wednesday has been one of the most acerbic ones, with both the Trinamul and the BJP hurling invectives. Chief minister Mamata Banerjee and the BJP state president Dilip Ghosh, both were banned for 24-hours in this week.

The fifth phase also comes at a time when the Covid pandemic has reached alarming proportions in Bengal along with several other states.

In this phase, Mamata’s Trinamul Congress is ahead in 23 of the seats mostly in the south Bengal districts of North 24-Parganas and Burdwan. Both the parties need to hold on to their strongholds while looking to gain from the other. A task easier said than done.

Like in the north, where the Trinamul has been on a downward slide, in the southern constituencies too the party is facing uncomfortable questions especially on corruption during the Amphan cyclone relief.