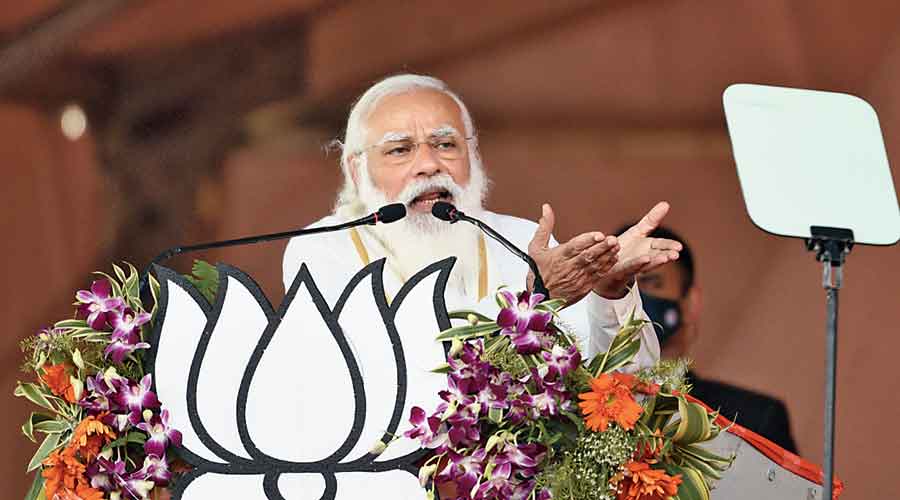 Prime Minister Na­rendra Modi on Monday tore into the Mamata Ba­nerjee government for an alleged delay in implementing the Jal Jeevan Mission, a project to give pipeline-based water supply to rural households.

Modi’s attack is an indication of how such “delay” in the implementation of central schemes would increasingly become a key poll plank for the BJP in the Assembly elections.

At a BJP rally in Hooghly’s Sahaganj, Modi said the Centre had given over Rs 1,700 crore to the Bengal government for the pipeline-based water supply initiative to 1.75 crore rural households in the state, but only Rs 609 crore of the amount was spent.

“The remaining Rs 1,100 crore was suppressed…. Cou­ld those who wronged the wo­men of Bengal be forgiven? Re­al change is in order. The Trin­amul government does not sp­are a thought for Bengal’s wo­m­en,” said the Prime Minister.

Modi said it was astonishing to note that 1.5-2 crore ho­useholds in the state did not get piped water. He claimed his government decided that the deprived households wo­uld be prioritised.

“But, despite repeated pr­o­ds to the government here, it was possible to ensure such supply for barely 9 lakh households,” he added.

Sources in the state’s public health engineering department said the annual target was to give pipeline connections to 55,58,388 rural households by March 31 this year.

He said the scheme’s pro­gress was hit hard because of the Covid-19 pandemic as villagers did not allow engineers of the department to enter their areas till around October last year, apprehending the sp­read of the novel coronavirus.

“Moreover, the state’s wa­t­er supply schemes were not pl­a­nned for household connections. Once the state joined the central project last year, we had to change the plan from setting up of roadside taps to household connections. This takes some time and it requi­res acquisition of land for boosting centres, wh­ich is also a time consuming process,” said another official.

He said the progress of the scheme had gained momentum in recent times as majority of the problems had been resolved.

“We gave 9,358 connections across the state on Sunday. If the progress could be maintained, it is expected that we would be able to give 5 lakh more connections by March 31 and we can supply piped water to over 70 lakh homes next year,” said an engineer.

Officials said if the pace was kept, the state could meet the target of giving pipeline connections to all rural households in Bengal by 2023-24.

“So, it is too early to be critical of the progress,” the official added.

Raising the issue at a public meeting by Modi, the sou­rces said, was more a political issue than an administrative affair.

“It is clear the Centre would try and attack the state government on central sch­emes. The Prime Minister brought up the issue at a public meeting for the first time apparently after the BJP realised that campaigning over non-implementation of Ayushman Bharat was not working here,” said another official.

He said the non-implementation of Ayushman Bharat would not affect the people of Bengal as the state government had brought all 10 crore people under Swasthya Sathi, a health assurance scheme that ensures free treatment of up to Rs 5 lakh for each family.

Moreover, attack over non-implementation of PM-Kisan scheme was also blunted after the chief minister agreed to join the scheme by verifying 22 lakh farmers’ applications for the central dole.

Trinamul attributed the new line of attack to the BJP’s “fear”. Its Rajya Sabha member Sukhendu Sekhar Ray said Modi and the BJP had realised that breaching Mamata’s Bengal bastion would be easier said than done and that’s why “baseless” attacks would be necessary to keep the saffron campaign afloat.

“The financial year is yet to be finished and work took off on a war-footing after the Co­vid-19 scare relatively subsi­ded. Whatever delays there ha­ve been, have been there for the entire country,” he said.

“But they will only come forward with such claims regarding Bengal, staying silent on the BJP-ruled states.”

“In my 53-year career in politics, I have never seen a Prime Minister or a Union home minister (Amit Shah) who makes such rubbish claims in public, simply for the sake of winning an election, by hook or by crook…. The people of Bengal are much wiser than the saffron camp gives them credit for,” added Ray.