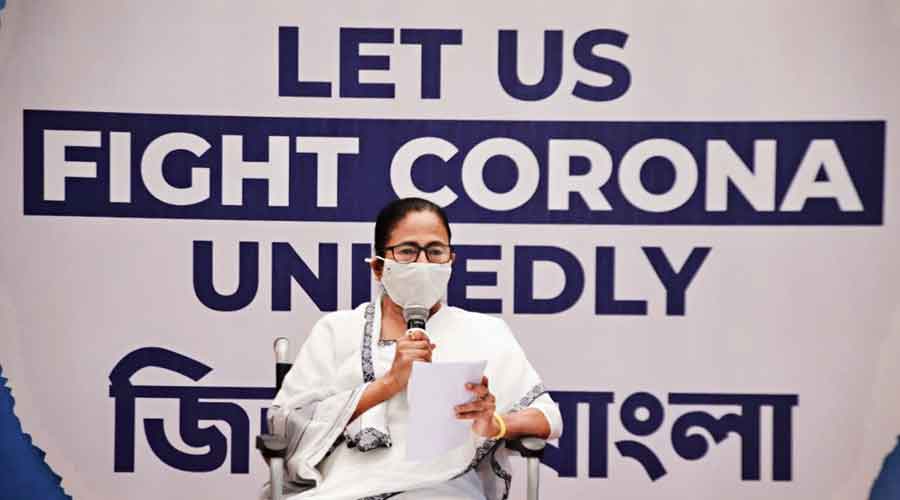 Mamata speaks to the media in Durgapur on Friday
Pictures by Swapna Barua and Munshi Muklesur Rahaman
Abhijeet Chatterjee   |   Durgapur   |   Published 24.04.21, 12:53 AM

Mamata Banerjee on Friday accused the Narendra Modi dispensation of meting out step-motherly treatment to Bengal amid the second wave of Covid-19, alleging the Centre was rerouting oxygen meant for her state to the BJP-ruled ones, before asking why funds for free and universal immunisation could not be spared by the Union government.

“The Centre suddenly stopped our supply chain of oxygen cylinders and asked SAIL to send them to Uttar Pradesh… BJP-ruled states… yet another instance of step-motherly treatment, even now. I have strongly objected to this and has written to the Prime Minister in this regard,” the chief minister said at a news conference in Durgapur.

Mamata’s fulmination was meant to keep Modi in the crosshairs in her election campaign, which she has apparently been rapidly pivoting around the Centre’s “monumental failure” in the war against the pandemic.

The allegation came amid a mega crisis of oxygen cylinders across the nation amid the second wave of the novel coronavirus. The Modi government is widely being held responsible for the second wave sweeping India.

The Trinamul Congress chief said her government had barred supply of oxygen cylinders for industrial purposes and instead, had been directing them for use in the healthcare sector. “We have been trying our best to handle the crisis with our own resources. Currently, we have 20,000 cylinders. We are in the process of arranging 5,000 more,” she said.

Mamata said she would have participated in the meeting Modi had held with chief ministers on Friday if she had been invited. “I came to know that today the Prime Minister is holding a meeting on the Covid-19 situation, but they did not invite us. We could have raised our issues had we been invited,” she said.

Mamata lambasted Modi and others in his cabinet for being in denial of the pandemic’s ground realities ahead of the second wave, thereby allowing it to blow up over the past few weeks.

She said the Centre, according to her estimates, could have provided for free Covid-19 vaccination for every citizen by allocating Rs 20,000 crore, but it did not do so.

“When you (the BJP) have spent hundreds of crores for booking hotels, guest houses, chartered flights and choppers, spent countless crores offering cash to voters, for winning Bengal… could you not have spent Rs 20,000 crore for the health and well-being of every Indian in the pandemic?” asked the chief minister.

“You spend thousands of crores building statues…. Countless billions were deposited in your PM-Cares Fund, opaque and beyond audit…. Could money from that fund not have been utilised for free, universal vaccination of citizens?” she asked.

Over the past week or so, the pandemic has taken centre stage at all public programmes of Mamata, who seems to have quickly realised how the election in Bengal now could be won and lost over the pandemic as the core issue.

Sections within the BJP state unit admitted apprehensions over how the perception battle was being rapidly lost amid the Bengal elections over the past week or so as the Centre’s failures in the face of the raging second wave kept getting increasingly exposed.

“All we do is respond with feeble whataboutery or lavish praise on the Prime Minister,” said a BJP functionary on the condition of anonymity.

third consecutive evening with attempts at eulogising Modi and lambasting Mamata for criticising the Prime Minister.