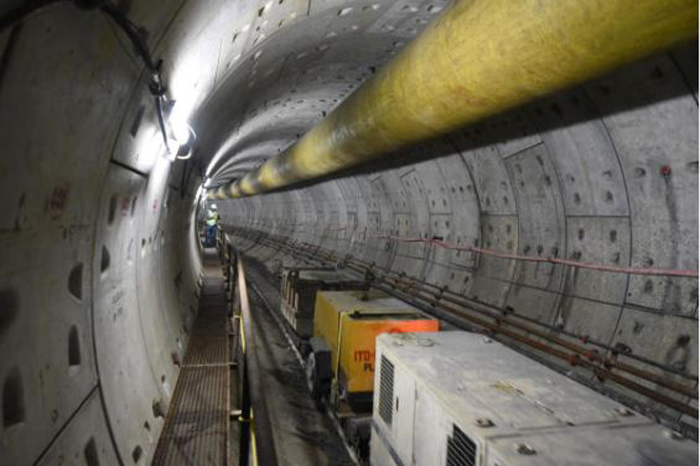 Once the spread of the affected zone is arrested, the technical team will think about ways to extricate the tunnel-boring machine that has been stuck in an East-West Metro tunnel since last Saturday
Pradip Sanyal
Subhajoy Roy   |   Calcutta   |   Published 06.09.19, 08:32 PM

Geo-technical analysts and engineers have found that the subsidence zone in Bowbazar has taken the shape of an ellipse and are trying to prevent its spread by building a concrete underground wall around it.

Once the spread of the affected zone is arrested, the technical team will think about ways to extricate the tunnel-boring machine that has been stuck in an East-West Metro tunnel since last Saturday and plan the next course of action.

The machine, which was boring the tunnel through which Howrah Maidan-bound trains of East-West Metro will run, hit a giant aquifer on Saturday afternoon. Water from the aquifer flooded the tunnel, triggering subsidence and causing severe damage to many buildings.

Till Friday afternoon, 515 people from 53 buildings in Bowbazar were evacuated. Officials of the Kolkata Metro Rail Corporation (KMRC), the implementing agency of the East-West Metro project, said 11 more buildings would be evacuated soon.

“We have not issued any fresh evacuation notice on Friday. Our immediate target is to prevent the spread of the subsidence zone, which has assumed the shape of an ellipse. We are drilling holes into the ground and injecting a mixture (of cement, sodium silicate, bentonite and water) to fill the empty space,” the KMRC official said.

The mixture can gel very quickly.

“A vertical or a slightly leaning wall of concrete will be built underground using the mixture. This wall is being built along the edges of the affected zone. It will not allow the subsidence zone to spread laterally,” the official said.

Once the spread of the subsidence zone is arrested, he said, a number of measures will be taken to stop the settlement of soil.

A four-member team has been formed under the leadership of John Endicott, a Cambridge-educated British engineer who has been involved in boring tunnels since 1975, to deal with the crisis.

The team will meet at 9am and 6pm every day to take stock of the progress and suggest the way forward.

KMRC officials said they were no longer able to study the subsidence at the centre of the affected zone, where a house has collapsed.

“We have found 10mm subsidence at the point farthest from the centre of the affected zone, where the subsidence was found to be around 200mm,” an official said. “It is a sign of hope that the subsidence readings have come down but that doesn’t mean that it will not go up again.”

Calcutta Municipal Corporation (CMC) sources said a survey to identify all displaced persons would start soon. The survey will be conducted in the presence of representatives of the CMC, KMRC, disaster management group and police.

“The local councillor will certify the owners and tenants of the evacuated buildings,” said a CMC official.