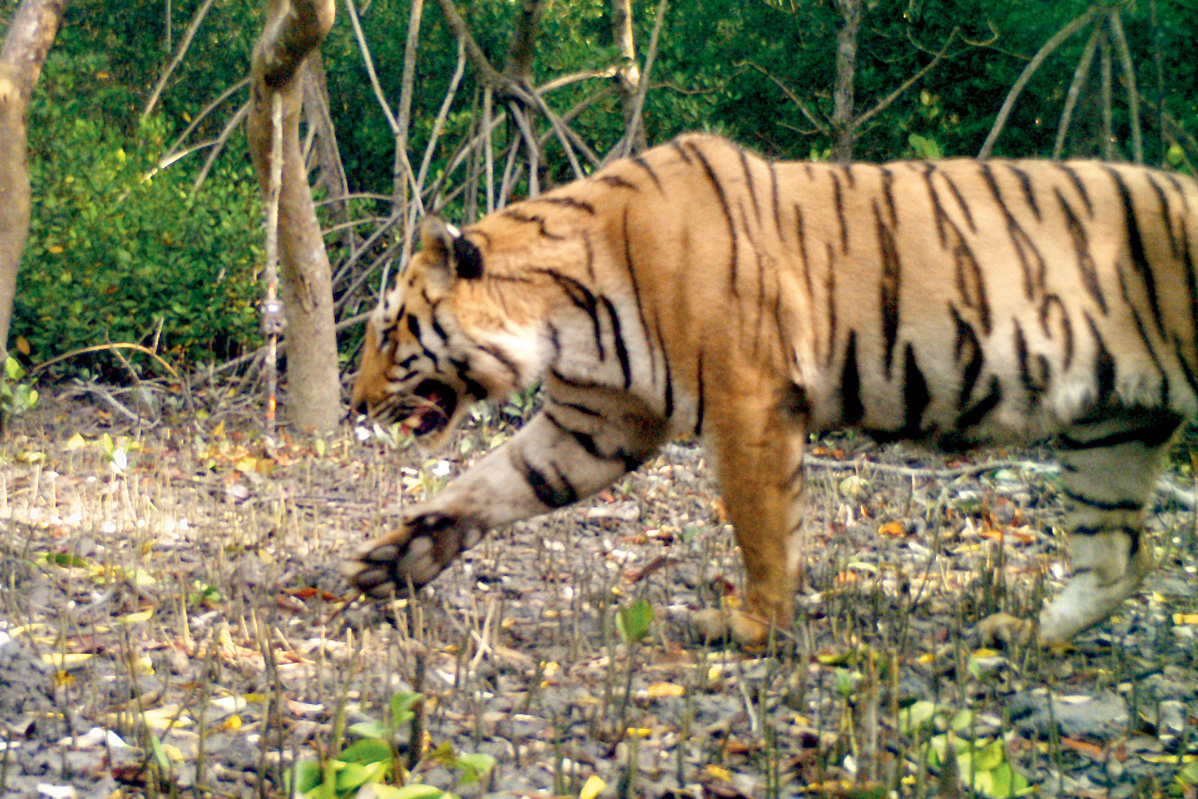 Over 400 pairs of cameras across the Sunderbans and South 24-Parganas have captured tiger images in areas that have not had any previous sighting of the big cat, suggesting a rise in the animal count.

The cameras were installed at strategic points of the western part of the national park and the Sajnekhali Range in the Sunderban Tiger Reserve and the Matla, Raidighi and Ramganga ranges in the South 24- Parganas division from November 14.

It was part of the second round of tiger census in the mangroves. The pre-monsoon phase involved 300 pairs of eyes covering the eastern part of the national park and the Basirhat Range.

The last set of the cameras installed in the second round was retrieved on December 27.

“Tigers have been captured in more than 240 grids so far. The images of the three ranges in South 24-Parganas have not been checked yet,” said Nilanjan Mallick, the field director of the Sunderbans Tiger Reserve and nodal officer for the tiger count in the Sunderbans.

The tiger reserve is divided into grids of 2sq km each.

The increase in the number of the images captured from a range does not mean the tiger population has gone up there. A tiger could have been clicked multiple times. Another might not have been clicked at all. “These are raw findings that will be scrutinised,” said Mallick.

But officials in Bengal are hopeful of a rise in the number because of the images from new areas.

“Some of the areas in the national park and the Sajnekhali Range have recorded tiger sightings for the first time,” said Mallick.

The 2014 tiger census had pegged the number of tigers in the Sunderbans at 74. According to the 2016-17 count — there is an annual individual count at all the reserves in the country — the number has gone up to 87.

The post-monsoon pictures have already been shared with scientists of the Wildlife Institute of India and officials of the National Tiger Conservation Authority. Along with the tiger pictures, images of deer, wild boars and other animals will also be analysed by researchers.

“The study of the herbivore prey base is important to find the number of tigers in an area,” said a forest department official.

The researchers are going to feed the images to a software that can identify a tiger from its stripes. “The stripes in each tiger are unique, much like fingerprint of humans,” said Y.V. Jhala, senior biologist at the Dehradun-based WII.

The cameras are placed in pairs because a tiger needs to be clicked from both flanks at the same time for a picture to be fit for analysis. The Cuddeback all-weather night-vision digital cameras have motion detectors. Animal movements activate the sensors in the cameras.

“The exercise will also use statistical models that account for tigers that have not been photographed,” said Jhala. The report should be ready by May, he added. The 2018 census had put the number of tigers in India at 2,226, up from 1,706 in 2010.

The Sunderbans are spread across 10,000sq km, a little above 4,000sq km of which is in India and the rest in Bangladesh.

The Sunderbans Tiger Reserve, one of the first nine that came into being following the launch of Project Tiger in 1973, is spread across 2,500sq km. It comprises the Sunderbans National Park, marked as the core area, and the Sajnekhali Wildlife Sanctuary and the Basirhat Range, which form the buffer zones.

Cameras were also placed across the tiger zones in South 24-Parganas, which are outside the geographical boundary of the reserve.