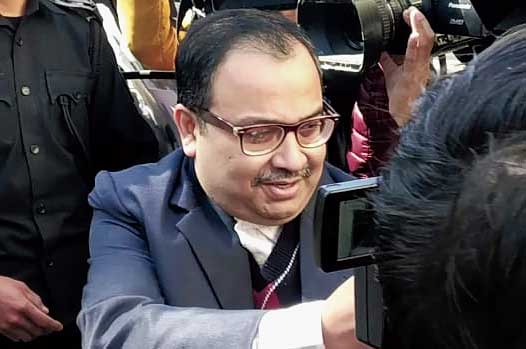 The Enforcement Directorate (ED) on Tuesday questioned Trinamul spokesperson Kunal Ghosh for five hours at its Salt Lake office in Calcutta in connection with its probe into the Saradha deposit mobilising scam.

This development came on a day the Central Bureau of Investigation (CBI) drew up a list of district magistrates who would be possibly asked to appear for questioning in connection with its probe into the multi-crore pilferage of coal across many districts of Bengal and the Union home ministry handed over the probe into the Nimtita blast in Murshidabad to the National Investigation Agency (NIA).

A team of ED officers questioned Ghosh for over five hours in trying to find out, they claimed, some of the missing links of the money trail in the Saradha scam.

A former Rajya Sabha member, Ghosh headed a television channel and a newspaper funded by the Saradha group.

Asked about the timing, ED officers said the investigating officer of the case was recently changed and the new incumbent has drawn up a list of unanswered queries which demanded Ghosh’s questioning.

Ghosh has been asked to re-appear for questioning, sources in the agency said.

Trinamul leaders said this was a characteristic trait of central agencies — dusting out old files ahead of the polls.

“Kunal (Ghosh) was recently vocal about BJP offering shelter to some of those accused in the Narada sting case and therefore made a target,” said a senior Trinamul leader.

In Delhi, the Union home ministry entrusted the NIA to probe into the February 17 Nimtita blast in Murshidabad bordering Bangladesh that left at least 26 people seriously injured, including Jakir Hossain, the minister of state for labour. However, Mamata Banerjee had immediately set up a special investigation team to probe the blast with three agencies, the CID, the Special Task Force and the Counter Insurgency Force (CIF). The CID arrested two persons. Hossain is still admitted to the SSKM hospital.

The CBI has started drawing up a list of IAS officers who served Birbhum, Murshidabad and erstwhile Burdwan between 2017 and 2020 as district magistrates, before possibly inviting them for a round of questioning in the alleged multi-crore coal pilferage case.