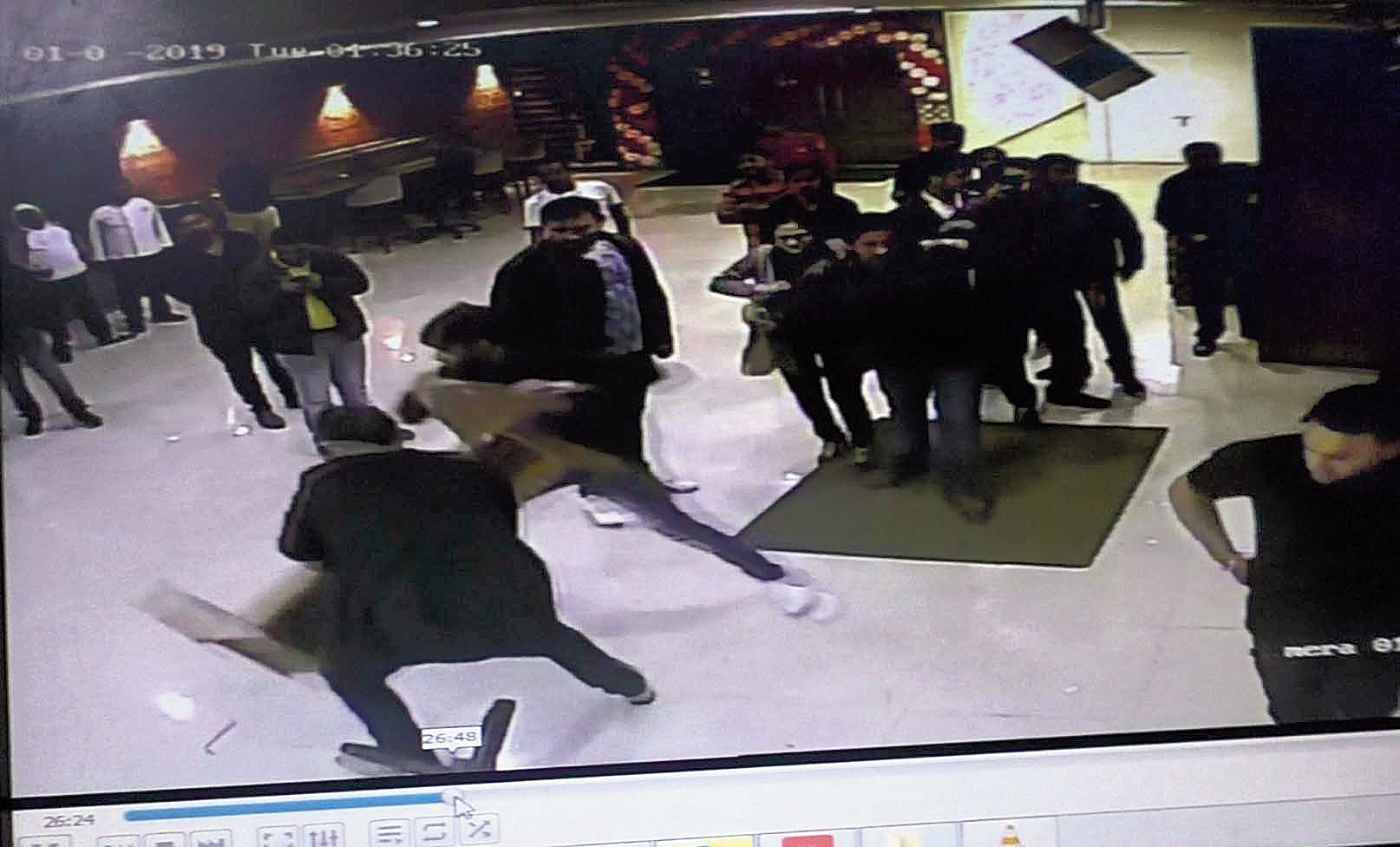 Images purportedly captured by CCTV cameras installed in a Sector V pub where a brawl broke out on New Year’s Eve show a number of men hurling glasses and hitting waiters around 1.45am, police said.

to shield themselves from attackers.

Six men were arrested for allegedly attacking employees of the pub after they had been refused drink around 15 minutes before the closing time early on Tuesday.

The six are Sumit Das and Samik Saha, residents of Bagmari near Maniktala in north Calcutta, and Varun Khamboj, Aditya Kataruka, Vivek Bansal and Shourya Gupta of Park Circus. Sumit and Samik were remanded in police custody for two days and the rest in judicial custody for seven days.

An officer of the Bidhannagar commissionerate who scanned the purported CCTV footage said that after recovering from the initial surprise of the attack, some waiters and a bouncer, led by a pub employee dressed in a brown shirt and jeans, pushed out the men and women who allegedly went on the rampage.

“The suddenness of the attack left the pub employees stunned. The guards needed several minutes to gather their wits and get into action. A waiter can be seen slumping after an empty glass landed on his head,” the officer said.

The waiters came under attack around 1.45am, when they were going around tables asking guests to finish their drinks because the pub had a licence to stay open only till 2am. The accused, from two groups, apparently lost their cool when they were told there would be no more refills.

The pub is licensed to serve drinks till 1am and close an hour later, an employee said. Some guests, however, were in no mood to listen.

The purported footage shows the trouble-makers being pushed out of the pub at least twice but they managed to return.

“A man dressed in a long black coat is seen smashing a wooden structure on the floor in the lobby while his friend, dressed in a grey jacket, tried to pacify him,” the officer said.

Four employees of the pub were critically injured. One of them needed 14 stitches to close a gash caused by broken glass and another suffered a fracture in an arm.

Another officer of the commissionerate said they would speak to the employees on Thursday. “We had once spoken to them on the night of the brawl,” the officer said.

“The cameras have caught at least five other men who were milling around in the bar and watching the fight. We are trying to identify them. We are also trying to find out whether any other man was involved in the brawl,” said the officer.

Vikas Parasrampuria, an official of the pub, said they had spoken to relatives of the accused and “explained to them that the trouble broke out because we had to comply with the rules”. On Wednesday, the bar opened at noon and closed at 11.45pm.