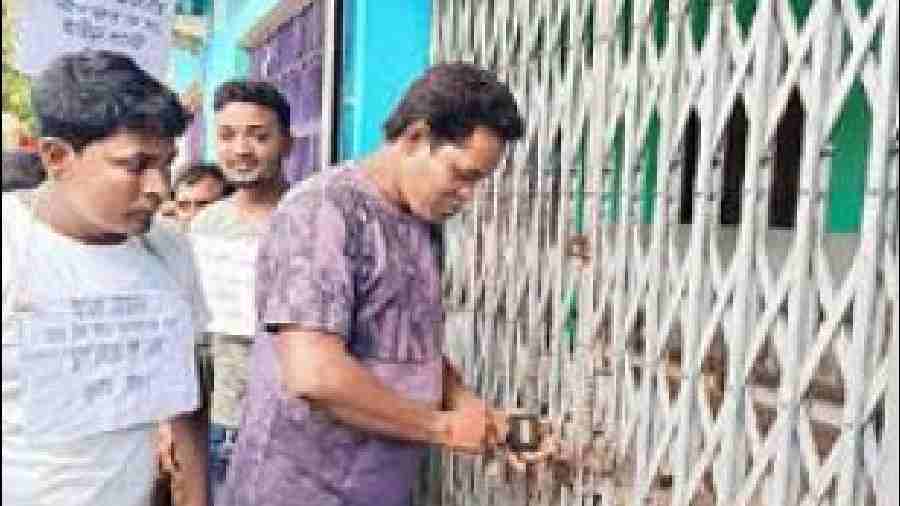 A villager locks up the Chapali gram panchayat office on Wednesday.
Picture by Pashupati Das
Subhasish Chaudhuri   |   Calcutta   |   Published 25.08.22, 02:07 AM

The clamour for police probe against gram panchayat functionaries is growing louder across the state with the state government recently asking district magistrates to lodge FIRs for misappropriation of funds under the MGNREGA 100 days’ job scheme.

The Centre froze funds in March and advised Bengal to recover the embezzled sums.

On Wednesday, a large number residents in Chapali village of Minakha in North 24-Parganas blocked an arterial road that connects Basirhat for about two hours and locked the local gram panchayat office, demanding police action against panchayat functionaries for “corruption” in the 100 days job scheme and rural housing scheme.

Many Trinamul supporters also joined the protest. The blockade was lifted after the joint BDO promised action.

Salauddin Mollah, a protester, said: “Money was withdrawn as wages under 100 days' job scheme by producing fake documents when projects were not executed. People were forced to pay bribes even after allotment of homes. Complaints were lodged with the Basirhat SDO and block nodal officers of the schemes, but they did nothing.”

Abdul Gaffar Tarafadar, a local Trinamul leader, echoed the allegations. “People have genuine grounds for resentment. We want the district administration to conduct an inquiry immediately and lodge an FIR,” he added.

Minakha block development officer Seikh Kamrul Islam did not respond to calls. An officer of 100 days job scheme cell said: “We have received the complaints and physical verification will be done shortly.”

Basirhat SDO Mousam Mukherjee said he was unaware of complaints against the panchayat.

Last week, residents in Gangasagar of South 24-Parganas staged a demonstration against gram panchayat authorities and demanded police action. Around the same time, Nadia district administration lodged an FIR against the pradhan of Trinamul-ruled Betai-2 gram panchayat and 13 of its functionaries for alleged embezzlement of Rs 1.69 lakh under the MGNREGA scheme since 2018. The FIR was lodged after an inquiry found that villagers’ complaints of corruption were genuine. Sanjit Poddar, Trinamul leader and panchayat pradhan, is absconding.