Reduction in the use of plastic promotion 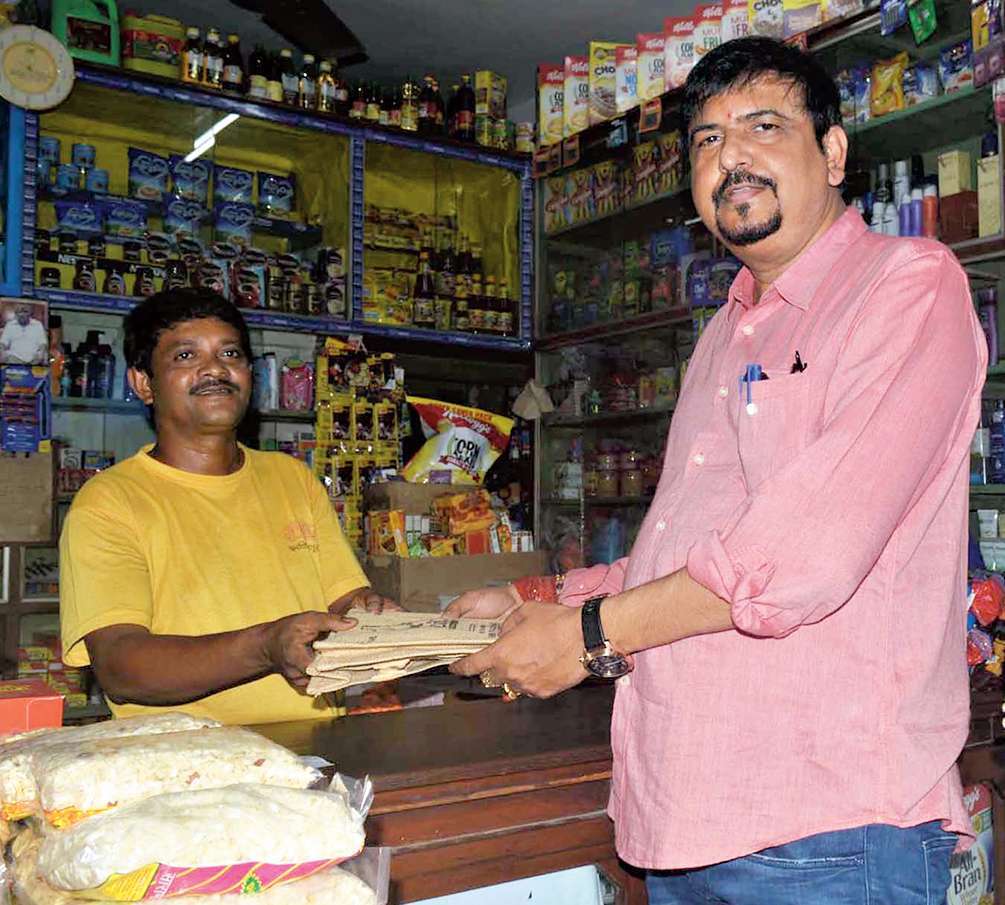 MLA Sujit Bose hands over jute bags to a shopkeeper in CA Market after the event on Sunday. The corporation plans to impose fines on shopkeepers for plastic use after the Pujas.
Picture by Debasmita Bhattacharya
Brinda Sarkar   |   Calcutta   |   Published 19.09.19, 09:38 PM

CA Market may soon get a machine that will help break down plastic bottles to small bits and make them easier to be recycled. Mayor-in-council in charge of education and local councillor Rajesh Chirimar made the announcement outside the market on September 15 at an event to promote reduction in the use of plastic.

“We shall try to install a plastic reverse vending machine at the main gate of CA Market before the Pujas,” said Chirimar. “If people insert used plastic bottles in it, the machine breaks it down to plastic chips. They can later be sold at up to Rs 35 per kg to recyclers.”

The councillor plans to invite MLA Sujit Bose to inaugurate the machine before the Pujas and, if successful, will install another such machine near Hariyana Vidya Mandir in BA Block.

The event was attended by MLA Bose, mayor Krishna Chakraborty and a host of other councillors. “We are distributing 6,000 jute and non-woven synthetic bags to shopkeepers today and in the coming days to households in the ward,” said Chirimar. “The idea is to make a habit of not using plastic and after the Pujas we shall impose fines on shopkeepers who continue to use plastic.”

The mayor emphasised on how plastic bags choke drains. “This monsoon, our workers pulled out sacks-ful of plastics from the streets. We are not here today to complain but to create awareness about a practice which is deadly for all of us,” said Chakraborty.

Mayor-in-council in charge of solid waste management Devashis Jana spoke about how the National Green Tribunal had ordered the corporation to stop dumping waste at Mollar Bheri, behind Sector V, after April 2020. “To achieve that we will have to segregate our garbage at source and recycle everything.”

The corporation had previously set an August 14 deadline for starting waste segregation in Salt Lake, as reported in The Telegraph Salt Lake on June 28, but failed to meet that. Chirimar said the revised deadline was September 30. “For that, the corporation will be giving out two bins — green and blue — to residents to dump organic and dry waste,” he said.

MLA Sujit Bose asked residents to comply with the rules to be imposed and asked them to revive the habit of going to the market, bag in hand.

In the audience, Soma Mitra of BA Block was upbeat. “I’ve given up using plastic ever since my father-in-law succumbed to cancer in 2013,” said. “This is a cause close to my heart so even though I have a lot of work on Sunday mornings, I made it a point to attend this event.”

Kartik Das, who sells fried snacks at the market, says he is used to packing food in paper parcels and plastic bags. “But I can try giving them in these jute bags now,” he said. Mihir Mondal, a fish monger, gives fish in tissue-like bags now. “I switched to these after the authorities told us to give up plastic bags. These bags are good but they get wet easily. The problem will persist if I put them in jute bags,” he said.

Jhumpa Karmakar, a DA Block resident who came shopping for fish, had a suggestion. “Previously they used to handover fish and meat in stapled sal leaves. They were effective and eco-friendly but aren’t seen anymore,” she said.