Pained by pack-off threat by minister 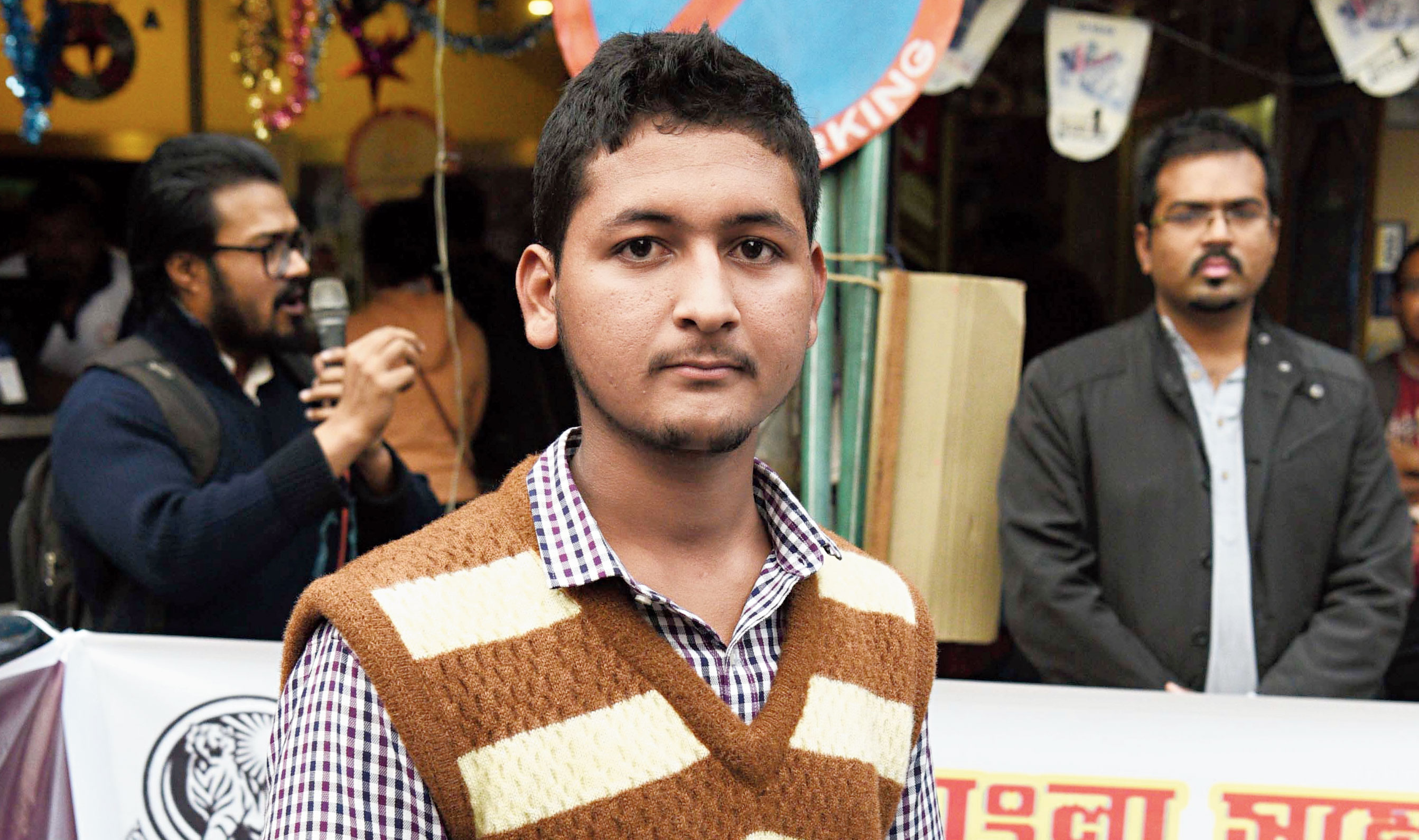 At 19, Mustafiur Rahaman has become the first Indian to be told in writing what many fear awaits them once the rewired citizenship regime kicks in.

No less a person than Union minister of state for environment Babul Supriyo has been accused of informing the college student over Facebook: “Mustafiur Rahaman aage tomaye tomar deshe pherot pathai tarpor post-card ye jobaab debo (Let me first pack you off to your country, then I will respond through postcard).”

The minister signed off with an LOL (laughing out aloud) emoji that sheds tears of joy.

The comments were part of an online exchange over a decision by a Jadavpur University student to tear up a copy of the Citizenship (Amendment) Bill at the convocation on the same day.

On Thursday, this reporter saw Mustafiur outside Jadavpur University. He was at the 8B bus stand to be part of a gathering called by the Jatiyo Bangla Sammelan to protest the minister’s threat to Mustafiur.

Mustafiur told The Telegraph: “I felt a sense of pain (bedona) and sadness (dukkha) reading what he had to say. But I was feeling even more helpless. A Union minister was threatening a small person like me because of my name. He wants to send me to Pakistan because for people like him, Muslims have only two places: Pakistan or Kabristan.”

Mustafiur is a farmer’s son, youngest among four siblings. He scored over 75 per cent in his state higher secondary exams and is a student of chemistry honours at Krishna Chandra College at Hetampur in Birbhum.

“Never have I thought of living in any other country. Never did I think I could be thrown out of my own country…. But the fear is real now,” the teenager said.

His parents were so worried after what he did that they had asked him to apologise and reconcile with the minister. “Can you ever take him on?” his father had said.

Mustafiur did not apologise, even after his parents recalled the plight of the mother of a college student in Burdwan. A group had gone to the Burdwan home and warned of “action” against her son for a confrontation with Supriyo at JU in September.

On Thursday, Mustafiur said: “I have done no wrong. So many people are showing solidarity with me. I cannot let them down.”

He had replied to the Union minister on December 24:

“Babul Supriyo aamar jatheshto proman achhe je aami bharotiyo ar bangali. Aapni bangalider samman korte janen na aar banglar MP (Babul Supriyo, I have enough proof to show I am an Indian and a Bengali. You don’t know how to respect Bengalis but you are an MP from Bengal).”

Asked for comment on Thursday, Union minister Supriyo said: “This is my Facebook account and if someone uses abusive language on my wall as a serial offender, whoever he is, I will not spare him. If someone hurls hundred bricks at you, then he has to face consequences. My courteousness is not my weakness.”

Supriyo added: “Whatever I have said was directed at him. I did not target any community. It is exactly directed at an individual. People who are connecting it with a religion are doing it with their dirty and vested political interests. Anyone who reads that (the message), it was written with a pinch of salt. Instead of abusing back at someone which I never do, I wrote it with a little bit of taste of humour. I also added a smiley. I don’t need to give my explanation to anyone. I would just tell these people to concentrate on their studies.”

Not everyone agrees with the minister’s interpretation of the “smiley”. The Guardian newspaper of the UK had published an opinion piece on the political significance of emoji in 2016, saying “the ‘tears of joy’ emoji is the worst of all — it’s used to gloat about human suffering…. The cackling grin and tears of mirth are the mockers’ attempt to tell us that, in a world full of human suffering, their brand of callous disregard is winning.”

Responding to the minister’s allegations, Mustafiur said: “I have never abused the minister. I have only criticised him. Let him show that I have ever abused him.”

Mustafiur explained why he had raised questions about the minister’s education. “Because Babulda had raised questions about the academic qualifications of a JU student who accepted her MA degree and the gold medal at the university’s annual convocation and tore up a copy of the Citizenship (Amendment) Bill. I found his reaction offensive and therefore took on the minister.”