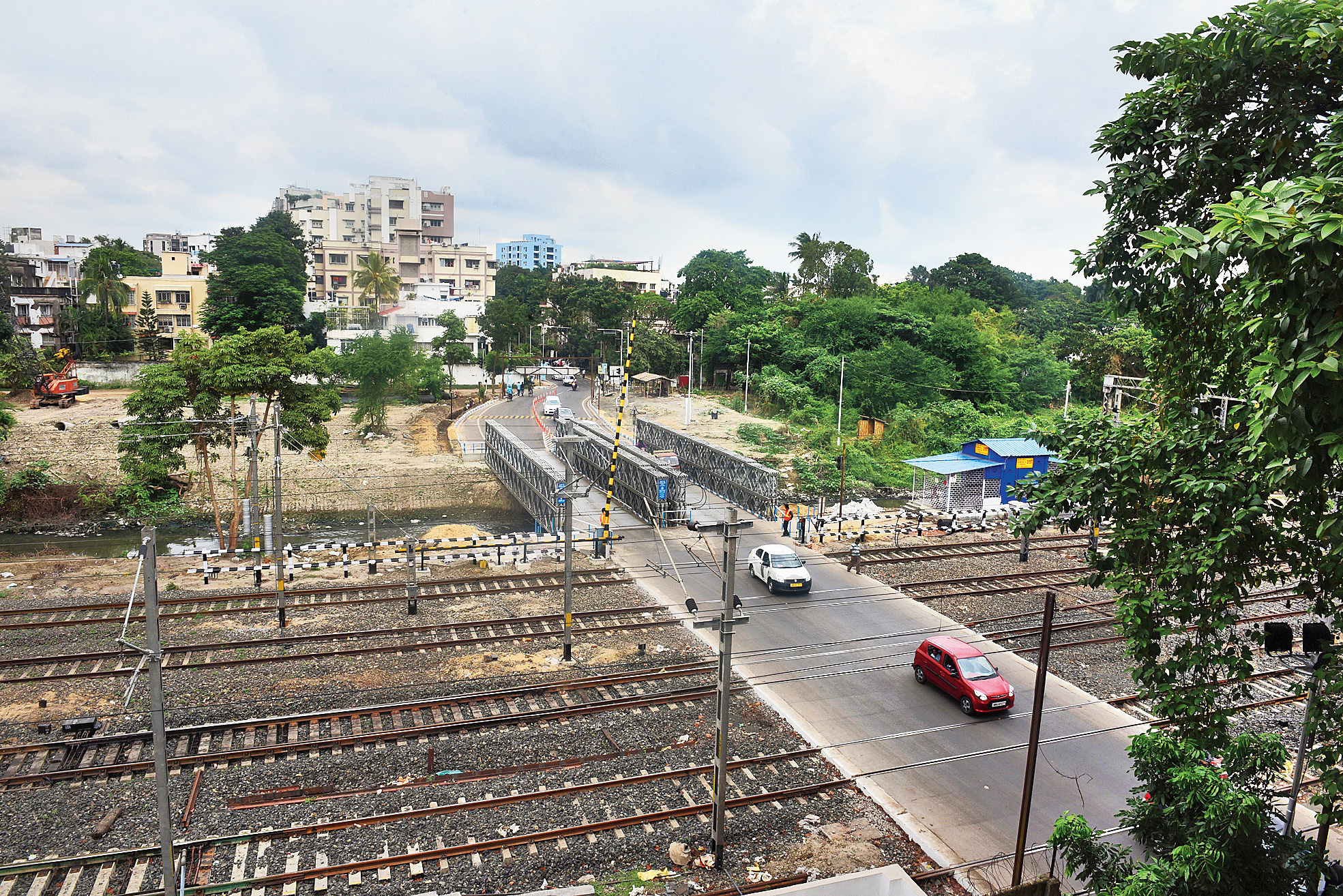 Vehicles going towards New Alipore from the heart of the city cross the twin Bailey bridges on Tuesday afternoon after one-way traffic in that direction opened at 1pm.
Sanjoy Chattopadhyaya
Debraj Mitra And Kinsuk Basu   |   Calcutta   |   Published 30.10.18, 09:26 PM

The pain of a long commute from central Calcutta to neighbourhoods like Taratala and Behala eased on Tuesday afternoon after the twin Bailey structures that provide an alternative to the fallen Majerhat bridge were opened to New Alipore-bound cars and two-wheelers at 1pm.

One-way traffic in that direction lasted till the pattern reversed at 10pm.

From 10pm till 1pm on Wednesday, the bridges will be open to Alipore-bound traffic, like it has been since October 12.

One-way movement in two halves of the day-night cycle is here to stay, according to traffic police officers.

The traffic-reversal plan passed the test on its debut, reducing the time needed for a commute between central Calcutta and New Alipore, Taratala and Behala. “The morning rush is from that side of town towards central and north Calcutta. The evening rush is towards New Alipore and Behala. Traffic reversal for this route has been decided accordingly,” a senior officer said.

Between 1pm and 10pm, the change not only proved helpful for motorists headed home from work in the evening but also benefited children returning from school in the afternoon.

Around 2.40pm, the trail of cars on Alipore Road was considerably shorter than it had been in the past. “The traffic tail usually reaches National Library from the Burdwan Road crossing, which is a distance of almost 2km,” said a sergeant managing traffic at the intersection.

When a school at the crossing of Alipore Road and Chetla Central Road gives over (classes V to XII) around 2.30pm, the resultant traffic congestion in that area means getting stuck on Alipore Road for 20 to 30 minutes.

Till Monday, the only option for motorists going towards Behala had been to turn left from the Alipore SBI crossing and enter a snarl on Alipore Road. The next afternoon, Behala-bound cars had the option of going straight from the crossing to hit Alipore Park Road and Raja Santosh Road to reach the twin Bailey bridges.

Alipore Park Road and Raja Santosh Road are narrower compared to Alipore Road, but the average time needed to reach New Alipore from Alipore Road via the Bailey bridges was less than 10 minutes in the afternoon compared to around 40 minutes until Monday.

Alipore Road has signage to inform motorists about the traffic tweaks, but many people still appeared unsure about the route on the first day. A police team deployed at the intersection guided the confused motorists.

Traffic load did increase in the evening but the route was still better than the one in use since the Majerhat bridge collapsed.

Chayan Mitra, who lives at Pathakpara in Behala and works in an office on Camac Street, took one-and-a-half hours to reach home the previous evening. Tuesday cut his commute by half an hour.