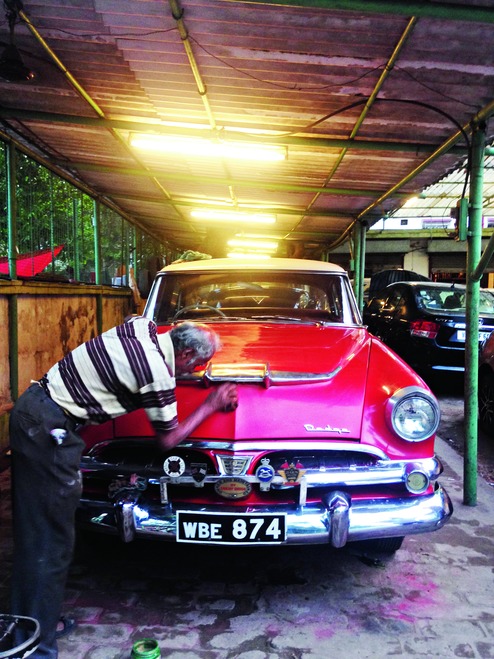 If restorers are car doctors, then we are in a surgical ward - a garage for vintage cars in south Calcutta. Three men are working on the doors of a Pontiac Silver Streak 1947 - Marilyn Monroe owned a 1951 model - another group is huddled over its dismantled engine. The man who helms this operation is fittingly called Toy da. His other, more formal, name is Indrajit Banerjee.

The term "vintage car" is used loosely today. And by vintage car restorers, we actually refer to someone restoring any old car. But going strictly by car parlance, all pre-World War I cars, up to 1914, are considered Edwardian or veteran; cars manufactured between 1914 and 1939 are vintage and those between 1940 and 1970 are classics.

Old cars are toys of the elite. Alongside status, they also say something about the owner's taste and sense of history. And car rallies help showcase all of this.

Banerjee tells us how every year it is the same story. A month or two before the scheduled winter rallies, car owners call him up, asking him to fix their grand old toys. But catwalk done, the car is pushed inside the garage and there it stays until the next year, the next rally. Says Banerjee, "It messes up the car."

Banerjee says restoring a vintage car is as much about mechanics, as it is about history. "There is repair work involved and also research." Young entrepreneur and antiquarian Souvik Ghose Chaudhuri agrees with Banerjee. He had to let go of his first purchase - a classic Dodge Kingsway 1955 - only because he could not find a car doctor. "I got it cheap, so I thought I would do it up. In time, I realised that restoring cars is not everyone's cup of tea and I sold it."

Calcutta being the erstwhile capital of the Raj and, thereafter, the city of a gentry styled after the Raj, always had a neat collection of wheels. That collection might be depleted, but even then there are to be found here a lot of diamonds, albeit, many of them gathering serious litigation dust. Banerjee talks about a Delaunay Belleville, a Standard Coventry used by the Prince of Wales during his visit to India, a horde of Rolls Royces ranging from Silver Ghosts to Phantom IIIs, Minerva, Mercedes Supercharger, Humberette, Steam Truck... all of which he has had occasion to find right here, in this very city.

He says, "I have a client who has a 1947 Plymouth that belonged to singer Hemanta Mukherjee. The car was lying idle for 35 years. It took me a year-and-a-half to restore."

The Ghoshes - Sanjay and Rajib - have been in the car restoration business for 46 years now. Rajib brings out an album and starts flipping the pages. "This one is a Rolls Royce Silver Wraith that once belonged to Lord Mountbatten. When we got it, it had no meter, seats, dashboard, nothing. The woodwork had gone for a toss. It took us four months to restore it," he says.

According to the Ghoshes, there is no profit in restoration, only passion. Banerjee agrees, "You have to be lunatic to work on vintage cars. I would have only been into modern cars otherwise, which is easier work, less workload, lot of money."

And it is all very labour-intensive. Between the Ghoshes and Banerjee, you learn that the new lot of mechanics are mostly fitters - removing defective parts, replacing them with whatever they are told to, not bothering to investigate the root cause of the defect and how the system works and where it has failed. "A restorer will typically guide his mechanics, but the mechanics too must have an interest," says Banerjee.

Often, the degree of restoration work will depend on the owner's inputs. In the case of the 1947 Plymouth, says Banerjee, the new owner insisted on retaining the original detailing right down to keeping the original 6 volt electrical system - a difficult task given the lack of availability of spares. The car has since then gone on to win the Runners Up Trophy in the Classic Cars Best Restoration Category at a 2017 car rally.

But rallies are waning in popularity. Instead, the flavour of the season seems to be drives. Chaudhuri, along with two others, has started a group called the Classic Drivers of Calcutta (CDC). He says, "So once in a fortnight or a month, we organise these drives.The idea is to keep the old cars on the roads."

Says Rajib, who is also part of the CDC, "Bombay and Delhi thrive on such clubs. This is the first time something like this is happening in Calcutta for vintage cars. It is a friendly drive instead of a competition and a good excuse to keep the car running."

The old wheels are turning for sure.