Old mansion with new look for tourists in Bengal

The Daw family mansion is spread over 8 bighas on the Hooghly, including a 5-bigha temple-cum-ghat in the middle 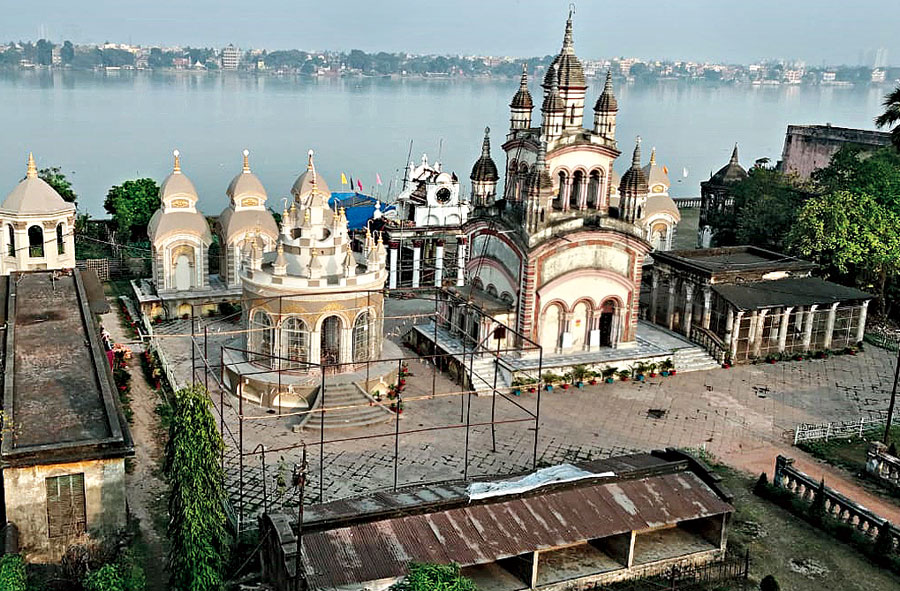 In yet another marriage of conservation and tourism, a beautiful riverfront property close to Belur Math, belonging to the Daw family of Jorasanko, has been renovated as a homestay for tourists.

The Daw family Rasbari is spread over eight bighas on the Hooghly, including a five-bigha temple-cum-ghat in the middle.

“The temple complex was built by my ancestor Purnachandra Daw who had promised his mother to atone for past profligacies,” said Atanu Daw, a member of the sixth generation of the family since then. An inscription on the steps of the RadharamanJeu temple indicates the foundation date to have been in June 1890. In front of the nabaratna or nine pinnacle temple, stand six Shiva temples, in the atchala style. At the centre of the row of temples, with three each on either flank, is a ghat supported by Corinthian columns with a clock atop.

The steps in front are gated at the water level and get partially submerged during high tide. All the temples have been renovated, while work is underway on the ghat. One can hire a boat and set off on a trip from here.

The two structures that have been renovated to house tourists are to the left of the temple. One is two-storeyed with a first-floor verandah and the other an elevated single-storeyed one. There are two double-bed rooms each on two floors and a couple of four-bed rooms in the single-storeyed structure. Baths have been attached to the rooms as part of the renovation. Bheslana marbles are being laid on the floors. “We have tried to retain the heritage look in the interiors,” said Subhajit Datta, a member of Twins Tour which offers guided walking tours in north Calcutta. 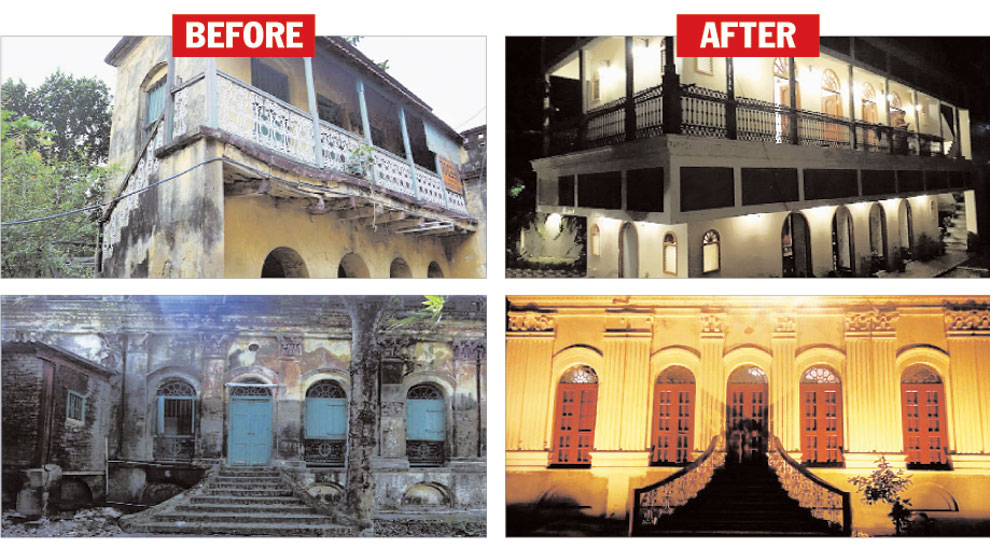 The Daws have tied twins Subhajit and Abhijit for marketing the property as the Rasbari Garden House. Room rates have been fixed at Rs 3,500 with breakfast. “We are offering spiritual tourism,” says Abhijit. Only vegetarian meals are offered. The open space on the river bank can be separately let out for picnics too.

A single-storeyed café has been built next to the parking space where local residents can meet over a cuppa. Bengali meals will be catered from a facility just across the river.

The baithakkhana (outhouse) stands in a dilapidated condition right at the end of the property. “We will plough back money once tourism takes off here. It will take at least three years to complete renovation of the entire property,” Daw says.

The property is administered by the Shibkrishna Daw Debuttar Estate that Purnachandra had set up for the upkeep of Rasbari. “But maintenance costs are so high that we were having a hard time. We did not want to demolish the structures. So I suggested to my father that we could try to monetise the property this way.” It helped that Asim Daw, being the senior-most member of the trust, had decision-making powers vested in him by the estate rules.

Two major festivals are held annually centred around the temple complex — Janmastami and Ras. Asim Dawn, now 79, recalls how whole-night jatras used to be held in front of Rasmancha, where the idols would be housed, on the third night of the festival. “Men played women’s roles too. Our mothers used to watch the performances from behind lacy curtains. Fireworks would be burst in front of the natmandir. Even now 200-250 people partake of khichudi bhog daily during the four days of the festival. Earlier a month-long fair would be held too. But now we don’t allow that in the complex. It is held on Daw Temple Road outside,” the family patriarch said.