Game of survival for the 1,200-odd residents of this small patch 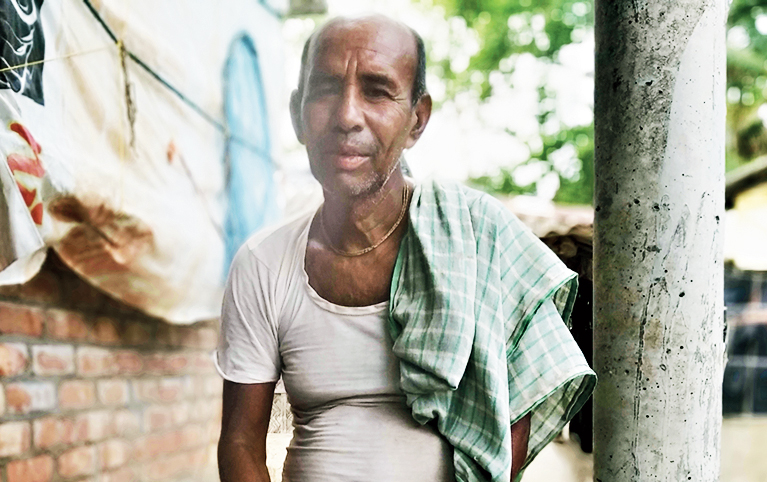 Fear hung heavy on Monday at Nalkora village in Sandeshkhali’s Hatgachi where four people had been feared killed in a fierce clash between Trinamul and BJP activists on Saturday evening.

“There is a continuous sense of scare that men armed with rods and guns may barge into the house anytime,” said Kalipada Mandal in his late 60s, sitting on the courtyard of his modest home. His granddaughter Moushumi was sitting near his feet. “We haven’t been able to sleep properly for the past two days.”

Nalkora, with two temples side by side, is hemmed in by villages like Sheikh Para and Tasleem Para.

Since Saturday’s killings, motorcycle-borne youths, some with tika on their forehead, have made several rounds. Brick-lanes, lined with trees where children would play around under shades and ducklings would slip in and out of waters, was deserted on Monday.

But, for the 1,200-odd residents of this small patch, life has suddenly turned out to be a game of survival. Many who were out of the village on Saturday have gone to their relatives houses in far-off areas, instead of returning to Hatgachi. A few others left homes on Sunday.

Rakesh Mondal and Chottu Mondal for instance have not returned home since their visit to Calcutta. Others like Krishnapada, Bhola and Gautam have opted to stay back at their relatives’ houses to stay safe.

“Relatives have been calling up constantly. They are asking us to come over and stay. We know that isn’t a solution. But you feel afraid of staying here, particularly at night,” said another resident Milon Mandal.

The Basirhat district police have decided to keep a police picket for the next few days in the area. Police vans have been stationed around the two temples of the locality to keep a watch on any suspicious movements.

“We have no clue when normalcy would return,” said Bhairabi Mondal in her early 70s. Debdas Mondal, the youth missing from the locality, is her nephew.

“These days, we see so many new faces. They keep moving around. Can’t even dare to inquire about their identities.”

Villagers say they have no trust in the police. For most, the evenings now mean preparing for a nightlong vigil. “Once the force is withdrawn, if armed gangs attack at night, what would we do?” asks Aloka Mondal, who has been a resident of the village for three decades. Her daughter and son-in-law had turned up on Saturday last. They have returned saying they won’t be back till the dust settles.