The mayor of Calcutta thinks that the heritage value of a century-old Art Deco theatre in the city is "bogus". 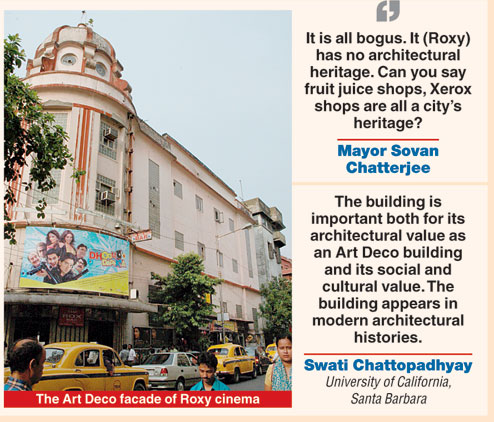 The mayor of Calcutta thinks that the heritage value of a century-old Art Deco theatre in the city is "bogus".

At a mayoral council meeting at the beginning of the month, mayor Sovan Chatterjee announced that the status of the theatre Roxy, which is on the heritage list of the Calcutta Municipal Corporation, will be downgraded from Grade IIA to Grade III.

This will make Roxy eligible for demolition, which the mayor wants, to create more office space for the civic body: "to give better service to people".

"It is all bogus. It (Roxy) has no architectural heritage. Can you say fruit juice shops, Xerox shops are all a city's heritage? We need space to run the office to give better service to the people. It is now certain that I will take over the hall and construct a new building," the mayor told Metro later.

The mayor's announcement sparked protests. A campaign has been launched by the newly-formed Calcutta Architectural Legacies (CAL) to save Roxy, built in 1908 by Maurice Bandman.

CAL, led by writer Amit Chaudhuri, with Intach and PUBLIC, organisations that work to preserve the city's heritage, is considering legal action to prevent Roxy's demolition.

If the mayor thinks Roxy's heritage value is "bogus", there are many who do not agree. Says Swati Chattopadhyay, who teaches history of art and architecture at the University of California, Santa Barbara: "The building is important both for its architectural value as an Art Deco building and its social and cultural value. The building appears in modern architectural histories, including Jon Lang's A Concise History of Modern Architecture in India (2002), for its importance among the Art Deco buildings in India, and for what it signals about architectural modernity."

Others who "performed at the Empire include Harry Lauder, Dame Clara Butt, Anna Pavlova and Marie Tempest, and 'a frightened amateur Merle Oberon stared across the footlights'," she adds, the last reference coming from Geoffrey Moorehouse.

The mayor, however, wants to demolish the building and set up a structure that will be utilised for the corporation's use. Existing shop-owners and other occupants will be rehabilitated. The only thing that will vanish will be the domed, old building.

The downgrade allows it to be demolished.

Activists point out heritage structures are being routinely destroyed, without the CMC batting an eyelid, when it is not actively encouraging it.

G.M. Kapur of Intach rattles off names of heritage buildings, including Grade I structures, which have been destroyed (see box) in the recent past.

He referred to the 2015 demolition of a place of worship that was listed as a Grade I heritage building. The CMC said it could not have prevented the demolition because the local community, for whom the shrine was built, wanted to pull it down to build a new shrine.

Kapur rejected the CMC's contention, pointing out the role the civic body could have played.

During 1997-98, after the high court gave the order to the Life Insurance Corporation of India to not demolish the Metropolitan Building, the CMC sent a notice to the LIC that if it did not maintain the building the civic body would take over the management of the property. "This shows the power the CMC has," says Kapur.

Demolition is the most drastic form of destruction, but the process the CMC often undertakes to "downgrade" or "delist" (when a building is taken off the heritage list) is surrounded in mystery. The CMC is not clear about what procedure is followed to take such action or what the reasons are leading to it.

"Buildings are delisted surreptitiously," says Bonani Kakkar of PUBLIC, which, like Intach, has moved court several times - and sometimes won - to save old Calcutta buildings. She too provides a list of heritage buildings either demolished or under threat.

Kapur speaks of a particularly strange case of "delisting". "The arched gateway of the Archbishop's house at 5 Russell Street had been demolished long before and under pressure from activists, the CMC had reconstructed it again. In February 2009, a notification on the heritage list listed both the gateway and the building as heritage property. In October 2009 it came to be known that the gateway had been 'delisted'. So Intach filed a PIL asking what had happened in these months to change the historicity of the building. The high court asked the CMC to 're-list' the gateway," says Kapur.

According to CMC engineer Sushanta Ghosh, five heritage buildings have been downgraded since 2007 to facilitate real estate promotion - four of them during Chatterjee's tenure (see box).

Like the downgrading or delisting procedures, the 12-member CMC heritage committee, which should be the panel deciding on heritage-related matters, is largely invisible. It has one famous personality, though: film producer Srikant Mohta.

"There is something seriously wrong with the way heritage protection is functioning in the city," says Amit Chaudhuri. "What is the law? Who are the people on the KMC committee? Why was the heritage commission disbanded?" he asks.

"Why is the mayor, instead of protecting it, so hostile to heritage?"