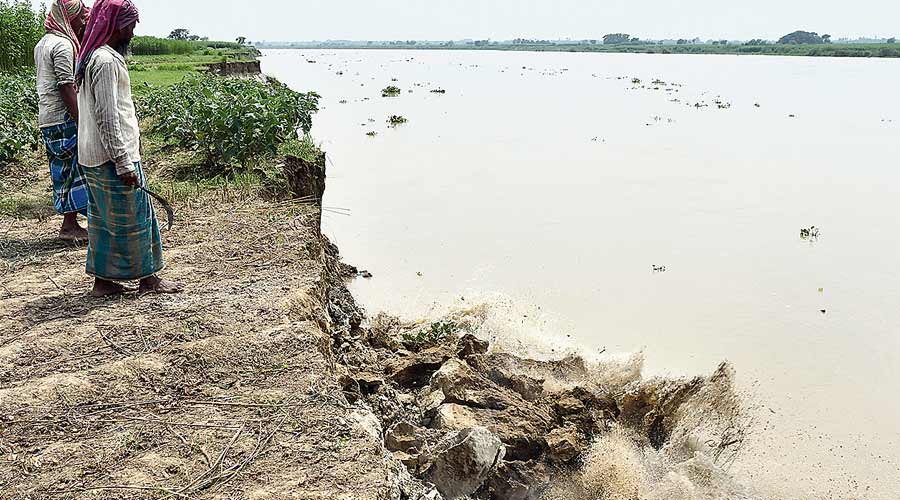 Mamata Banerjee wrote to Prime Minister Narendra Modi on Monday, urging him to reconsider the 2017 decision of curtailing the work jurisdiction of the Farakka Barrage Project Authority and restore its original jurisdiction to prevent erosion along the Ganga in Malda, Murshidabad and Nadia districts.

“It is becoming increasingly difficult for the state government to arrange funds required for new bank protection works. The matter was raised during the visit of a delegation of Council of Ministers from the State to the Union Minister of Jal Shakti on 31.08.2021. Again no response has been received from the Central Government,” reads the letter of the chief minister.

Officials said the chief minister wanted to point out that as the work jurisdiction had been reduced, the onus of repairing embankments and carrying out desiltation was passed on to the Bengal government and it was not possible for the state to shoulder the additional burden.

“As the FBPA did not undertake any work over the past few years, the erosion could not be checked even though the state had undertaken some repairs,” said a senior official.

The chief minister explained in her letter why the erosion along the Ganga had become a major problem in those Bengal districts.

“The severity of the problem of erosion along this river system in West Bengal can be appreciated from the fact that almost 2,800 hectares of fertile land has been engulfed by the river and there have been damages to public and private properties to the tune of Rs 1,000 crore during last 15 years,” Mamata wrote.

The letter said the chief minister had urged the Centre to withdraw its decision of curtailing the work jurisdiction of the FBPA but it did not yield any positive result.

The chief minister also said as the FBPA did not take up any substantial work, the state had to take up urgent bank protection work at 31 vulnerable locations in the past four years at a cost of Rs 168.47 crore to protect thousands of flood victims in Malda, Murshidabad and Nadia districts.

“Again, due to the monsoon of 2021, further anti-erosion works along the river Ganga-Padma for a length of 9.9km has recently been taken up at a cost of Rs 80.67 crore. However, this is not going to suffice. The actual requirement of funds at the ground,” the chief minister wrote.

Sources at Nabanna said Mamata had written the letter to keep the Centre under pressure as the stressed state exchequer did not allow the Bengal government to spend handsomely to take up anti-erosion works in the area.

“If the Centre does not come forward, the erosion would continue and could be a political issue in those areas ahead of the 2024 Lok Sabha polls. So, the chief minister has put the ball on the Centre’s court,” said a source.