Party headquarters to remain closed for the time being 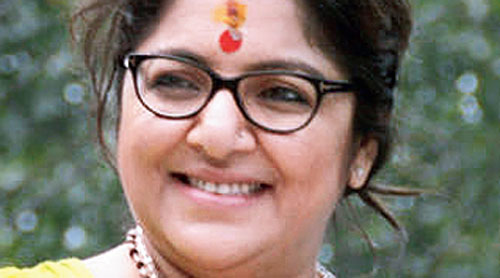 The Bengal BJP has decided to keep its headquarters here virtually closed for sometime after its general secretary and MP Locket Chatterjee tested positive for Covid-19.

Swab samples have been collected from several other BJP leaders and the party is trying to identify workers who have come in contact with Chatterjee, said a source.

Chatterjee made a twitter post, saying she had been affected by the novel coronavirus after keeping unwell for some time. The MP tweeted that she had been in self-isolation for the past one week. She hasn’t been hospitalised yet.

“Most leaders are not coming to the party headquarters and we have already decided that no access will be granted to people. The headquarters (at 6 Muralidhar Sen Lane in Calcutta) will be open for official work only,” said state BJP president Dilip Ghosh.

The entrance to the party headquarters remained closed for most part of Friday. According to multiple BJP sources, the door will be kept closed for the time being.

“We shall open the door again on July 6 on the birth anniversary of Shyamaprasad Mukherjee, when national BJP president J.P. Nadda will address a virtual rally for Bengal,” a source said.

Kishore Kar, the president of the BJP’s Calcutta north suburban district, was tested positive for the novel coronavirus on Thursday. He is undergoing treatment at a private hospital in Salt Lake.

Since the BJP headquarters reopened at the end of May, party workers have time and again flouted Covid-19 protocols on the premises. The Telegraph had reported that at least 50 people, many without masks, had jostled inside a room at the headquarters to congratulate new office-bearers on July 1.

A notice reading, “Admission Restricted and Regulated” has been hanging on the main door since May 19. However, BJP workers appeared to have paid little attention to the notice.

While other political parties, including the Trinamul Congress, have restricted their activities to online meetings and selective engagement with common people, BJP leaders were seen coming in close contact with their supporters.

MP  Chatterjee had visited Sandeshkhali in South-24 Parganas on June 8 to commemorate the death anniversary of three BJP workers. According to a source, the families of the deceased had come in close proximity to Chatterjee. Recently, she had also visited Bagnan in Howrah district to meet a victim of sexual abuse whose mother had lost her life trying to save the daughter.

After being tested negative on the first test, Chatterjee decided to get tested again when her fever refused to recede. Sayantan Basu, another state BJP general secretary, also underwent swab test along with two members of his family. Basu said all the three had been tested negative.

While BJP leaders, including Ghosh and Mukul Roy, have been keeping away from the party headquarters for long amid the pandemic, others such as Rahul Sinha continue to visit the office and meet people. Sinha, who is also a national secretary, had come to the office on Friday. “People who have symptoms should get tested but I am perfectly alright,” Sinha told The Telegraph.

He added that he would be at the headquarters on Saturday as well.

A section of BJP workers was unhappy that it took long time for the strict imposition of Covid-19-related health protocol.

They said they were scared of the gatherings that generally happened inside the party office which has paucity of space.

“At the all-party meeting in Nabanna in June, our state president had accused Trinamul leaders of violating Covid-19 protocol which he said was the reason for so many in the ruling party contracting the coronavirus . Now that one of our own MPs has been detected with the virus, what will he say?” asked a BJP supporter who didn’t want to be named.